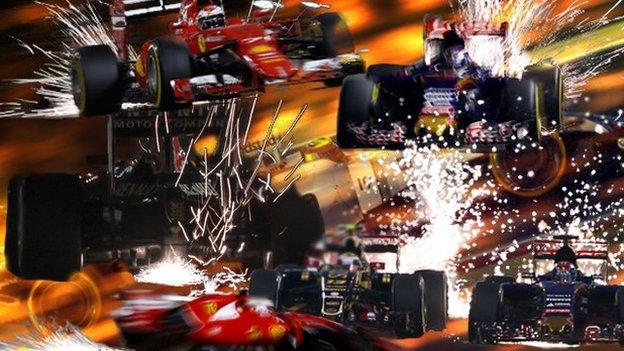 One of the most striking things about watching F1 coverage from the time of Ayrton Senna and Nigel Mansell was the drama created by their sparking cars.

Alongside the reintroduction of turbos and fierce, inter-team rivalry, F1 became fully retro in 2015 when titanium skid blocks were fitted to the underneath of the machines.

The return of sparks may not have solely been about increasing the spectacle of the sport - there was also a safety factor - but there is no doubting that their appearance has been universally welcomed.

Night races, in particular, have been a real treat for the eyes when it comes to sparks - part of BBC F1's list of who (or what) has inspired us this season.

In Bahrain, the first race under floodlights in 2015, Jenson Button failed to make the start of the grand prix because of technical problems, giving him a front-row seat of the lightshow. What he saw thrilled him. "Loving the sparks from the car," he tweeted.

It's been an opinion shared by his fellow drivers, who have not had a bad word to say about the aesthetic addition.

The fireworks by night continued at the Singapore Grand Prix and at the season-ending race in Abu Dhabi.

There is plenty going on behind the scenes of Formula 1 to try to improve the show after another season of Mercedes dominance, but nothing will be more eye-catching than cars spitting hot metal across the tarmac.