The victory was the German's third in a row, giving him a boost ahead of 2016 after Hamilton won the title last month with three races still to go.

Hamilton tried an off-set race strategy in an attempt to beat his team-mate but Rosberg had sufficient pace in hand.

The result easily secured the Finn fourth place in the championship behind Hamilton, Rosberg and Vettel after Raikkonen started the race a point behind his countryman Valtteri Bottas of Williams.

Rosberg on a roll

Hamilton had been determined coming into this final race to try to beat Rosberg and stop the German's run of five consecutive poles and two wins.

But experimenting with the car's set-up and tweaking an aspect of the suspension before qualifying backfired and Rosberg beat him to pole by more than 0.3 seconds.

Rosberg built up a five-second lead before his first pit stop on lap 10 but Hamilton came back at him in the second stint, closing the gap to just over a second before Rosberg's second stop on lap 31 of 55.

Hamilton then rolled the dice - he and engineer Peter Bonnington decided to delay his second stop to enable him to run harder for a shorter distance on his final set of tyres.

The decision was based on Hamilton's inability to pass Rosberg when following closely behind in the previous two races in Mexico and Brazil.

The idea was to allow Hamilton to have fresher tyres than Rosberg for the closing laps and therefore have a better chance to overtake.

Hamilton asked Bonnington before his final stop whether it was worth trying not to stop again and hold off Rosberg if he caught him. But he was told it was a "gamble that I guarantee would not pay off".

Hamilton made his final stop on lap 41, and rejoined 11.5 seconds behind his team-mate with 14 laps to go.

"Pace is looking good," Bonnington said on Hamilton's second lap out of the pits, but although the world champion took more than a second off Rosberg on some laps in an initial burst of speed, his gains dropped off as the tyres wore out.

Rosberg was able to measure out his tyre life and pace and comfortably held Hamilton at arm's length to take his sixth victory of the year to Hamilton's 10.

"Austin was the low-point, it was a tough weekend," said Rosberg on the podium. "Since then I have come back stronger and I am excited about the way the end of the season went. Its great to end the season like this and go on holiday like this." 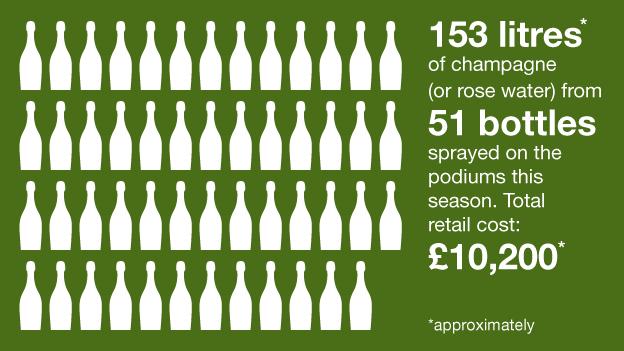 Hamilton said: "In hindsight, once Nico pitted I probably would have backed off and made the tyres go a lot longer. The tyres were fine at the end and I think I could have made them last. Going long was probably not the best thing to do but we gave it a try and I did the best I could."

"It has been an amazing year. I am happy. I am happy it is over for sure."

Another Yas Marina fightback for Vettel

Raikkonen drove a controlled race to take third but the action at Ferrari revolved around team-mate Vettel, who started 15th after the team had made an error in qualifying and miscalculated the time needed to progress beyond the first knock-out session.

In a mirror of his fightback following a pit lane start here in 2012, but without the luck he had in that drive when he hit a trackside sign and benefited from a safety car, Vettel lost no time in making up places.

He was quickly up into the top six and his race developed into a battle with Perez, who had impressed by qualifying the Force India fourth.

Vettel emerged from his second pit stop on lap 39 on the super-soft tyres about five seconds behind Perez and caught the Mexican within four laps, cruising past the Force India into Turn Nine shortly afterwards.

Red Bull's Daniel Ricciardo finished sixth on a weekend when it emerged his team had finally secured a deal for engines for next season - they will continue with Renault.

McLaren's Jenson Button took 13th, one place down on his qualifying position, while team-mate Fernando Alonso had a torrid time on a weekend that had been dominated with speculation about the two-time champion's future.

Alonso collided with Lotus's Pastor Maldonado at the start, pitted for a new front wing on lap one, then had to serve a drive-through penalty for the touch.

He managed to catch and pass the Manor cars but was a minute behind the rest of the field and midway through the race came on the radio to say he would retire the car if there was not a safety car to allow him to close up.

He did not, though, and continued to the end to finish 17th.