He added that Ferrari had written a legal letter saying governing body the FIA did not have the right to grant Ecclestone a "mandate" to make changes.

A meeting of the FIA's World Council last week voted through powers for Ecclestone and FIA president Jean Todt "to make recommendations and decisions regarding a number of pressing issues in F1 such as governance, power-units and cost reduction".

Ecclestone's remarks are the latest stage in an increasingly bitter fight for power and control in F1.

In an exclusive interview with BBC Sport, Ecclestone also:

Ecclestone says the influence of Mercedes and Ferrari as engine suppliers to more than half the grid means they have "complete control" of the F1 Commission, the final stage of the legislative process before the World Council.

He says when Mercedes F1 boss Toto Wolff "puts his hand up and says Christmas is going to be 26 December, everybody agrees - same with Ferrari".

Ecclestone added: "There is all sorts of things we know we can do and should do to make F1 back on the road where it should be, because we are in show business.

"We are there to entertain the public. We are not there to put on a show for Mercedes to demonstrate and sell their cars. Or Ferrari."

He said Ferrari had written a lawyer's letter to the FIA saying the governing body did not have the right to grant Ecclestone and Todt their new mandate because it contravened the team's contracts with F1.

Ecclestone added: "So the only thing we could do is to ignore what Ferrari have said and carry on with it and say: 'You've got a choice - you can leave or go to arbitration and see what the arbitrators think.'"

He said he "didn't know" if he would pursue this route but it was "the obvious thing".

"I think if we went to arbitration, we'd win easy," Ecclestone said.

Ferrari said they believed Ecclestone was referring to an email "clarifying the positions already expressed at the World Council".

They said their "intention is simply to make sure that the governance principles" established by Ecclestone and the FIA and agreed with other stakeholders in F1 "continue to be duly complied with".

Ferrari said Ecclestone's contention that it and Mercedes controlled the F1 Commission was "an arguable assumption", adding: "As far as Ferrari are concerned, Christmas is going to be 25 December this year and in the future."

Lack of competition at the front 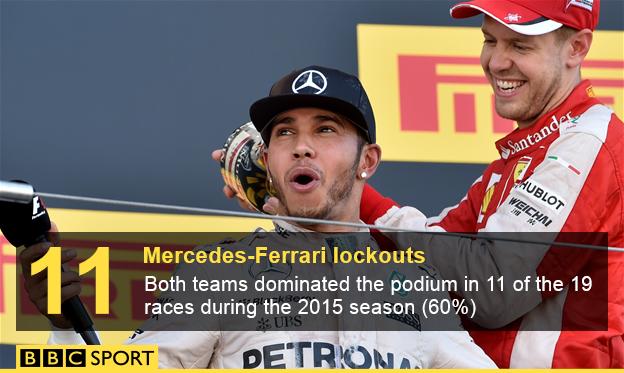 Ecclestone drew a comparison between Mercedes' domination and that of McLaren-Honda in 1988, when Ayrton Senna and Alain Prost won 15 of the 16 races between them.

He said that while Senna won eight and Prost seven, ensuring a close championship, the problem with Mercedes was that Hamilton was much more dominant.

Last year, Hamilton won 11 races to Rosberg's five and this year the Briton won 10 of the first 16 to clinch the title with three races still to go.

Asked if he felt Mercedes should have, for example, Fernando Alonso, Sebastian Vettel or Daniel Ricciardo in the second car rather than Rosberg, Ecclestone said: "Well, it would probably be a lot better, you're right. Because I know they had probably a second, second-and-a-half a lap in their pocket these last few races.

"It shows you Lewis has been able to use that and Rosberg obviously hasn't. He used it in the last three races because Lewis I think was sleeping."

What does Ecclestone want to do?

Ecclestone believes F1's turbo hybrid engines are bad for the sport, arguing they are too expensive and complex.

He said Mercedes did not want to change the engine rules because of their dominant position and that Ferrari were "sort of following with them". He alleged Mercedes had "given an awful lot of help" to Ferrari with their engine design.

Ferrari described Ecclestone's accusation as "odd", adding: "To us, Mercedes is - and has always been - a competitor to beat, and we believe they think the same of Ferrari."

Mercedes are currently taking legal action against a former employee who they feared would take their engine secrets to Ferrari.

Ecclestone says he wants to introduce "a much simpler engine" that could be sold to customer teams for "6-7m euros maximum".

The cost of an existing engine to a customer team ranges from 18-23m euros.

Ecclestone and Todt had previously proposed introducing this new engine alongside the turbo hybrids using an 'equivalency formula'.

But he now says they want a new design to replace the current engines: "Regulations for one engine that anyone can make. But it would be the same for everybody. Nobody would have an advantage or disadvantage."

He said he "didn't care" what this design was, as long as it was "simpler therefore cheaper".

He said the current engines were of benefit only to the sales of the manufacturers involved.

"We're helping a manufacturer. Because it doesn't make a lot of difference to Ferrari with the sort of engines they make," he said. "It helps Mercedes.

Mercedes declined to give a direct response to Ecclestone's observations, but it pointed out that:

• it has competed in 25 F1 seasons, almost 40% of the championship's history

• all four of the car manufacturers involved in F1 have competed in at least 25 seasons, with Ferrari doing 66, Renault 37, Mercedes and Honda 25. They are four of the five most loyal in the sport's history.