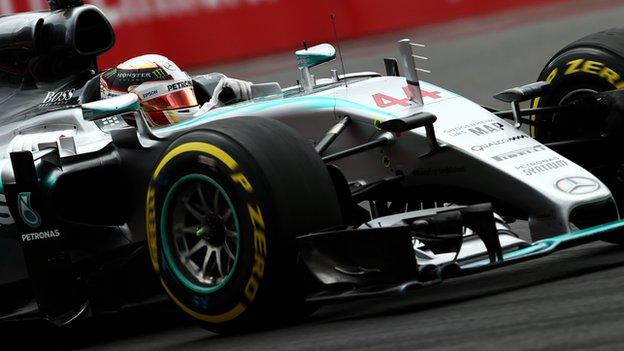 Some say Formula 1 in 2015 didn't possess the drama of the previous year, thanks to Lewis Hamilton's early title win.

But, like any season in this fascinating sport, there was plenty going on around Hamilton to keep interest as high as ever.

After clinching his second title at the final race of 2014, Hamilton came out of the blocks flying at the start of the year.

He had tidied up everything that was weak last year, when he was very unstable in qualifying, and was so strong at the beginning of this season. He nailed qualifying and then delivered in the races.

Hamilton romped away with the year, and it was only when he had won the title that he lifted off a little in my opinion that team-mate Nico Rosberg got himself in a better place mentally and got on terms.

I'm pretty certain the reason Hamilton could do that was because the weight and pressure of expectation had been lifted off his shoulders by finally winning his second title, six years after his first.

Hamilton came very close to winning the championship in his debut season in 2007, did win it in his second but then had to deal with a series of disappointments.

He was still fast, but on track the McLaren was not as good as the Red Bull or often reliable enough, and off track he fell out with his dad and the authorities.

It looked like he had fallen out of love with so many parts of the sport and his life. Those things are not easy to deal with.

He needed to go to Mercedes to find himself - and he did that in Abu Dhabi 2014. All that pressure of "will I win another title?" was gone. On the other side of the garage, that fight also took a lot of energy out of Rosberg.

Hamilton put a lot of effort into making sure he won the title again in 2015. The intensity was very high, and that's probably why he lifted off the throttle a bit when he did.

The world champions re-wrote records this season. They led 86% of all laps. They equalled their own record of 16 wins and that of 18 poles held jointly with Red Bull. They set all-time records for 12 one-twos, 31 podium finishes, most points and the highest percentage of points in a season.

Last year, they built a car that had no equal, and this year they optimised it further.

Red Bull got close in terms of aerodynamics, but the Mercedes was still mechanically better than any other car and had a consistency and reliability no other car had.

The team's only real area of weakness was operationally, when they out-thought themselves on occasions.

An example was when they messed up the strategy on Hamilton's car and lost him the race in Monaco.

There will likely be something of a changing of the guard in F1 at the end of 2016. Kimi Raikkonen is on a one-year deal at Ferrari. Jenson Button's McLaren contract runs out. Both are into their late 30s.

Fernando Alonso is also pretty disgruntled, although his McLaren contract lasts until the end of 2017 and he is more than likely to stick that out - and possibly do another there or somewhere else, too.

Meanwhile, the next generation is announcing itself.

We have already discussed the highly impressive Toro Rosso pairing of Max Verstappen and Carlos Sainz.

But there was also Sauber's Felipe Nasr, who made an impressive debut in Melbourne did a pretty good job through to the end of the season in not the easiest of cars with zero development.

And of course there was Daniil Kvyat at Red Bull. It's easy to forget, but the Russian was in only his second season and he was thrown in at the deep end alongside Daniel Ricciardo following Sebastian Vettel's switch to Ferrari.

Ricciardo had his feet nicely under the table after effectively seeing Vettel off.

Kvyat was under massive pressure - and Red Bull's motorsport boss Helmut Marko applies it with a purpose, to see if his young drivers have what it takes to handle life at the sharp end.

But after a shaky start Kvyat, in an admittedly difficult car, came on strong and ended the season with more points than Ricciardo.

Not before time, but Ferrari bounced back after a dreadful season in 2014.

They had so many changes - they got rid of two team bosses, and long-time president of Luca Di Montezemolo, Alonso left, engineering director Pat Fry and several other senior figures were sacked and James Allison has not been there long in his role as technical director.

They started the season saying they would win two or three races and they did exactly what they promised and kept Mercedes honest more often than expected.

Their weak point remains qualifying. But, as we saw in Malaysia, if they can get among the Mercedes on the grid, they can race among them, too.

Everyone was pleased that, after skirting with oblivion over the winter, Manor made it into 2015.

But to see them sitting in the garage in Australia with no hope of going out was a big disappointment - for them as well as everyone else, because of the effort they had made to get there.

At that point, they were looking unlikely to make it halfway through the year. But team principal John Booth and sporting director and president Graeme Lowdon, both real racers, did a good job to make it to the end of the year - only to leave the team.

Owner Stephen Fitzpatrick now has to replace them and move on into 2016, which will be no easy task.

It was a big disappointment to go to the final race with the only thing up for grabs being the destiny of fourth place in the championship between Raikkonen and Williams's Valtteri Bottas.

No wonder the viewing figures were down a bit.

I'm no advocate of double points, the controversial one-off introduction for 2014, but at least it was something to talk about.

Most importantly, that situation was evidence of the over-predictability of the 2015 season, which F1 could do without next year.

From a fourth consecutive title double in 2013, to three wins in 2014, to a couple of podium finishes this year; Red Bull have fallen a long way.

A lot of that was down to Renault's failure to improve their engine, so if anything it went backwards relative to the competition.

At the same time, though, the Red Bull chassis was also found wanting for the first time in six years - at least until a mid-season upgrade,

Their disappearance only made it easier for Mercedes to dominate and unfortunately at this stage it is hard to see them doing any better in 2016, with Renault still working on improving their engine department.

The main controversy of the season was off-track not on it, with constant arguments about the engine rules.

F1 is two years into an engine regulation and it needs new companies coming in. That is never going to happen while the rules are changing, because big companies need stability. They don't want the risk of their investment being negated by another set of rules.

I'm not saying the engine rules are necessarily right or wrong, but teams should not be rubbishing them in public.

Germany is one of the longest-serving races on the calendar, and it did not happen in 2015 because of financial problems at the Nurburgring - which is one of the world's most iconic and historic circuits.

Germany has the world champion team, a four-time champion driver and a title contender, yet they did not have a race.

Bizarrely, though, the Nurburgring did host a World Endurance Championship race weekend - which attracted 62,000 spectators. So the interest is there.

But in F1 the cost is too high - and that's because the sanctioning fee is too high.

Races all over the world are struggling for the same reason - the Italian Grand Prix, another historic event, is also under threat, as is the very popular US race in Austin, Texas.

And yet instead F1 goes to new countries with no culture of the sport - such as Korea, India and Azerbaijan - which all too easily disappear once they realise they cannot afford it either.

The sport badly needs to look at that.

Money troubles - of one kind or another

Sauber found itself in a very unpleasant situation at the first race of the season. Having signed four drivers for two seats, they were taken to court during the race weekend by one of the drivers who was under contract - Giedo Van Der Garde.

As an ex-driver, I found Sauber's behaviour very hard to stomach.

They found themselves in that situation because they needed the money each driver brought when they signed them to survive.

But ultimately, they had to pay off Van Der Garde. It was a very expensive mistake - and it cost the Dutchman any chance of sitting in an F1 car again.

This situation was a very public illustration of the financial plight of the smaller teams.

This resulted in a number of them needing advances on their prize money to see them through the winter - and a complaint by two teams to the European Union about anti-competitive practices in F1.

There was too much washing of dirty laundry in public.

That went for the dispute over engines, as well as Red Bull rowing with Renault and conducting a very public search for a replacement - which failed.

I prefer to solve problems behind closed doors. Obviously that can't always happen, but there were too many little grenades flying around in 2015.

McLaren-Honda's travails were depressing for everyone to see - not just those directly involved.

It's easy to point the finger at Honda, and ultimately its engine was the biggest performance deficit.

But McLaren courted Honda, got into bed with them and they decided on the packaging of the car and engine together. And that 'size zero' car was at least partly the cause of the problems.

The image in my head when I think of McLaren-Honda is Ayrton Senna winning the world championship, not two of the best drivers in the world struggling to take a team to ninth overall.

There needs to be change. The good thing is both parties seem to understand that now; the only question is how long it will be before they can do anything about it.

And finally, a happy ending

Lotus's situation was very much ugly for most of 2015. The team, which won four world titles as Benetton and Renault, was on its last legs, with the owners putting in as little money as possible as they sought to finalise a sale to Renault.

There were a series of unfortunate moments, including bailiffs in attendance as Romain Grosjean scored the team's only podium in Belgium.

But finally, as the season ended, the Renault buy-out was confirmed. And as someone who drove for that team in both its previous guises and knows how much quality still remains there, I am very happy about that.