Red Bull chief technical officer Adrian Newey admits the team is likely to lose more ground to Mercedes and Ferrari next season, and has criticised the sport for being too "engine-dominated".(The Hindu)

Pastor Maldonado could blossom in 2016 if he doesn't lose his seat to Kevin Magnussen. (Autosport)

Indonesian driver Rio Naryanto is in line for a race seat at Manor next season - provided he can secure $16m (£11.2m) in financial backing. (NBC Sports)

Haas driver Romain Grosjean revealed on Twitter that he has been keeping his preparations for the 2016 season ticking over - by visiting a watch factory.

Former McLaren driver Kevin Magnussen is set for a return to the sport with Renault poised to bring him in to replace Pastor Maldonado. (Daily Telegraph)

Formula 1 tyre supplier Pirelli is to hold talks with key stakeholders as it wants more track testing to prepare for new regulations in the 2017 season. (Daily Mail)

Romain Grosjean posted on social media: "Guys, it's now official, we will launch our @HaasF1Team car in BCN on the 22nd Feb am. Are you as excited as me?" (Romain Grosjean on Twitter)

Williams deputy team principal Claire Williams wants to be braver in fighting for her team in talks with rival team bosses as she sometimes feels like "the little girl in the room" in the "male-dominated sport". (Associated Press)

The BRDC is no longer under pressure to sell British Grand Prix Formula 1 venue Silverstone, according to president Derek Warwick. (Autosport)

Force India driver Nico Hulkenberg has been at the BBC Studios for filming of Question of Sport earlier this week and said he had "good fun".

New McLaren chief executive Jost Capito expects to have freedom to "do what needs to be done" to revive the team's fortunes when he joins from Volkswagen's successful motorsport arm later this season. (Autosport)

Reigning world champion Lewis Hamilton has revealed on Instagram that he has taken up boxing as he steps up his preparations for the new season.

Meanwhile, Toro Rosso driver Carlos Sainz Jr says he has been training with Spanish triathlete Mario Mola in a bid to shed weight before the start of the new season. (Marca via Inautonews)

Ferrari driver Sebastian Vettel believes the Italian team will be closer to challenging the domination of Mercedes in the 2016 season. (La Gazzetta dello Sport)

German Vettel finished fastest after a two-day test of alternative wet tyres by Pirelli at the Paul Ricard Circuit in France. (Guardian)

Brazilian Felipe Massa posted a photo on Instagram of compatriot and friend Pato, apparently congratulating him on signing for Chelsea. The post reads: "[Pato] I am sure it will be very good for you my bro! Congrats [Chelsea]."

Former F1 driver Gerhard Berger says he "sometimes falls asleep in front of the television" and the sport "needs to be rethought from the ground up" to solve its problems. (Auto Motor und Sport via James Allen on F1)

Ferrari driver Kimi Raikkonen was unconvinced by Pirelli's alternative wet-weather tyres following the opening day of a two-day tyre test at the Paul Ricard Circuit in the south of France. (Autosport)

Ricciardo put the following message and picture on Instagram saying: "Happy Australia day!!! Top picture was a week ago. Bottom was yesterday. What a contrast! Would love to be back home today soaking up the sun. Enjoy it for me fellow strayans." 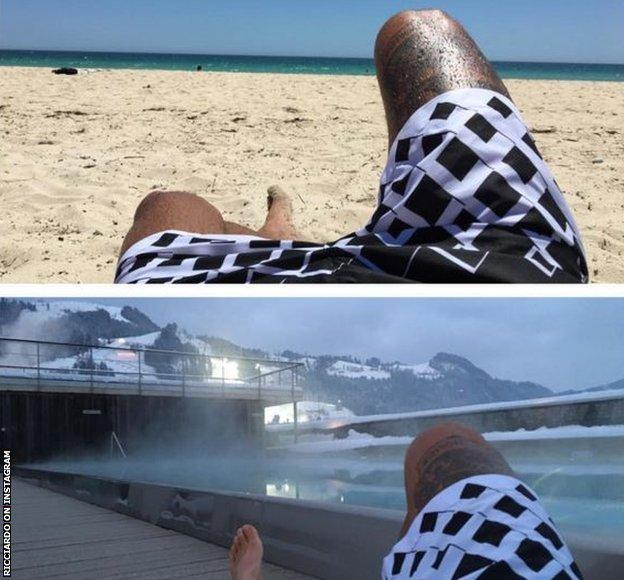 Red Bull driver Daniel Ricciardo wanted to race in last year's Le Mans 24-hour race but his team did not want him to.(Pitpass.com)

The Indonesian government will make up the funding shortfall as Rio Haryanto's prospects of making his F1 debut with Manor in 2016 moved a step closer. (GPupdate.net)