Pastor Maldonado - the professional racing driver more famous for not being able to drive - is leaving F1.

The 30-year-old Venezuelan clocked up 29 retirements, endless on-track incidents and that memorable 2012 Spanish Grand Prix win in five seasons. So why will we miss him?

Because he crashed... a lot

He was nicknamed 'Crashtor' by his critics and became a cult figure for, well, just crashing.

In a sport that can sometimes lack drama and excitement, Maldonado was on a one-man mission to reverse F1's image.

Out of 96 grands prix, there were 29 retirements, and he incurred 39 penalties in his colourful F1 career, that's one every 2.4 races and 12 were for causing a collision.

And he created some spectacular moments

"Woah, what was what?" asked Sauber's Mexican driver Esteban Gutierrez after Maldonado smashed into his car sending it into a barrel-roll at the Bahrain Grand Prix in 2014.

Maldonado was given a warning and handed a five-place grid penalty for the next race in China.

There was occasional brilliance...

Maldonado won a career high 45 points that season, but his maiden win remains the only time he reached the podium.

BBC Sport's chief F1 writer Andrew Benson recalls "that one amazing afternoon in 2012, when the stars aligned and Maldonado won a grand prix.

"How that happened, no-one has ever satisfactorily been able to explain. Some thought it might mark a breakthrough - only for Maldonado to spend the rest of that season routinely bouncing off things as usual."

You're driving a 200mph car, you keep your eyes on the road right? Not if you're Maldonado.

In 2014 during the first practice for the Chinese Grand Prix he veered off the road and nearly crashed after getting distracted making adjustments on his steering wheel.

He inspired a sub-culture

Hang on, with all this crashing, will the F1 purists really miss him?

Asked in a recent interview who was the worst F1 racer, the Australian former Red Bull driver replied: "Probably Maldonado, he's out of his depth and just shouldn't be there."

The Venezuelan earned his seat with the size of his chequebook, rather than his talent and Andrew Benson says that's a strong reason why his departure "will not be widely mourned".

"He was quite quick. Unpredictable only in so far as you were never quite sure when the next embarrassing cock-up would happen. So wild he became a laughing stock. And, fundamentally, not really good enough." 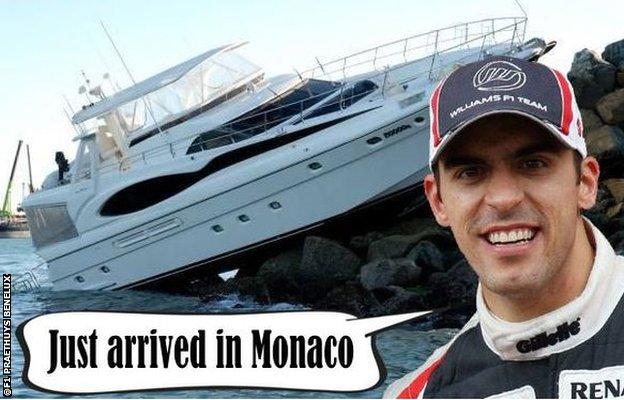 "They can say whatever they want. I'm here to do my best, and to work," Maldonado told the Telegraph last year.

"When Pastor crashes, it's big news, When the other people crash, there is no news. It's like this.

So adios Pastor, make sure you come back soon.