Daniel Ricciardo described his Chinese Grand Prix comeback drive as "one of the best races of his life". (Fox Sports)

Sauber boss Monisha Kaltenborn has denied suggestions that the Swiss team is in danger of failing to finish the 2016 season. (Motorsport.com)

Jenson Button hopes strategy and not a lack of pace was to blame for his disappointing 13th-place finish at the Chinese Grand Prix.(ESPN)

Kimi Raikkonen says the first-lap crash involving himself and Ferrari team-mate Sebastian Vettel was "not a disaster". (Planet-F1)

Toro Rosso's Max Verstappen tweeted a picture of him at breakfast. The Duthcman, who was to qualify ninth on the grid, said: "Getting ready for qualifying day! It's a rainy one but we like that 😎"

Red Bull driver Daniel Ricciardo's mum might be in two minds about wanting her son to win in China after his boss Christian Horner revealed they had a bet that if he wins the race he has to keep his new haircut for a year. Horner said the haircut was something "his mother will kill him for". (Fox Sports)

Horner also says that Red Bull may trial its F1 cockpit protection device at some point over the Russian Grand Prix weekend. (Eurosport)

Current F1 drivers' champion Lewis Hamilton will need to back up his recent comments that he is more mentally resilient when he starts last of the grid in China after ERS problems. (Telegraph)

McLaren is set to open negotiations with Fernando Alonso about renewing his contract beyond the end of next year. (Inautonews via Marca)

Kimi Raikkonen says it is a "shame" he qualified third for the Chinese Grand Prix believing he had a chance to put his Ferrari on pole. (Crash.net)

Sir Jackie Stewart says that if he was running Mercedes, he would pull the German carmaker out of Formula 1. (Globo Esporte via Inautonews)

Critics who describe the Haas Formula 1 car as a Ferrari in different colours are just jealous, says their driver Romain Grosjean. (Autosport)

Pirelli has released its wind tunnel tyres to F1 teams in a move which will allow them to push on unhindered with designs for 2017.(Motorsport.com)

Former Benetton and Jaguar driver Johnny Herbert stands by his recent criticism of Fernando Alonso, despite the Spaniard's angry reaction.(Marca)

McLaren-Honda driver Jenson Button posted this picture on Instagram of the F1 drivers enjoying a meal together in Shanghai.

Williams has played down any suggestion that its deal with development driver Lance Stroll could be a precursor to his father, fashion entrepreneur Lawrence, becoming a shareholder in the team. (Motorsport.com)

Toro Rosso driver Carlos Sainz believes Red Bull are "as quick as Mercedes, if not more" through medium and low-speed corners. (Autosport)

Williams, Manor and Force India will attempt to complete the season with four engines rather than five to save on the amount they have to pay Mercedes. (Auto Motor und Sport - in German)

Williams driver Felipe Massa was pleased with the reception he received in China, tweeting: "Love you guys #chinesefans".

Mercedes technical chief Paddy Lowe is expecting the use of supersoft tyres at this weekend's Chinese Grand Prix to produce more "extreme" strategies like those seen in Bahrain.(Motorsport)

The Williams deputy team principal Claire Williams has called for a fairer distribution of F1 revenues.(Autosport)

Haas F1 team principal Guenther Steiner says there are "developments coming" as they look to improve their Ferrari-powered VF-16. (Crash.net)

Red Bull's Australian driver Daniel Ricciardo wasn't too impressed after letting a friend have a go at cutting his hair. "We made some late night calls and got Vince over to finish the mess that is seen on the left,"he posted on Instagram. 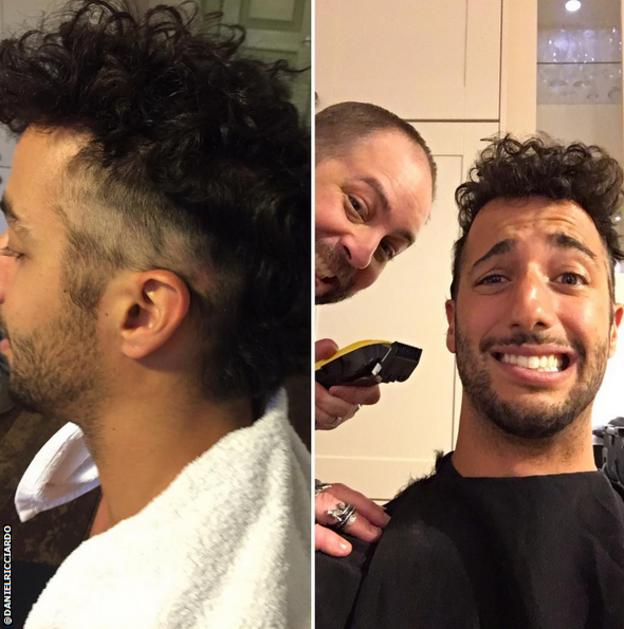 Mercedes boss Toto Wolff has warned that rule changes for 2017 will limit the amount of overtaking seen in races.(ESPN)

Red Bull's Daniel Ricciardo says F1 is no longer thrilling enough, adding that he would like to see drivers not to have to worry about fuel and tyre saving. (Crash.net)

Renault's British driver Jolyon Palmer says he is confident of bouncing back from a "challenging" Bahrain Grand Prix at next weekend's race in China.(Grand Prix Times)

World champion Lewis Hamilton was on the move on Sunday, posting this photo on his Twitter account as he made his way to China. "Another flight. Off to China! See you there!" he wrote.

Mercedes boss Toto Wolff says the addition of more downforce for the 2017 season is the "wrong decision". (Grand Prix Times)

Romain Grosjean says critics who said it was career "suicide" to join the new Haas team have already been proved wrong. (Motorsport.com)

Renault's Kevin Magnussen wants the opportunity to show what he can do in a "normal" race after a frustrating start to the F1 season. (F1i.com)

F1's return to Mexico last year had "maybe the biggest economic impact" on the country since the football World Cup in 1986, say officials. (Autosport)

Mercedes' Nico Rosberg is concerned F1 is heading in the wrong direction with the proposed 2017 regulations and fears overtaking will become even more difficult. (Sky Sports)

Haas F1 driver Romain Grosjean will be looking to climb the driver standings when he takes part in next weekend's Chinese Grand Prix, but first he had a big wall to scale, as his recent post on Twitter shows...

Jaguar Land Rover have until July to negotiate a deal to purchase the Silverstone circuit after being handed the right to exclusive negotiations. (Planet F1)

Sauber are reportedly behind with full salary payments to their 300 staff in Switzerland. (AutoWeek)

Racing director Eric Boullier says there is "no pressure" on McLaren to confirm their 2017 line-up, despite interest from rivals in Belgian reserve driver Stoffel Vandoorne, 24. (Planet F1)

Ferrari have been cleared of any wrongdoing by the FIA over a pit board message used during the season-opening Australian Grand Prix. (Fox Sports)

Sebastian Vettel is set to use his second power unit of the 2016 Formula 1 season in next weekend's Chinese Grand Prix following his Ferrari's failure in Bahrain. (Autosport)

Lewis Hamilton is not a fan of driver and mind coaches in Formula 1 and aired his views on the subject in a new video about how to be a world champion. (Daily Mail)

Ferrari will receive more money than any of their rivals for the 2015 season, despite finishing a distant second in the constructors' championship. (Autosport)

Renault is considering extending their involvement with engine specialists Ilmor to make it a long-term partnership as they try to catch up with the leading teams in F1. (ESPN)

Williams driver Valtteri Bottas says he could have avoided his turn one collision with Lewis Hamilton at the Bahrain GP had he braked earlier. (Motorsport.com)

Stoffel Vandoorne's championship point on his F1 debut for McLaren has advanced the 24-year-old's quest for a full-time seat next season. (New Zealand Herald)

Toto Wolff says F1 is now 90% about politics, which is overshadowing the battle brewing between his Mercedes team and rivals Ferrari. (ESPN)

Haas have set their sights on scoring points at every F1 race from now on after Romain Grosjean, 29, finished fifth in Bahrain. (motorsport.com)

Mercedes team principal Toto Wolff has admitted the clutch problems Lewis Hamilton, 31, experienced in Bahrain may not be solved in time for the next round in China.(Mail)

F1's new tyre contract with Pirelli from 2017 has yet to be signed off with the sport's governing body, despite being agreed in October, as the Italian firm wants specific targets and testing guarantees written in.(Reuters)

Mercedes boss Toto Wolff says it is "too early" to determine whether Nico Rosberg, 30, holds the upper hand over Lewis Hamilton in this year's Formula 1 World Championship race. (Daily Mail)

The Brackley-based team are open to reigning world champion Hamilton, 31, trying out a MotoGP bike. (Gazetta dello Sport via Inautonews)

Azerbaijan says fighting with separatists from the region of Nagorno-Karabakh will not threaten its first-ever F1 race in June. (ABC News)

Romain Grosjean, 29, said he was living "the American dream" after a fifth-placed finish for Haas in Sunday's Bahrain Grand Prix. (Fox Sports)

World champion Lewis Hamilton has defied Ecclestone's directive on the use of social media by posting a video of footage from the paddock. (Daily Mirror)

Max Verstappen has apologised to Toro Rosso staff for his angry radio exchanges with the team the during the Australian Grand Prix. (Autosport)

Four-time world champion Sebastian Vettel says Formula 1's new qualifying format is "the exact opposite" of what fans want, and that the sport's administrators would struggle to sell ice-cream correctly. (Daily Mail)

Las Vegas could host a second US race on the Formula 1 calendar in a few years' time but a deal has yet to be agreed, says the sport's boss Bernie Ecclestone. (Reuters)

Mercedes' Nico Rosberg says he can be Formula 1's version of Leicester City, the Premier League outsiders who are on course for a shock title.(Sky Sports)

Jenson Button expects Stoffel Vandoorne to be a quick learner when the Belgian makes his Formula 1 race debut for McLaren in Bahrain this weekend after Fernando Alonso was ruled out on medical grounds. (Reuters)

An excited Stoffel Vandoorne ‏writes on Twitter: "About to board for Bahrain, a bit earlier than expected but so much looking forward to it. Will do my very best for the team."

Romain Grosjean, who came a surprise sixth in Melbourne, believes Haas will continue to shock the rest of Formula 1, and says there has been "jealousy" from other teams. (Formula 1.com)

Kevin Magnussen is confident that Renault can score their first points of the season in this weekend's Bahrain Grand Prix. (NBC Sports)

Carlos Sainz stands his ground over his dispute with Max Verstappen, saying his Toro Rosso team-mate's radio outbursts in Australia were not necessary. (Crash)

Lewis Hamilton is confident he has the pace to beat Nico Rosberg at this weekend's Bahrain Grand Prix.(ESPN)

'The much-hated qualifying farce remains, the drivers are in open revolt against Bernie Ecclestone, and the teams are furious at the end of British terrestrial coverage from 2019' - Telegraph Sport asks why F1 is in such turmoil before the Bahrain GP. (Daily Telegraph)

Manor are confident the team have the resources to start moving up the Formula 1 grid. (Autosport)

McLaren driver Fernando Alonso, 34, could be forced to miss the Bahrain Grand Prix as a precaution after his crash in Australia. (Sun)

Three-time world champion Lewis Hamilton has been preparing for this weekend's race with a spot of skydiving - on an indoor simulator. (Daily Mail)

Teams face delays in designing their 2017 cars because the lack of a contract between the FIA and Pirelli means much-needed wind tunnel tyres have not been released. (Motorsport.com)

Renault F1 managing director Cyril Abiteboul would like to see the current fuel limit rules removed because he says they are making Formula 1 more like endurance events than flat-out racing. (F1i.com)

Mercedes team boss Toto Wolff has criticised the decision to keep the highly controversial 'musical chairs' qualifying format - in which the slowest car is eliminated every 90 seconds - in place for Bahrain, describing the innovation as "rubbish". (Inautonews)

Jenson Button has been showing off his new #22 McLaren team kit for 2016 on Instagram.

Christian Horner says Red Bull's pace at the start of the season has given him belief that his team can catch Ferrari later in the year. (F1i.com)

Red Bull boss Christian Horner is confident his team can overhaul Ferrari as Mercedes' major challengers as the season goes on, after Daniel Ricciardo's fourth place in the Australian Grand Prix. (F1i.com)

Renault's Jolyon Palmer is looking forward to Sunday's Bahrain Grand Prix at Sakhir, a track on which he has already won. (Formula1.com)

Sauber driver Felipe Nasr predicts an ongoing struggle for his team after he finished 15th in the Australian Grand Prix. (Autosport)