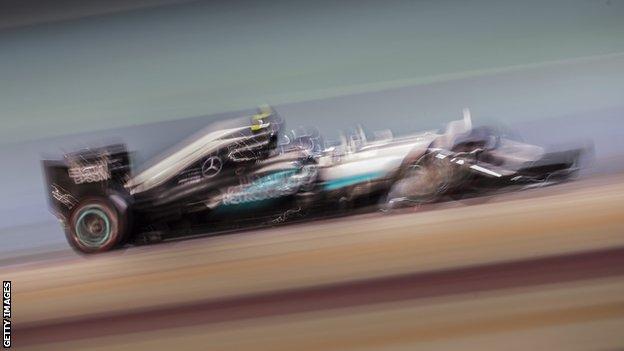 This Formula 1 season is revealing its secrets slowly - but there is enough evidence after the first two races that a tight battle is brewing for the world championship.

Nico Rosberg is in a strong position after wins in both of the first two grands prix in Australia and Bahrain, thanks to Mercedes team-mate Lewis Hamilton managing to convert both his pole positions into bad getaways that extinguished his victory hopes within seconds of the start of each race.

And Ferrari, despite two difficult events, have suggested they will at the very least be able to keep Mercedes on their toes.

In many ways, from a neutral's point of view, Rosberg getting a jump on Hamilton at the start of the season is exactly what F1 needed.

It was Hamilton's problems at the start of the 2014 season that gave that year its jeopardy, forcing the fastest driver to have to close a gap, whereas his flying start to last year rendered the narrative all too predictable.

Whether being behind in 2016 will lead to the same psychological wobbles in Hamilton as it did two years ago remains to be seen, although his sang-froid in the face of his difficult results in Melbourne and Sakhir suggests he is in a better place this time around.

He certainly talked a good game after Bahrain, where pole position became seventh with a damaged car by the end of the first lap after an ambitious dive by Williams's Valtteri Bottas up the inside at the first corner led to the two cars colliding.

"This is a psychological game," Hamilton said, "but I guess with age and experience I am in the most solid place I have been psychologically."

He "wasn't worried", he said, about either his two slow starts or the results. The problem, he said, would soon be fixed. As for his 17-point deficit to Rosberg: "It's a long season."

With only two of the 21 races down, Hamilton has good reason to stay calm.

He proved in 2014 he was more than capable of hunting down Rosberg from a deficit far bigger than this. In fact, he did it three times.

Equally, the battle between the two Mercedes drivers is quickly falling into a familiar pattern. Hamilton has been the quicker - by a considerable amount in Australia, by a tiny margin in Bahrain, one of Rosberg's best circuits - but Rosberg is there to pick up the pieces if anything goes wrong.

The exact size of the threat posed to Mercedes by their closest rivals is not yet completely clear because of the circumstances of the first two races.

Sebastian Vettel was leading in Australia, with the race his to lose, only for Ferrari to do exactly that with an ill-considered strategy call.

In Bahrain, the Italian team looked very much a match for Mercedes at times during the weekend - they were mixing it with Hamilton and Rosberg for much of qualifying, only for the silver cars to suddenly pull out a half-second margin on their final runs.

Neither Ferrari nor Mercedes were quite sure why that happened. Hamilton said Mercedes had not changed any settings on their car or engine, and that he suspected the dropping track temperatures in the deepening night might explain it.

The race, too, provided few definitive answers. Rosberg was 11.8 seconds ahead of Kimi Raikkonen by the time the Finn had cleared the cars that had passed him after he, like Hamilton, made a poor start. That gap had gone out to more than 14 seconds by the time the Ferrari made its first pit stop.

But by the time the third and final pit stops were over, Raikkonen and Ferrari had reduced that margin to less than four seconds.

On the face of it, that suggests Ferrari had a pace advantage in the race, but it's not as simple as that.

For one thing, as Mercedes F1 boss Toto Wolff pointed out, Raikkonen stopped before Rosberg at each of their three stops - and the "undercut" as this is called, gives a powerful advantage in Bahrain, of as much as two or three seconds each time. So that's six to nine seconds Rosberg lost right there, in addition to perhaps a couple or so more courtesy of three slow-ish pit stops.

At the same time, Rosberg had the race in his lap as soon as Hamilton and Raikkonen found themselves delayed at the start and never had to extend himself. As Hamilton put it: "I guarantee you Nico was not pushing after about 10 laps."

There is also the question of how much quicker Vettel might have been than Raikkonen had he not suffered an engine failure on the formation lap.

This might be an unfair question - after all, Raikkonen was actually quicker in Bahrain than Vettel last year, one of the very few races where he was. But it was also a point raised by Ferrari team boss Maurizio Arrivabene after the race, in almost the same breath as praising Raikkonen's race as "absolutely spectacular".

Rosberg is talking up the Ferrari challenge, saying: "We need to keep pushing. They haven't shown what they are are able to do yet.

"They have had so many mishaps that have cost them dearly. So we have not seen the real Ferrari yet. So we need to be careful and they are coming at us strong."

But it's a bit too early to be that sure yet and Ferrari being capable of winning the title this year remains "a big if", as their former driver Fernando Alonso put it in Australia.

Meanwhile, Ferrari clearly have a reliability problem as well as a question mark over their ultimate pace.

Raikkonen suffered a turbo failure in Australia, and Vettel a catastrophic explosion of his internal combustion engine in Bahrain.

Both said at times over the weekend in the desert that they were "not worried" about Ferrari's reliability.

But Mercedes have strong suspicions that Ferrari are using their peak power modes sparingly as a result of an inherent fragility in their engine and Bahrain provided strong evidence that they are right.

Before the next race in China provides further insight into the state of play between Mercedes and Ferrari, F1 has to sort out what is rapidly becoming an embarrassing cock-up over its qualifying format.

When this season's new elimination system proved a failure in Australia, teams agreed to revert to the 2015 method, only for this to be torpedoed by FIA president Jean Todt, who did not give them that option to vote on.

After the elimination system failed again in Bahrain, the teams met with Todt and Ecclestone on race morning in an attempt to come up with a suitable alternative. And that's where it starts to get weird.

On Saturday evening, after long periods of time with an empty track, Mercedes F1 boss Toto Wolff said: "If somebody puts a block in the system to get us stuck then we should publicly crucify him in the paddock."

It was said in jest, but the central point was clear - it would be ridiculous not to go back now.

But that is exactly what happened.

The teams were again unanimous in their desire to go back to the 2015 knockout format.

But Ecclestone - who started all this off with a demand to change qualifying on the eve of the season - expressed his vociferous support for the new system, telling those in the meeting that he "loved" what he had seen on Saturday.

To say the teams were somewhat perplexed by this would be to understate their feelings in the extreme - there was a number of exasperated team bosses looking bemused in the paddock before the race and privately making their feelings clear, including to this writer.

Very few people understand the resistance Todt and Ecclestone are showing to reverting to the 2015 format, unless it is an attempt to save face and avoid what would after all be an embarrassing U-turn and admission of failure.

The result is that a compromise solution is now being championed by Todt - to have the three knockout sessions in the format of 2015, but tweak it by making qualifying positions dependent on a driver's two fastest laps rather than one.

Given that Ecclestone's original intention in changing qualifying was to find a way to mix up the grids, this is a somewhat perplexing solution, as statistically speaking by averaging out two laps the element of randomness is being reduced.

But one senior figure pointed out that it did increase chances of a mistake affecting a driver's position - because he now has two laps counting rather than one, a mistake on either will put him out of position.

Unfortunately, it turns out that the new proposal is yet another example of the ad hoc decision-making that got F1 into this position in the first place.

It was just an idea FIA F1 director Charlie Whiting proposed during the weekend in Bahrain after being asked to come up with some thoughts; it wasn't intended to be THE idea.

But Todt and Ecclestone loved it and now it is going forward for analysis by the teams, who are between a rock and a hard place.

They don't particularly want it - what they want is to go back to 2015 - but the choice with which they will be presented will be between this new idea and sticking with the failed elimination format.

After the race, Wolff described this situation as "a political mess" and "madness". It was a rare moment of sanity in the whole sorry process.