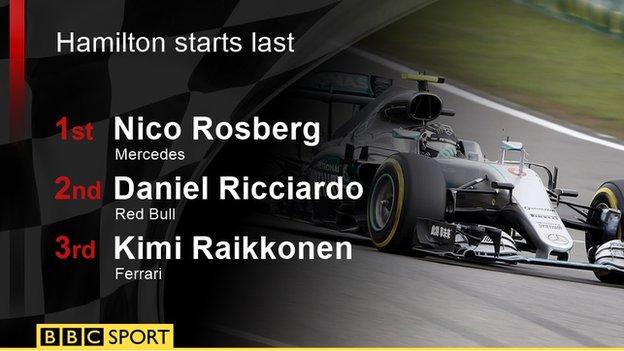 A power-unit problem for Hamilton meant his difficult start to the season continues and his 17-point deficit to Rosberg could grow further on Sunday.

Both Kimi Raikkonen and Sebastian Vettel made errors on their final lap and could manage only third and fourth.

Despite qualifying taking place on a near dry track following heavy rain, warm and dry conditions are expected for Sunday's race, where more than 125,000 fans are expected.

The race is live on the BBC Sport website and 5 live.

What happened to Hamilton?

The world champion, who had not done any laps in the wet final practice session earlier in the day, hit trouble as soon as qualifying started.

Hamilton said the engine felt down on power as he went out for his first lap and was called back in. Mercedes worked on the car and sent him out again but could not solve the problem.

He said: "No-one wants it easy. It's still early on. We are definitely in the mud but we will dig our way out.

"These things are sent to try us. I'm sure the guys are just as gutted as I am.

"You can overtake here. The tyres do not last too well but of course I will give it everything I've got. Hopefully they'll get the issue fixed and I'll have a race."

Clever Rosberg learns from his mistakes

Raikkonen had been fastest after the first runs in the final session, on which Rosberg braked too late and went too deep into the hairpin at the end of the long straight.

But Rosberg moved into another sphere on his final run with a lap half a second clear of the field.

Vettel chose to do only one run in the top 10 shoot-out and the decision backfired on him as he made the same mistake as Rosberg had done - and Raikkonen also repeated.

Raikkonen was pipped by Ricciardo by 0.055secs, with Vettel a further 0.274secs adrift.

Ricciardo's stellar performance was underlined by the fact that he was more than 0.4secs clear of team-mate Daniil Kvyat, who was sixth behind Williams driver Valtteri Bottas.

Rosberg and Mercedes also played a clever strategic game to give themselves a potentially significant advantage in the race.

The German made it through the second session using only the soft tyre - which means he can use it to start the race. It is slightly slower than the super-soft the other leading runners will have to start on, but significantly better over a series of laps.

That raises the possibility of Rosberg simply destroying the field on his way to what would be a third consecutive win this year and sixth in a row going back to the Mexican race last October.

Rosberg said: "I'm not ecstatic because obviously Lewis had bad luck and the fight didn't happen, but obviously I'm pleased. It has been a good weekend."

Raikkonen said: "It's a shame. We had a chance to be even on the top today but we try to make the best of it in the race."

Vettel added: "We decided to save a set of tyres. I was confident I could make it in the last lap but I didn't. I wasn't happy with the lap. I made a couple of mistakes.

"Nico is starting on a different compound and we will see how the race unfolds.

"P2 was there but I had a bad lap at the end. In all honesty Nico's lap was very strong in the end."

McLaren caught out, but at least not by their own engine

McLaren felt they had a good shot of getting into the final qualifying session for the first time since the start of their engine partnership with Honda last year but fate intervened.

Neither Fernando Alonso nor Jenson Button had completed a run on new tyres in second qualifying when the red flag was thrown because a wheel came off Nico Hulkenberg's Force India - an incident which subsequently earned the German a three-place grid penalty.

Alonso groaned in frustration when he was told by his engineer that he did not have time to do another lap and he and Button ended up 12th and 13th.

"Massively frustrated," Alonso said. "The car has the potential to be in Q3 and we didn't see the new tyres or the full engine power.

"We were saving them until that moment, just waiting for that lap and we didn't even open the lap.

"On the positive side, we were aiming to pass Q1 a few races ago and now are are disappointed not to be in Q3 and we have free choice of tyres. Points are the target, that's for sure."

"A little bit unlucky once again," Button said. "One day we will show our true pace."

Their positions, however, do at least give them free choice of tyre strategy for the start of the race.

At the back of the grid there was a highly impressive performance from Renault's Kevin Magnussen.

The Dane had had almost no dry running going into qualifying after a suspension failure in first practice on Friday forced him to miss the second session.

But Magnussen out-qualified team-mate Jolyon Palmer, who had a much smoother weekend, by 0.9secs.