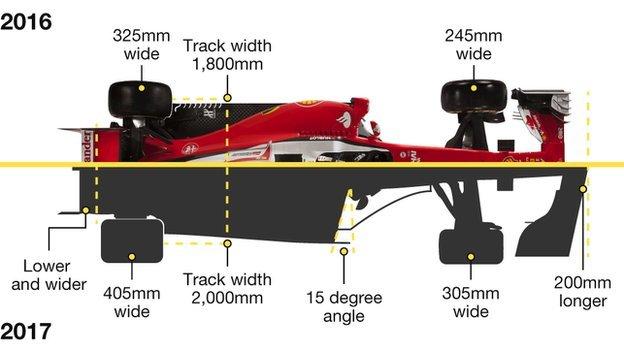 Formula 1 has been through a turbulent time over the last year or so.

There have been rows, stand-offs and threats. At times, the very future of the sport has seemed in doubt.

Falling TV audiences and a poisonous atmosphere within the sport have led to the acceptance that something has to change.

And now, finally, F1's bosses are poised to sign off on a set of new regulations that they hope will guarantee a rosier future for the next few years, with faster cars, happier drivers, better racing and less financial strain on smaller teams.

The disputes have been about all aspects of the car - chassis, engine and tyres. And they became - and remain - very political.

But with the end-of-April deadline for completion looming, a resolution is in sight.

The turbo hybrid V6 'power-units' introduced into F1 in 2014 are masterpieces of technology that have produced a revolutionary step forward in the performance of the internal combustion engine.

If that sounds like hyperbole, consider this: until 2013, F1 engines - and pretty much every other petrol engine - had converted fuel-energy into performance at about 29% efficiency.

After just over two years of racing in F1, the new turbo hybrids are close to 50% efficiency - and over it when the energy recovery system is on full deployment. The progress is breathtaking - and the technology will soon filter into road cars, with obvious benefits.

But not everyone is a fan - most notably F1 boss Bernie Ecclestone.

The 85-year-old feels the hybrids are too expensive, unnecessarily complex for F1 and sound bad. It didn't help that having demonstrably the best engine led to Mercedes domination.

Last autumn, Ecclestone even threatened to introduce a cheap alternative engine into F1, to run alongside the hybrids under an equivalency formula. There were no prizes for guessing how that formula would be skewed.

This stand-off led to the manufacturers agreeing with governing body the FIA in December on four targets: cheaper engines, guaranteed supply, performance convergence and better noise.

Over the Chinese Grand Prix last weekend, Red Bull team boss Christian Horner said the manufacturers were "nowhere near" achieving this - and that as a result the alternative engine idea was back on the table.

BBC Sport can reveal that an agreement over engines has basically been reached. While details are still subject to tweaking, it is as follows:

As a parenthesis on the final point, it is actually not possible for Red Bull to find itself without an engine. Mercedes will never supply them and Ferrari are unlikely to. But Renault's new contract with F1, signed when it committed to buying the Lotus team last autumn, commits the French manufacturer to supplying another team if requested.

The caveat to the agreement is that it all needs to be agreed at the various legislative processes in meetings at the end of the month - starting with the strategy group on 26 April. But the signs are promising.

Hybrid engines are here to stay

The manufacturers are resolute in their support for the hybrid engine concept, a point made by Ferrari president Sergio Marchionne over the Chinese Grand Prix weekend.

"We need to be careful about not turning this into something it shouldn't be," Marchionne said. "This is supposed to be the leading edge of the automotive industry and it needs to reflect the development of the wider industry.

"I am happy with the way in which the powertrain has developed. It doesn't meet everyone's objectives - Red Bull has got a different view - but we are of the view that we need to continue in this fashion and it's a view that's shared by the other engine manufacturers."

Ferrari have a right of veto over any rule change it deems to be contrary to its interests. So that's almost certainly that.

Over the winter, the undercurrent of dissatisfaction with the performance characteristics of Pirelli's F1 tyres turned into action.

Key stakeholders - including drivers - made it clear they felt that tyres on which drivers could not push hard for more than a couple of laps before they overheated and irretrievably lost performance were not appropriate for F1.

Pirelli, in a meeting with the FIA, team bosses and seven drivers at its headquarters in Milan in early February, said it could do whatever F1 wanted, but could they please define this formally.

Following protracted negotiations, what Pirelli refers to as a 'target letter' has now been sent by the FIA. BBC Sport can reveal its key points are as follows:

The FIA feels that these requirements will guarantee Pirelli has to produce a product more like what would be considered a normal racing tyre - one on which the requirement for management by driving under the limit to control thermal degradation is greatly reduced, and drivers can therefore push hard throughout a race.

Originally, teams and the FIA had also wanted Pirelli to guarantee that minimum tyre pressures be set at a point much closer to the optimum performance level of the tyre.

This is in response to complaints that pressures have been too high since Pirelli raised them on safety grounds following the high-speed blow-outs suffered by Nico Rosberg and Sebastian Vettel at last year's Belgian Grand Prix.

But the FIA has accepted that this is a difficult task for a tyre manufacturer - it was a point Michelin also made when it was in the running to be F1's supplier - so this requirement is not in the target letter.

The strategy group of leading teams more than a year ago set engineers the target of coming up with a set of rules that made the cars five to six seconds a lap quicker, more dramatic looking and did not negatively affect overtaking.

It has been a convoluted process - complicated by Pirelli's concerns about the loads created by these much faster cars.

But over the winter a compromise set of rules was agreed that would reduce lap times by about three to four seconds.

The key aspects are:

Mercedes have had misgivings about this process since the start. Last November, the world champions wrote a position paper pointing out their concerns.

It said that cars were already at or approaching historic highs in terms of both downforce and power and questioned the wisdom of speeding them up at a time when there were already concerns about whether the tyres could physically cope.

This argument was rejected by rivals, many of whom felt Mercedes were trying to protect a competitive advantage.

Over the weekend in China, Mercedes F1 boss Toto Wolff again voiced his concerns, saying cars should be left as they are.

"The longer you keep regulations stable the more the performance is going to converge between everybody," Wolff said. "And this is exactly what is happening now.

Change the rules again, Wolff said, and the inevitable consequence will be a divergence of chassis performance.

And he adds: "There will be more downforce which you won't see, just on pure lap time, and less overtaking because the wake is much more extreme."

But FIA F1 director Charlie Whiting has attempted to allay concerns that it will be harder for drivers to race closely with the 2017 cars.

"One of the things we have been talking about all along is the fact that we must not make it more difficult to follow another car, and that has been one of the underlying principles," Whiting says.

"So, we've done I believe the best we can, given we have to take everyone's views into account."

Several teams made it clear to Whiting in China that they had no appetite for a U-turn that would lead to abandoning the new rules - and Mercedes has no desire to undertake what would be the huge effort needed to try to make that happen.

That means it is "extremely doubtful", as one senior figure put it, that the plan for faster cars will be derailed.

So F1 will be entering a brave new world next year. And everyone involved is hoping it will be better than this one.