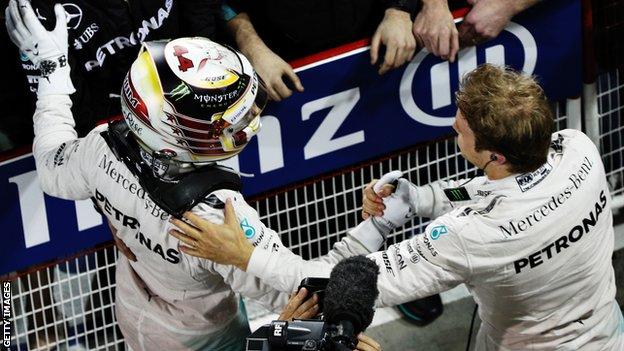 Lewis Hamilton's difficult start to the season has set the 2016 World Championship up beautifully.

Hamilton is 39 points behind Mercedes team-mate Nico Rosberg, who has won all three races after problems for the world champion in all of them.

With 18 races to go, that is by no means an insurmountable challenge - but it is the effect it will have on the protagonists that makes the season so interesting now.

How Hamilton v Rosberg could play out

It is crucial that the Briton does not become frustrated and let the problems he has had get to him.

The key thing for him is to do what he does best - which is to qualify well and race from the front.

Hamilton's problem is that, even if he starts winning, if Rosberg just keeps picking up second places and the odd win when Hamilton has problems, it is going to take a long time to catch him up.

That gives the German something to play on - and he may well want to emphasise that comfort zone whenever he can.

But some statistics help keep things in perspective:

However, Rosberg is stronger and more comfortable than he has ever been before. He has six wins in a row now, dating back to last year's Mexican Grand Prix.

If he wins in Russia this weekend, he will be joint-second in the all-time list of consecutive victories with Alberto Ascari and Michael Schumacher, and he has a confidence and a feel about him that suggests he is in a good place right now.

Rosberg has a momentum that can take him on for another few races and I never liked allowing my team-mates that advantage.

Hamilton will come back I'm sure - but I reckon it will be harder for him than it was in 2014.

Could Red Bull and Ferrari get involved?

Another concern for Hamilton is that the competition faced by Mercedes is far stiffer than it has been for the past two years.

That can play in Hamilton's favour - if he wins and a Ferrari or a Red Bull can get in between him and Rosberg, he will close the gap faster. But of course it can work the other way round as well.

Mercedes say that they face a genuine threat from Ferrari - that the Italian team are every bit as quick as them but have just had three messy races. I'm sceptical about that claim; I think there is a bit of game going on.

Ferrari are closer this year than they were last, there is no doubt about that. But equally there is no question that the Mercedes is the best car - not only the fastest but also the most consistent. Mercedes have got that little bit in hand that makes all the difference - and that makes it hard to tell exactly how much faster than anyone else they are.

Yes, it has looked close from time to time over the weekends this year. But when it matters, bang, Mercedes have turned up the wick and put the car on the front row.

It looks to me as if they still have a 0.4-0.5 seconds advantage over everyone else and I suspect that if Ferrari do get to where Mercedes are, then Mercedes have the potential to take another step forward.

I believe Mercedes are talking up their rivals for two reasons: to take attention away from the fact that they are dominating again, even if not by as much as before; and to keep everyone in their team focused, so no-one sits back and relaxes and takes things for granted.

I've said it before, but to have a chance, Ferrari have got to qualify on the front row with the Mercedes and give themselves the potential to get among them.

When they do that, Mercedes are vulnerable. But it is easier said than done.

Ferrari will start to feel the pressure

Everything was rosy at Ferrari last year following Sebastian Vettel's arrival and a big step forward in performance from a traumatic 2014.

As ever, you get a one-season honeymoon period, which is over now. The time since Ferrari last won a world title just keeps on getting longer and nothing puts the pressure on more than the big boss turning up, as president Sergio Marchionne did in China.

He made it clear it is imperative the team start winning. Marchionne is a businessman with a very hard edge to him and he needs to see a return on his investment.

There is no fear of Ferrari having the carpet pulled from underneath them. Nevertheless, Marchionne's presence in China, a huge market for their car sales, was a very clear statement - so it was a tad embarrassing, after showing good pace in qualifying, for the two drivers to crash into each other.

Vettel was very critical of Red Bull's Daniil Kvyat following that incident at the first corner in Shanghai but for me it was clearly Vettel's fault.

He did not see Kvyat coming until it was too late. The door was open - there was easily a car's width between the kerb and the Ferrari.

Kvyat was under a bit of pressure himself after two poor races in Australia and Bahrain, and being comprehensively out-qualified by team-mate Daniel Ricciardo in China too. He needed to start delivering. He stuck his nose in, was completely alongside, and Vettel sort of got caught between a rock and a hard place, with team-mate Kimi Raikkonen coming back towards the line after running wide earlier in the corner.

Kvyat was quite right to defend himself from Vettel's criticisms, which I suspect were founded in frustration at having the chance to challenge Mercedes taken away, and embarrassment at crashing into his team-mate in front of the Ferrari president.

Ferrari used more engine development 'tokens' than anyone over the winter - 23, leaving only nine for the rest of the season. They are also reputedly considering bringing an engine upgrade to Russia, which with their engine failures in Australia for Raikkonen and Bahrain for Vettel was not expected.

It is possibly a consequence of their realisation that they need to get some traction against Mercedes.

Red Bull are also looking threatening. The chassis looks good, the drivers are sniffing around the podium, and there is a big Renault engine upgrade due in Canada in June.

We will then see whether Mercedes' claims that the competition are close are true, or whether they then make another step forward. Which I suspect they will.

Williams looking to the future

Progress from Ferrari and Red Bull means Williams are slipping back. We saw in the first races of the season that their race pace is not where it needs to be, meaning their chances of finishing third in the championship for the third consecutive year already look slim.

In the circumstances, this is not that surprising. Williams have limited resources compared with the top teams and they have to marshal them carefully.

They have to balance their efforts on the new regulations for 2017, which is a big technical change and a huge investment of manpower and finances, with their energies for this season and car development.

In their situation, focusing more on 2017 is a good plan, because an advantage at the beginning of a new set of regulations can pay dividends for two or three years. Any progress this year will only last for one.

Still a need for 2017 rule changes

Off track, Mercedes have reiterated their view that F1 is making a mistake in speeding the cars up for 2017 with new rules.

But the reasons why F1 bosses decided upon a wholesale change - which Mercedes initially backed - still apply. The argument for the rule changes was that the drivers needed to be challenged more and the cars needed to be faster and sexier, and back closer to the historic lap-time high of 2004-05.

Back then, drivers were in awe of the cars - and would be tested to their physical limits every time they drove them. That is not the case now.

Mercedes have pointed out that qualifying times this year are now back at 2004-05 levels. Well, that is partly true. In Bahrain, pole was the fastest ever, and in Australia it was just 0.3 seconds off.

But it was not in China - there, pole was still three seconds off the fastest ever.

That was because Shanghai is the circuit on which power has the smallest effect on lap timeout of the first four races. The 2016 cars are making up much of their lap time on those of 10 years ago on the straights - where they are much faster. That is an impressive fact in itself. But they remain a lot slower in the corners.

And in the races the situation is even starker because of the need to manage the Pirelli tyres to such a large extent.

Comparing this year's race fastest laps to the fastest ever looks like this:

In other words, the reasons to change the rules and make the cars faster - so the drivers and fans are in awe of F1 again - remain as relevant as ever.