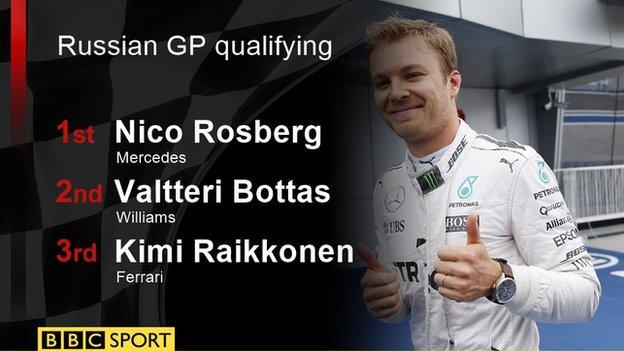 Lewis Hamilton suffered a major blow as an engine problem left him 10th on the grid at the Russian Grand Prix.

Hamilton's Mercedes suffered the same hybrid system failure as at the Chinese GP, which he started from last.

Ferrari's Sebastian Vettel was second but has a five-place grid penalty, putting Williams' Valtteri Bottas on the front row.

Sunday's race is live on Radio 5 live Sports Extra and the BBC Sport website at 13:00 BST.

'Never give up' after nightmare season start

A downcast Hamilton said after qualifying: "Obviously not a great feeling, but I will try to recover what I can from wherever I start."

He was also given a reprimand following an investigation by the stewards for not rejoining the track in the correct manner after running wide at Turn Two in the first qualifying session.

And he could face a further grid drop depending on the detail of what the team has to change before the race. Mercedes said they would not be able to say what they were doing - and its consequences - until Sunday morning.

Hamilton's problem is the latest in a series that have afflicted him this year as Rosberg has won the first three races.

Two poor starts left him second and third in the Australian and Bahrain grands prix. He then finished seventh in the last race in China after his power-unit problem, which was with the MGU-H which recovers energy from the turbocharger.

That rendered a five-place grid penalty for an unauthorised gearbox change in Shanghai academic.

Mercedes team boss Toto Wolff said: "It seems to be the same fault as in Shanghai, even though we changed all the parts, so we need to analyse that properly and especially what we can do for tomorrow.

"There is no explanation. It is a mechanical sport and sometimes you run into these really awful series and this is happening to Lewis at the moment.

"We are trying to push performance and if you push the boundaries you will reach a limit. We seem to be missing a bit in there and it is a very complex technology and we need to find out how we can avoid these things in future."

Rosberg looks to have a clear path to victory because Mercedes have demonstrated crushing superiority so far at the Sochi track on the Black Sea coast.

The German was a massive 0.706 seconds faster than Vettel, whose Ferrari team have slipped back this weekend after showing flashes of pace in the previous races but not delivering on them because of problems.

Rosberg's margin could have been even bigger - he was 0.842secs after the first laps but then did not complete his second run.

"I was just focused on myself and really going for it and feeling great from Q2 onwards," said Rosberg. "Of course the others have been unfortunate and that makes my race a little easier tomorrow but an F1 race is never easy.

"The opposition are still there and still need to stay focused and do the job as well as possible."

Vettel was second, but will start seventh as a result of his penalty, while his team-mate Kimi Raikkonen had a disappointing session, ending up 0.127secs slower than Bottas, who Vettel beat by 0.413secs.

Williams' Felipe Massa was fifth fastest, but will start fourth, ahead of Daniel Ricciardo of Red Bull and Force India's Sergio Perez, who will be the final driver ahead of Vettel on the grid.

Red Bull's Daniil Kvyat was 0.334secs behind team-mate Ricciardo and just ahead of Toro Rosso's Max Verstappen, who is already the subject of speculation that he will take the Russian's seat in 2017.

Jenson Button was 12th for McLaren, the team again failing on their ambition to make it into the final qualifying session.

Button's consolation was that he was two places and 0.106secs ahead of team-mate Fernando Alonso, the first time the 2009 world champion has out-qualified a McLaren colleague this season.

The third Briton, Jolyon Palmer, was 18th, but encouraged to be only 0.095secs behind team-mate Kevin Magnussen and feeling that his Renault team had found a problem with the handling of the car that had troubled him since the previous race in China.