When I was coming up through the ranks, my dad always used to say: "You're only as good as your last race."

He said it to remind me that you should never rest on your laurels. In the wake of Red Bull's decision to swap Daniil Kvyat and Max Verstappen after just four races this season, it looks like he had a point.

Actually, though, it's pretty clear this is about more than the mistakes Kvyat made on the first lap of the Russian Grand Prix last weekend.

Red Bull's driver programme is all about finding the next multiple world champion, the next Sebastian Vettel. They have been ruthless from the very beginning.

It doesn't matter whether it's mid-season or end-of-season, during a contract or at the end of one, if they do not feel someone is in that elite group, they look at another option.

What happened to Kvyat?

Whatever your view of this decision, you have to say that Red Bull give young drivers opportunities.

They plucked Kvyat out of GP3 and stuck him straight into F1 in 2014 because they believed he was the next most promising young driver in their programme.

I first saw the Russian in European Formula Three in 2013. He was quick and looked good but did not particularly stand out or dominate weekends like others have.

But when he was promoted to Toro Rosso the following year, he did a really good job alongside Jean-Eric Vergne.

When Sebastian Vettel told Red Bull on the Friday before the 2014 Japanese Grand Prix that he was going to Ferrari, they made an instantaneous decision to promote Kvyat to replace him - even though Fernando Alonso was potentially available.

No questions, no deliberations. It was just, "right, there's an opportunity, this is your chance, prove to us whether you've got it".

Part of Red Bull's modus operandi has been to give people the chance, in sometimes difficult circumstances, to see how they cope.

Kvyat had a slow start last season but ultimately outscored team-mate Daniel Ricciardo. He did not out-pace him, though.

He did seem to be beginning to sort himself out a bit in the last couple of races this year but the Russian seems to need a little bit of time to get into things - and that is something you don't get at Red Bull.

Kvyat has been criticised from various directions for two first-corner incidents in the last two races. In the last column, I explained why I thought he did nothing wrong in China, despite Vettel's criticisms.

In Russia, Kvyat was definitely at fault. He was a bit late on the brakes into Turn Two and hit Vettel up the back. It was a bit silly. And in the second incident at Turn Three he was, up to a point, a victim of circumstances. It was sort of wrong place, wrong time.

The problem was it was Vettel again. Had it been someone in the mid-grid and not a potential winner this season, there would not have been such an outcry.

Can Kvyat recover from this? 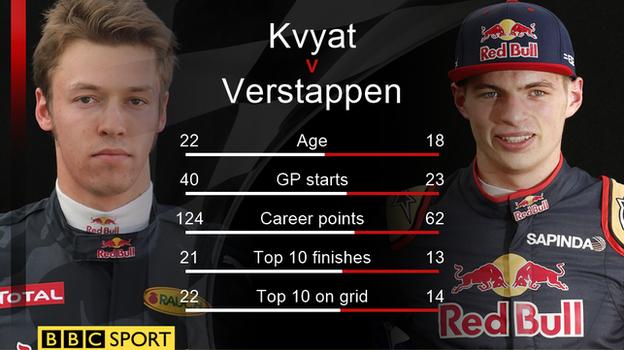 Red Bull have said that they hope Kvyat can "regain his form" by moving back to Toro Rosso, but I don't believe this is about trying to rebuild his confidence because it will be such a blow for him.

The chances are he will not be at either Red Bull team next year, never mind regain his position in the main team.

They have another young driver knocking on the door in Frenchman Pierre Gasly, and I would expect him to be promoted to Toro Rosso next year in place of Kvyat.

To save his F1 career, Kvyat has to make a great comeback. Not every race can be great when you're a driver, but it is the guys who have the ability to turn that around again who have the staying power.

On the track, there is a fine line between hero and zero. Kvyat caused a first-corner melee when he hit Vettel in Russia. Not far behind, Alonso used this to help him score McLaren's best result of the season.

He stayed on the outside to avoid the chaos, ran through the run-off area perfectly legitimately and gained a lot of positions.

That was the foundation for his sixth place - the second-best result since McLaren and Honda began their new partnership, after Alonso's fifth place in Hungary last year.

These things happen when you are in the middle of the pack, and it is all too easy to get involved in incidents.

Equally, it's possible to stop it happening - look at Romain Grosjean. He was the "first-lap nutcase" in 2012, and he rightly was pilloried for a number of incidents, because he was in a downward spiral.

Yet he has emerged from that in recent years into an impressive performer, and has scored two fantastic results for the new Haas team this year, with sixth in Australia and fifth in Bahrain.

As an F1 driver, the stakes are high, and you don't always get a second chance. Kvyat has sort of got that - and he needs to make the most of it.

Were Red Bull looking for an excuse to do this?

Rightly, Red Bull have been keeping a very close eye on Verstappen's development. And they are not the only ones.

This is as good a time as any to make this move, as they now have the best part of a season to see how the 18-year-old stands up in the big time. He has done pretty much everything right so far, so why not give him a chance and see what happens? What are they risking?

At the same time, though, this shows Red Bull are under pressure.

For one thing, other teams are interested in Verstappen, and promoting him might stop him getting itchy feet if, say, Ferrari came calling.

For another, the team need to perform and improve after a very difficult 2015. It is not as if they are totally out of the woods in terms of the problems they had last year.

Yes, they are more competitive, and there is a promising engine upgrade coming from Renault for the Canadian Grand Prix in two races' time.

But they have no engine deal sorted for next year yet - even if a continuation of their agreement with Renault, and the power-units badged for a sponsor, is by far the most likely scenario.

Is promoting Verstappen the right move?

But people forget that he was actually out-qualified 10-9 by his Toro Rosso team-mate, Carlos Sainz.

They are both very promising, but Verstappen showed he has a very wide and good skill set and he has continued to develop this year. It is three-one to the Dutchman in qualifying after four races in 2016, although the average time difference between them is virtually nothing.

But within Red Bull, Verstappen has the momentum and you need to ride that wave when you are on it.

He was only signed by Red Bull in mid-2014 - and when they did so it was because they had decided to put him straight into F1 the following year.

At the time, the idea was to partner him with Kvyat at Toro Rosso, and it was only when Vettel left that a vacancy arose and Sainz was chosen to fill it.

They feel Verstappen is worth a chance, and I can't disagree with them. I don't always like the way they do things - it is harsh, cut-throat and brutal - but you have to keep coming back to my dad and his old sayings.

How will Verstappen cope with Ricciardo?

Red Bull's motorsport boss Helmut Marko, who makes these decisions, does not smile very much but I can imagine him smirking about the prospect of Verstappen v Ricciardo.

The Australian has emerged as a potential superstar in his own right in the last two years, completing overshadowing Vettel in 2014 and proving very fast and classy.

After a brilliant 2014, including three wins, he did not have the best of seasons last year. The car was not very good initially, and he did not adapt to it that well.

But once he got the car underneath him, he was rocking and rolling - and he has continued that at the start of this season.

There is a lot at stake. Who will come out on top? It's going to be fascinating to find out.