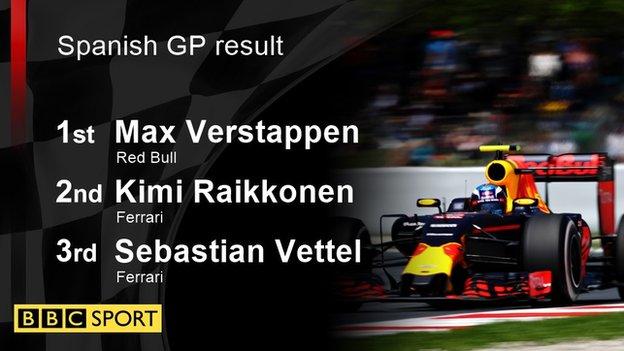 Hamilton and Rosberg came together on lap one as the world champion tried to pass his team-mate, leaving Red Bull and Ferrari to dispute the race.

He made his two-stop strategy work to seal a thrilling race near Barcelona.

Listen to Hamilton and Rosberg crash

Mercedes... what a mess

It was a stunning end to a remarkable race, which started with the unthinkable.

Hamilton, who had taken a superb pole position on Saturday, made a decent start but Rosberg's was very slightly better and the German was able to draft him down the straight and and pass around the outside into Turn One.

A determined Hamilton was much faster through the fast Turn Three, as a result of Rosberg being in the wrong engine mode, and was closing quickly.

Hamilton dived for the inside on the exit of the corner as Rosberg came right across the track to defend his position. Hamilton did not lift, went onto the grass and lost control, collecting Rosberg's car as he spun back on to the track and taking both out.

The race stewards looked into the incident after the race, but decided to take no further action.

However, the fallout will continue within the Mercedes team.

Mercedes non-executive chairman Niki Lauda called the incident "stupid" and blamed Hamilton for being "too aggressive".

"It is definitely not clear-cut so I wouldn't want to blame any of them at that stage.

"Lewis had much more speed, Nico closed the door, Lewis was too wide on the inside and lost the car. It is definitely not a 100% pro one and zero the other."

Whatever the rights and wrongs of the incident, the result of it plays into Rosberg's hands. He retains a 43-point lead over Hamilton but the Briton now has one fewer race - 16 - to close it down.

The son of ex-F1 driver Jos, Verstappen - only 18 - had Raikkonen within a second of him for the last 22 laps but did not put a wheel wrong to take his first win on his debut for Red Bull, following his promotion from junior team Toro Rosso before this race.

"To win in the first race is such an amazing feeling," Verstappen said. "My dad helped me a lot to achieve this, this is amazing."

But Ricciardo may feel hard done by after he led the first 28 laps of the race from Verstappen only for Red Bull to pull him in on lap 38 and put him on a three-stop strategy, which was calculated to be the slower one before the race.

That put Verstappen into the lead and demoted Ricciardo to third behind Verstappen and Raikkonen.

That became fourth within a few laps because Ferrari followed suit with Sebastian Vettel on the next lap and then made the German's final stop before Red Bull to get him ahead of Ricciardo.

Ricciardo made his final stop on lap 43 - six laps after Vettel - and caught him with 10 laps to go.

The Australian made an aggressive but ultimately fruitless dive down the inside of Turn One on lap 59 with seven laps to go.

The move incurred Vettel's wrath as he had to take avoiding action before Ricciardo slid wide and off the track, allowing Vettel to edge back ahead.

"If I don't avoid him he goes straight into my car," Vettel screamed over the radio. "What are we doing, racing or ping-pong?"

Ricciardo kept trying, but Vettel was able to hold him off until with two laps to go Ricciardo suddenly lost pace with a left rear puncture and dropped back.

But he had enough time to make a pit stop for fresh tyres and retain fourth ahead of Williams' Valtteri Bottas.