Nico Rosberg will not be opening negotiations with anyone but Mercedes in the immediate future, according to former F1 driver Gerhard Berger, who is handling the German's contract negotiations. (Formulaspy.com)

Max Verstappen will start from the pit lane after Red Bull discovered the damage to his chassis was worse than expected following his crash in qualifying.(Autosport)

McLaren driver Jenson Button was lucky to escape serious injury when his car struck a dislodged drain cover during qualifying for the Monaco. (Daily Star Sunday)

The Italian region of Lombardy has pledged 5m euros to help ensure the Italian Grand Prix stays at Monza and does not move to Imola. (Paddocktalk.com)

Lewis Hamilton fears Mercedes will have to consider team orders if he and Nico Rosberg crash again this season. (BT Sport)

Hamilton "is not stupid" and does not need to change his party lifestyle in order to get his championship challenge back on track, according to Sir Stirling Moss. (Daily Mail)

Nico Rosberg, who is out of contract with Mercedes at the end of the season, has ruled out a move to Ferrari. (Mirror)

Red Bull team principal Christian Horner has said the signing of a 2017 Formula 1 engine deal with Renault is now "a formality". (Autosport)

The FIA has lifted its ban on the discarding of visor tear-offs after discussions at the Monaco drivers' briefing. (Autosport)

Jenson Button says he was "lucky" to escape injury after his McLaren hit a drain cover that was dislodged by Mercedes' Nico Rosberg during Thursday's practice session at the Monaco Grand Prix. (Sky Sports)

Sebastian Vettel says Ferrari will be competitive at Monaco, despite a low-key start in practice and a couple of brushes with the wall.(GPupdate.net)

Williams driver Felipe Massa is using his one permitted change of helmet livery this season to sport a design by Brazilian graffiti artist Os Gemeos in Monte Carlo. (@massafelipe19)

The family of the late Jules Bianchi has announced the creation of the Jules Bianchi Society, designed to help young kart drivers climb the motorsport ladder towards F1. (motorsport.com)

Sebastian Vettel is confident Ferrari have what it takes to win a first grand prix in Monaco since 2001. (Gazzetta dello Sport)

Daniel Ricciardo says there was "no agenda" behind Red Bull's pit stop strategy that cost him victory at the Spanish Grand Prix. (Fox Sports)

Indonesian driver Rio Haryanto needs more money to keep his seat at the Manor Racing team, but is safe for the first half of the season. (Reuters)

Renault are enjoying the view from their "secret lair" ahead of this weekend's Monaco Grand Prix, tweeting: "We must mention the view we get from our secret lair here at the #MonacoGP. Cannot. Stop. Staring. #ToughJob"

Fernando Alonso and Max Verstappen were among the Formula 1 stars who took part in a charity football match before the Monaco Grand Prix, helping to beat an All Stars XI led by Leicester's Premier League-winning manager Claudio Ranieri.(Daily Mail)

Romain Grosjean will pay tribute to Jules Bianchi at this weekend's Monaco GP by wearing a special helmet featuring graphics of the late French driver. (Formula1.com)

Mercedes have dismissed Italian newspapers reports that Lewis Hamilton could miss the Monaco GP because of an alleged mysterious nightclub incident in Cannes. (GrandPrix.com)

Honda boss Yusuke Hasegawa says McLaren can be competitive "throughout the weekend" in Monaco because of the characteristics of Monte Carlo's street circuit. (ESPN)

Daniil Kvyat, now back at Toro Rosso, believes he would have outscored Daniel Ricciardo for a second successive F1 season in 2016 if Red Bull had kept him.(Autosport.com)

Manor Racing gained their first World Championship points at Monaco in 2014, and racing director Dave Ryan says they will be "ready for any opportunity" in this year's race.(Pittpass.com)

It is perhaps the most glamorous weekend of the F1 calendar and, Force India are savouring every moment. 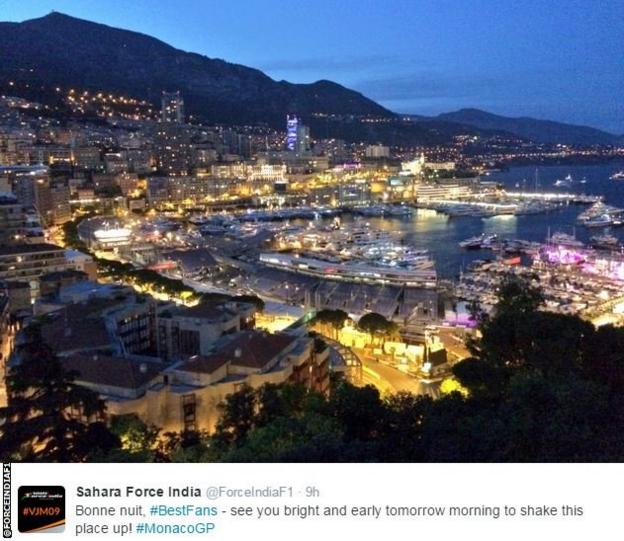 Haas team owner Gene Haas says Romain Grosjean is achieving results that the VF-16 Formula 1 car should not be capable of yet. (Autosport)

Honda is planning to use all of its engine performance 'tokens' by the Belgian Grand Prix in August. (Grandprix.com, via Auto Motor und Sport)

In a video posted on his Facebook page, Red Bull's 18-year-old Dutch driver Max Verstappen looks back on becoming the youngest winner in F1 history.

Renault will only have enough parts to give its works team and Red Bull one of its new Formula 1 engines each at the Monaco Grand Prix. (Autosport)

Williams has already shifted its aerodynamic focus away from their current Formula 1 car and on to its 2017 challenger in a bid to get a head start on next year's regulations. (Motorsport.com)

World champion Lewis Hamilton has dropped his strongest hint yet that he will finish his Formula 1 career with Mercedes. (Sky Sports)

Renault boss Frederic Vasseur has played down the chances of a "big name" driver joining the team for 2017, despite links with former world champion Fernando Alonso. (Grandprix.com)

Sauber team principal Monica Kaltenborn says that Haas' policy of buying as much as possible from Ferrari is not the "right way" to construct an F1 car. (Grand Prix Times)

Never want to miss the latest Formula 1 news? You can now add F1 and all the other sports and teams you follow to your personalised My Sport home.