Ricciardo, who finished the session 0.606 seconds ahead of Hamilton, said winning was "definitely my aim".

"I feel it's my time and this is the best track to do it," he added. "You can really show personality on this track with commitment and confidence."

Saturday's qualifying and Sunday's race are live on the BBC sport website and BBC Radio 5 live.

Ricciardo's dominance was such that he finished almost a second clear of both championship leader Rosberg and Red Bull team-mate Max Verstappen, who won in Spain last time out.

"Mercedes will turn it up and get a lot closer, but hopefully I can stay in front," added Ricciardo.

The 26-year-old was highly impressive throughout second practice, not only beating Hamilton by a distance on their qualifying simulation runs but also proving faster in the race-simulation runs on a heavy fuel load.

Ricciardo said he had felt "more comfortable" with the car's balance and believed the team had made "some good progress".

He added: "It depends what the track's going to do on Saturday, but if it doesn't change much then I don't think we'll be touching too much."

Hamilton admitted Mercedes were "going to have a battle on our hands" when qualifying takes place on Saturday. 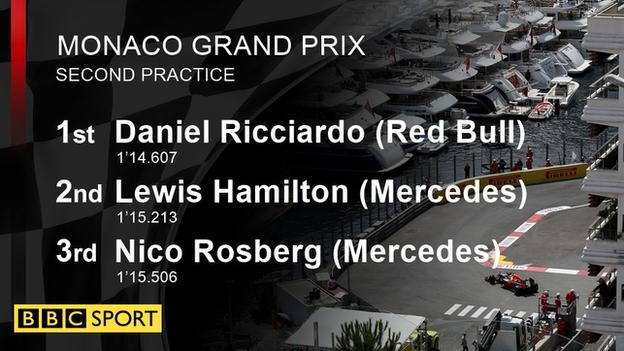 The triple world champion also warned that qualifying was more important in Monaco than at most other grands prix.

"Everyone expecting a good race should know this is a track that you really cannot overtake on and qualifying is going to be the race," he said.

A strategy error cost Hamilton victory in Monaco a year ago and he indicated that it would "come down to the one pit stop" this year.