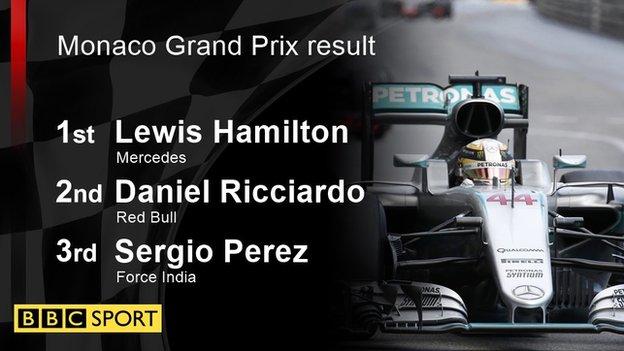 Lewis Hamilton took a superb victory in a close battle with Red Bull's Daniel Ricciardo in a thrilling Monaco Grand Prix to re-ignite his title campaign.

The world champion benefited from a slow pit stop for Ricciardo but also from his own brave call to delay a tyre change on a drying track until he could go straight to slick tyres.

He then had to defend from Ricciardo for 45 laps to win.

It was a masterclass of defensive driving that at times recalled McLaren's Ayrton Senna holding off the faster Williams of Nigel Mansell in the closing stages of this race in 1992, a battle that has gone down in Formula 1 folklore.

How did Hamilton do it?

The race started behind the safety car on a soaking track and victory hinged on a decision, after discussion between driver and team, not to switch to 'intermediate' wet tyres, as a step between the full wets on which everyone had started the race and the untreaded slicks.

He was the only driver - other than backmarker Pascal Wehrlein - to do that and the decision ensured he moved into the lead after starting third behind Ricciardo and Rosberg.

Mercedes said the decision was a joint one between driver and pit wall.

When the race started on lap eight, Ricciardo quickly built a huge lead as Rosberg struggled in the difficult conditions, for which Mercedes F1 boss Toto Wolff said was due to not being able to generate the correct tyre temperature.

On lap 16, by which time Ricciardo was 13.1 seconds in front, Mercedes ordered the German to let Hamilton by, realising that otherwise the race would be lost, and the Briton quickly pulled away at more than two seconds a lap.

Hamilton thanks 'gentleman' Rosberg for letting him past

"I'm kind of lost for words," said Hamilton. "I prayed for a day like this and it came through, so I feel truly blessed.

"That was the longest run. It was crazy how long it was, to understand how much wheel spin you were allowed, because you don't know how long the tyres are going to go.

"Daniel drove phenomenally all weekend and it was a lot of pressure. I'm sure he's not too happy but he should proud of the way he drove."

What on Earth were Red Bull doing?

Hamilton could only cut two seconds from Ricciardo's advantage until Red Bull's decision to fit intermediate tyres to Ricciardo's car on lap 23 gave Hamilton the lead.

The Australian quickly closed back in as Hamilton hung on despite his rapidly deteriorating 'extreme' wet tyres, making his sole pit stop on lap 31 and choosing the softest ultra-soft tyres.

Ricciardo stopped on the very next lap - choosing the slightly harder super-softs -and would have re-taken the lead but for the fact that he was delayed in the pits because Red Bull did not have his tyres ready.

Agonisingly for Ricciardo, Hamilton passed him as he came out of the pits to rejoin the race.

Hamilton had some scary moments as Ricciardo attacked for the rest of the race, none more so than on lap 37, following a restart after one of many virtual safety car period, this one for a heavy crash for the second Red Bull of Max Verstappen.

It was the third crash in two days on a chastening weekend for the Dutchman, who won in Spain on his debut for Red Bull last time out.

Did Hamilton squeeze Ricciardo towards the barrier?

As racing resumed, Ricciardo was right with Hamilton as they sped through the tunnel and Hamilton went too deep into the chicane, bouncing over the kerbs.

Ricciardo began to move alongside on the outside as they left the corner, but Hamilton gave him a squeeze and Ricciardo had to back off, uttering an expletive over the radio.

The incident was investigated by the stewards but no further action was taken.

The lead ebbed and flowed throughout the rest of the race but Hamilton did just enough, eking out his tyre life, to hold on for his 44th career victory, and undoubtedly one of his greatest.

He cut loose a little in the last 10 laps, setting fastest laps and building a bigger lead, to emphasise his control over the race.

The rain returned in the final three minutes of a race that ran to just under the two-hour time limit but to no ill effect.

Ricciardo was clearly distraught, saying over the radio at the end of the race: "Nothing you could say would make that any better. Save it."

After the race, he added: "Two weeks in a row now I have been screwed. It sucks. I didn't make the call. I got called, so they should have been ready. It hurts."

That was a reference to the strategy switch that cost him victory in the last race in Spain.

What happened to Rosberg?

It was the perfect result for Hamilton, his win and Rosberg's weak performance meaning he could make 19 points on his team-mate, which was badly needed after his difficult start to the season.

It was a race to forget for the German, whose poor pace in the wet conditions lost him places not only to Hamilton but also, as the pit stops unfolded to Force India's Sergio Perez, Ferrari's Sebastian Vettel and McLaren's Fernando Alonso, who all drove excellent races.

When the pit stops were finished and the track was dry, Rosberg was right behind Alonso but was unable to pass the double world champion, despite his car's significant pace advantage.

Rosberg even dropped back from Alonso in the closing stages, and lost sixth place to Force India's Nico Hulkenberg.

Perez, who progressed to third from seventh on the grid thanks to strong driving around the first pit-stop period, held Vettel at arm's length once the track was dry to take the final podium position.

His task was aided by a mistake by Vettel when he ran wide and came oh-so-close to the Massenet barriers late in the race.

The Ferrari driver closed in again but, on another difficult weekend for a team whose aspirations to be a true threat to Mercedes are evaporating rapidly, had to be satisfied with fourth.

In the other Ferrari, Kimi Raikkonen, second in the championship before the race, retired early after crashing at the hairpin, despite attempting to carry on with his damaged front wing scraping along underneath the car.

Alonso's fifth, an excellent effort under pressure from a much faster car, equalled his own best-ever result for the McLaren-Honda partnership since it re-started in 2015.

The Saubers of Felipe Nasr and Marcus Ericsson collided at Rascasse, forcing both cars out a lap after Nasr was told on team radio to let the Swede past and refused.

Ericsson was subsequently given a three-place grid penalty for the next race in Canada on 12 June, as well as two penalty points on his licence, taking his 12-month tally to six.

Toro Rosso's Daniil Kvyat was given the same punishment for crashing into Renault's Kevin Magnussen - also at Rascasse - earlier in the race,

The Russian now has seven points on his licence. Reaching 12 points would trigger a one-race ban.