Another new grand prix, another country seeking to present a more alluring face to the world.

Such is the way of things in modern Formula 1, with the new street race in Baku in Azerbaijan joining the calendar two years after Sochi in Russia.

Note the similarity in the titles - it's about positioning a country considered to be on the border of two continents as very much part of Europe, for financial and geopolitical reasons.

"The primary objective is to promote our city from different points: from the touristic point of view, investment," says race organiser Aria Rahimov, who is also the son of the country's sports minister. "This is a great opportunity to do so."

This is the modern trend for expanding the calendar, a policy described by F1 board member Sir Martin Sorrell on the sport's official website as pursuing "fast-growth markets".

In another au point observation, Sir Martin added: "If you run a country and want to put it on the global map, you don't have so many choices."

It is a policy that leaves little wriggle room for races in the traditional markets that house much of F1's fanbase - as can be seen from the struggles faced by Germany and Italy in keeping their historic races on the calendar.

But F1 boss Bernie Ecclestone has little time for sentiment or tradition. And nor, it seems, for the wider concerns many have about the locations of some of these new races.

Azerbaijan is far from the first country to be introduced to the F1 calendar whose government has been accused of authoritarianism and human rights violations, and it won't be the last. Ecclestone, as ever, shrugs this topic off.

"I think everybody seems to be happy," he said when questioned last year about the concerns of the likes of Human Rights Watch and Amnesty International on Azerbaijan. "There doesn't seem to be any big problem there."

One could argue all day about the rights and wrongs of entwining sport with politics, but F1 is far from the only sport to make questionable judgements about where to host its events - as the furore over the Qatar World Cup in 2022 proves. They're all, at the end of the day, following the money. 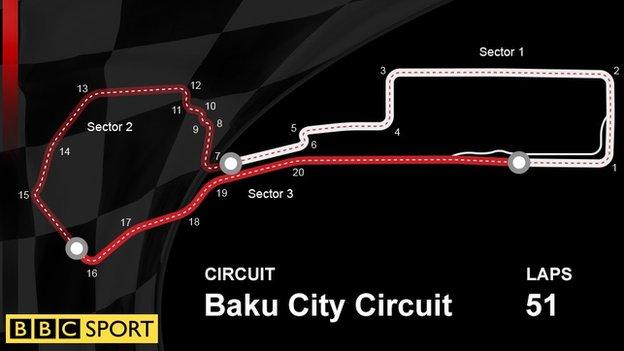 And a race is happening, whatever individuals might think about it.

The track is laid out on the seafront of the nation's historic capital, and cars will blast past many of its landmarks, including Government House, constructed when the country was part of the Soviet Union.

The most evocative part promises to be Turns Eight, Nine and 10, where the track narrows dramatically to pass the old city walls and the 12th century Maiden Tower, the brickwork protected for the weekend from what seem already to be the almost inevitable collisions.

Much of the first part of the 3.7-mile lap is composed of right-angled corners; it opens out from the old city into a series of long sweepers, which may or may not be taken flat-out, and a very fast stretch of straight as the cars return along the waterfront. Here, cars will top 200mph. On a street circuit…

The long, long fast section that marks the end of the lap is likely to play to the strengths of Mercedes and leave Red Bull and Ferrari fighting for second best.

But whatever the competitive order, those who have already been say it should make for a spectacular event in what they say is a "cool" and interesting city.

So where in Europe is the European GP being held?

"It's a goal - and the Germans go mad at the referee"

A new race - and an old race