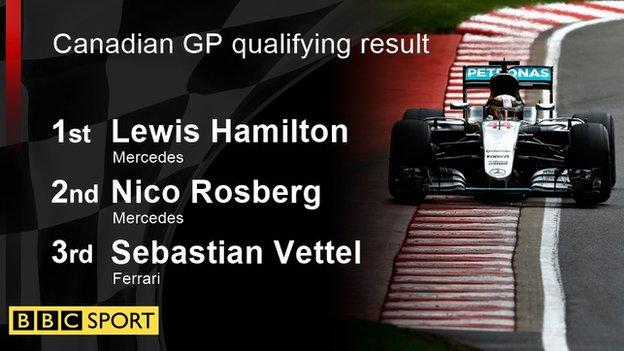 The world champion, who won his first race of 2016 in Monaco two weeks ago, beat the German by just 0.062 seconds.

Sunday's race - set to be attended by more than 100,000 people - is live on the BBC Sport website and Radio 5 live Sports Extra.

There's something about Hamilton in Canada

Neither Mercedes driver improved on their final runs as Vettel, who until then had been more than half a second behind, got closer than he has managed all season.

But Hamilton and Rosberg had done enough with their first laps, which were 0.4secs quicker than anyone else at the time.

It was exactly what Hamilton wanted as he seeks to close a still-significant gap on Rosberg in the championship after a difficult start to the season.

His Monaco win cut his deficit to 24 points - but that is still nearly a complete win behind.

Wet weather is predicted for the race on Sunday as a summer chill hits Montreal and that is both an opportunity and a risk for the Briton.

He excels in wet conditions, but the Circuit Gilles Villeneuve, a semi-street track on a man-made island in the middle of the forbidding St Lawrence Seaway, is treacherous in good weather and more difficult again when it rains.

"It doesn't matter how far you are ahead as long as you are ahead," said Hamilton after qualifying. "In practice it was a much bigger gap. Today I didn't have the pace I had yesterday, but clearly it was enough."

Ricciardo's brush with the 'wall of champions'

Just like Vettel, Ricciardo also saved his best for last - 0.091secs behind his 18-year-old team-mate after their first runs, the Australian pushed to the edge and beyond on his final lap to assert his superiority.

Ricciardo, who clouted the wall on the exit of the notorious final chicane on his quickest lap, is determined to have a good race in Canada after being robbed of victories in both the last two races by team strategy and pit-stop errors.

However, Carlos Sainz, driving for Red Bull's junior team Toro Rosso, shattered his car against the 'wall of champions' final chicane during the second session, ending his hopes of making the top 10 shootout.

At the tail end of the top 10, Fernando Alonso has now made it into Q3 for McLaren-Honda for three races in a row and will line up behind Force India's Nico Hulkenberg.

The Spaniard's team-mate Jenson Button was 12th, just under 0.2secs adrift of Alonso when it mattered after an impressive weekend to that point.

Button said the difference between them was that Alonso had benefited from a "tow" - being in his slipstream - on the decisive lap. But a mistake by the Englishman - when he locked up at the hairpin and lost time - may not have helped either, although he claimed that he actually gained time there on his final lap despite that.