The Briton referenced one of the former heavyweight boxing champion's famous quotes - "float like a butterfly, sting like a bee" - on his slowing down lap.

He added: "Ali was someone who inspired me so much. I'd love to be able to dedicate this to him and his family."

Hamilton said he was constantly thinking of Ali - who he met a few years ago - in the last 15 laps of the race in Montreal, adding: "It was really, really weird.

"I was driving and I was just thinking of him and thinking maybe he would be watching the race, I don't know."

Hamilton, the defending champion, described Ali as a "unique, iconic individual who had a character unlike anyone else's".

He added that he had admired Ali's confidence and charisma, as well as his ability to "outwit and outsmart his opponents".

The 31-year-old also said he wanted to be like Ali when he was growing up.

"Coming from a family of similar background in a sense of ethnicity, it was someone to look up to," said Hamilton.

"In Formula 1, there was no-one of the same colour as us as a family, so it was another athlete for me to look up."

Sunday's win, the 45th of Hamilton's career, followed his victory in Monaco, prior to which Robserg held a 43-point lead over the triple world champion. 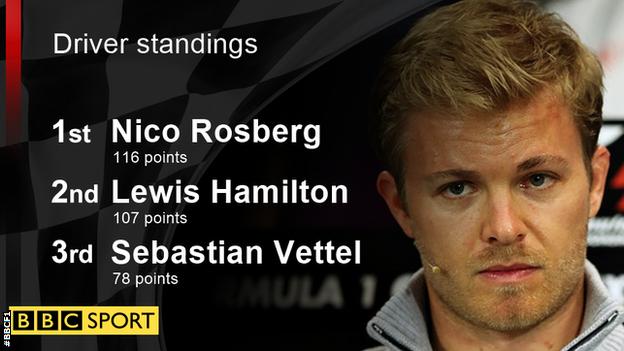 "I feel incredibly grateful and very blessed to have had these two great weekends," said Hamilton.

A collision with Hamilton as they disputed the first corner behind the fast-starting Ferrari of Sebastian Vettel left Rosberg ninth on the first lap.

The German said he had been angered by the situation at the time but later accepted that it had been tough but fair racing.

"It was very costly for me because I lost a lot of places and from then it was an uphill battle," he said.

"It was a hard manoeuvre from him but racing and I need to do a better job next time."