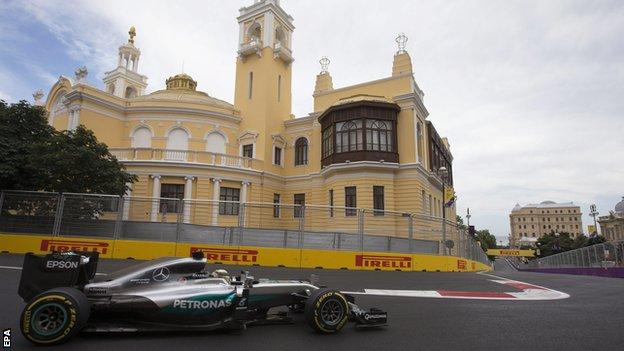 Mercedes' Lewis Hamilton said he was revelling in the "challenge" of Formula 1's new street track in Baku.

The world champion was 0.7 seconds quicker than team-mate Nico Rosberg by the end of Friday practice for the European Grand Prix in Azerbaijan.

"It has a combination of corners like Monaco and you really have to commit to corners with barriers on the exit, which is really tricky," he said.

"I had my heart in my mouth. It is a real challenge to be on the limit."

Hamilton said the track - the second longest on the calendar, with the longest straight, on which cars are approaching 220mph - rewarded bravery.

"Configuration-wise, it is not massively challenging," he said. "But it is like a big balls track, just like in Monaco.

"We are doing 220mph down the main straight, 200mph down some of the others.

"Turn One you can dive out and go straight on. But Turn Three, once you commit to the corner, if you don't make it, you're in the wall. So you really need your confidence."

Some drivers have expressed concerns about the lack of run-off areas at some corners, and raised them with FIA F1 director Charlie Whiting in the drivers' briefing on Friday evening.

But Hamilton said: "I am well happy. One thing for sure, these drivers they moan so much about so many things. I guarantee you.

"It is really bumpy down the straight and you can't really see Turn One that well and it's really hard, but that's a part of racing.

"These guys they want it to be smooth like, smoother than ever, no vibrations and no bumps. They want to take all the character out of these tracks.

"I guarantee you today there will be certain people who say these things but I will just sit there and smile."

However, Rosberg said Hamilton had also expressed reservations about safety privately, particularly about the pit-lane entry.

"The track is cool to drive. They have done a good job," Rosberg said. "But there are a few spaces that are a bit too risky, I find.

"The pit entry is really on the edge. We are going to discuss that in the driver meeting now and see if something needs to be modified there."

McLaren's Jenson Button, who also expressed safety concerns, said he had raised his worries with Whiting.

"I spoke to Charlie this morning and he has assured me all the checks have been done and correct measurements have been used," Button said.

"But driving the circuit is never going to change the way you feel because I haven't hit the wall so I don't know how it feels. You don't know until you hit something."