The big question heading into this weekend's Hungarian Grand Prix is whether Red Bull can beat Mercedes on merit for the first time this season.

Mercedes have already said they regard Red Bull as a "major threat" in Hungary, and there is every reason to believe they are right.

Red Bull are the only team other than Mercedes to have won this year - but that was in Spain, where Lewis Hamilton and Nico Rosberg crashed together on the first lap, opening the way for a brilliant maiden victory for Max Verstappen.

Red Bull should have won in Monaco with Daniel Ricciardo, only for a pit-stop mix-up to scupper them and hand the win to Hamilton. They have not been as close since, but the Hungaroring, in theory, gives them a chance to make amends.

It is a track with very similar characteristics to Monaco: relatively low speed, lots of corners, very few straights. It should suit the Red Bull down to the ground.

If they have raw pace in the way they did in Monaco with Ricciardo and can qualify at the front, that would give them complete control of the race, because it is such a difficult circuit to overtake on.

The Red Bull has a lot of usable aerodynamic downforce - just what you need in Hungary - and two drivers in Ricciardo and Verstappen who are pushing like hell and have a point to prove.

It would be unwise to get too carried away, though. Red Bull have definitely improved since last year - up to this point of 2015, they were an average of 1.4 seconds off pole; this year it is 0.963secs.

That sounds like a large gap, and it underlines just how strong Mercedes are. But in fact the gap fluctuates hugely depending on the track - Red Bull were on pole in Monaco and only 0.3secs behind in Canada, but 1.4secs off in the next race in Azerbaijan.

That's one proviso to bear in mind. Another is there is a big unknown this weekend, which is the Hungaroring has been resurfaced since last year.

It used to be a slippery, dusty track with a unique, abrasive, low-grip asphalt. But the new surface is apparently the very high bitumen, dark-surfaced asphalt used in Austria and Brazil.

If it is hot as usual, that will exacerbate the problems of keeping tyre temperatures under control - and Red Bull have struggled with that at a couple of races recently.

Which Red Bull driver is the one to watch? 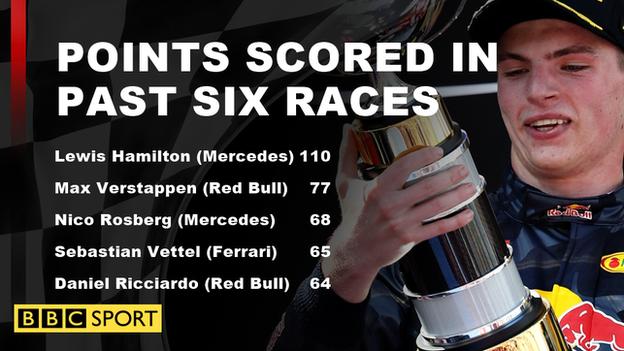 Since Verstappen joined Red Bull at the Spanish Grand Prix, he has done an absolutely stellar job, scoring more points than anyone other than Hamilton, and 13 more than Ricciardo.

But that statistic is misleading, because Ricciardo would have won in Spain and Monaco without the strategy call that lost him the lead in Barcelona and the pit-stop mix-up in Monaco.

So Ricciardo should have 20 points more than he does - and Verstappen seven fewer. Which would switch them around.

But there is another stat which underlines how good 18-year-old Verstappen has been. He has scored the same number of podiums since joining Red Bull five races ago as Ricciardo has had since the start of 2015. It really shocked me when I heard that.

But it should not detract from the fact Ricciardo has had a great season without much to show for it. He is due a good race.

The table of highest points scorers since Spain underlines how Red Bull have taken over from Ferrari as Mercedes' biggest challengers - Hamilton is top, followed by Verstappen, Rosberg and Sebastian Vettel.

The best-scoring Ferrari driver since Barcelona is Vettel - and he has scored 12 points fewer than Verstappen. Collectively, Red Bull have outscored Ferrari in that period by 13 points.

That reflects a number of things: the progress Red Bull have made thanks to the major Renault engine upgrade that arrived for Monaco and Canada; the string of reliability problems that have hit Ferrari's lead driver Vettel; and Ferrari's struggle to coax consistent pace from their car.

In past seasons, reliability was a strongpoint for Ferrari. Even when the car was not quick, it had excellent reliability, enough to allow Vettel's predecessor Fernando Alonso to fight for two championships.

Now, the car is still lacking pace, but the finishing record has gone, too. Vettel has been hit by a string of gearbox problems, and that is one of the fundamental worries surrounding Ferrari at the moment.

It has been a strange season from Ferrari, reflected by the past four races. They were contenders for victory in Canada, but absolutely nowhere at Silverstone. And somewhere in between in Azerbaijan and Austria.

The Ferrari has a narrow operating window. If the car can be made to switch the tyre on, the performance comes. If it can't, they are way off.

Their biggest problem is that qualifying is one of the times when the Ferrari does not work.

I don't think it's as simple as the Ferrari lacking downforce. I believe downforce is a factor, but aerodynamics is not about the biggest numbers - it's about the best average.

It's no good chasing the biggest number possible if it makes the car so unpredictable and unstable that the driver can only access it 80% of the time.

Cars have to work in all types of conditions, on all circuits, on all compounds of tyres and in all weather. The best cars combine a high downforce figure with a big working window.

It's not just Ferrari with this problem.

The Force India works really well in tight, slow corners, for example, but does not like long, flowing corners as much.

Williams struggle like mad on low-grip surfaces, like in Monaco, or when it gets cold and wet, but are OK when the track has more grip.

But Ferrari have a vastly bigger budget, higher aspirations and higher expectations than those teams and their performance is too inconsistent for where they want to be.

Watch out for McLaren

Like Red Bull, McLaren are another team who have made big improvements since last year - they are on average 0.8secs quicker relative to Mercedes than in 2015.

They had their best result of last season in Hungary with a fifth place for Fernando Alonso, and they should be on for another relativity strong race this weekend.

McLaren will be keen to take advantage of this opportunity. Their car has high downforce and, like the Red Bull, runs a lot of rake (back-to-front lean). Given that their head of aerodynamics, Peter Prodromou, joined from Red Bull a couple of seasons ago, that is hardly a surprise.

After Jenson Button's strong sixth place in Austria, Alonso was on top form in Silverstone and was at his hustling best in the race.

He was pushing Felipe Massa's Williams hard for ninth place, trying some really bold moves around the outside. In the end, he was caught out by the same damp patch at Abbey that sent Hamilton, Vettel and several others off the road.

But even in that situation he was impressive. He flew off the track at Abbey at 170mph, went through the gravel, tapped the barrier, drove back on to the track and immediately had his elbows out and was fighting again.

That is what McLaren need from him - not the slightly moaning, yet very targeted, radio calls we get from time to time, but the spirited fight, which is what Alonso does best.

McLaren won't have been upset that Alonso's spin possibly lost them a point for 10th place. Engineers and team bosses love to see their cars being ragged to the absolute limit.

They would prefer to see it being thrown around and thrashed and in the mix, doing what it shouldn't be able to do and not finishing, than tootling around and making it to the end.

The mistake meant Alonso ended up finishing a place behind Button when he had been well ahead of him all weekend. But he won't be bothered about that. He's won two world championships, so fifth, eighth, 10th, it doesn't really matter to him. Or Button for that matter.

For drivers of that quality, in the situation they are at the moment, it's all about the personal satisfaction.

You look to get the car in places it shouldn't really be. And you wait for it to become competitive.

There's a limit to how long you can wait, but at least Alonso is biding his time while being paid very well to do it.