Mercedes' Lewis Hamilton feels like he is still "chasing" in the championship despite taking the lead for the first time with victory in Hungary.

Hamilton fought back from what he described as "rock bottom" to lead team-mate Nico Rosberg by six points.

But the Briton said inevitable grid penalties he will have to serve because of early-season reliability problems were affecting his mindset.

"I am very proud of coming back, but there's a long way to go," he said.

Rosberg led by 43 points at one stage after winning the first four races of the season as Hamilton was hit by bad starts in the first two races in Australia and Bahrain and then failures of engine parts that left him down the grid in China and Russia.

"It's not massive," he said of taking the lead. "Right now, I am still with the same mentality of still chasing." 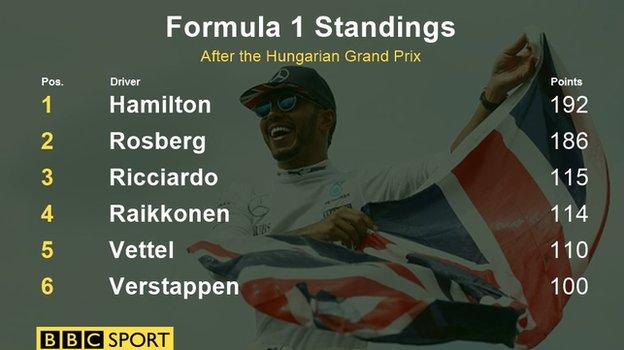 The engine failures mean he will use more than the permitted number of certain engine parts, which will mean a start from the back, most likely at either the Belgian or Italian Grands Prix after the August break following next weekend's race in Germany.

Hamilton said that, in hindsight, the crash that took out both Mercedes drivers on the first lap of the Spanish Grand Prix had been a critical moment.

"Spain has definitely ended up being a turning point," Hamilton said. "It didn't feel like it was; it was rock bottom: 'Basically, where do we go from here?' The only way was up.

"I managed to get my head together and get on with it even though I have fewer engines, and all these different things that didn't seem to be working with me, just deal with it.

"And since then we have pulled together and I really would love to come out of the next race with another result like this so when I do go to Spa or Monza, whichever one it is where I take the penalty and I start from pit lane or last place, that is the minimum damage, it doesn't mean I am 25 points behind.

"I don't really want to get back to there. I honestly feel we are in the strongest position we have been all year in terms of our performance and how unified we are."

Rosberg not counting the points

With 10 races remaining, Rosberg said he was not concerned about losing the championship lead.

"It's very close," he said. "It's been a good season so far up to now. It's been a good battle with Lewis and, as I've always said, I'm not counting the points, there's still a long long way to go.

"Everything's still possible and I just want to focus on winning races.

"That's what I wanted to do in Hungary, I had my full focus on that. It didn't work out unfortunately, just losing out in turn one, and now I move my focus to Hockenheim, because it's my home race and I'm really looking forward to going there, racing there. I love the track and so I'm going to try and win there."