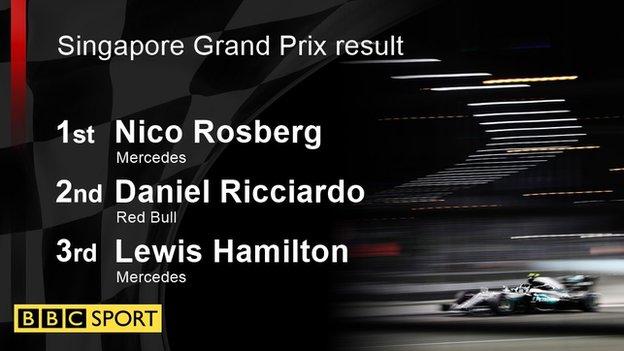 He held off a late charge by Red Bull's Daniel Ricciardo in a nail-biting climax and leads his team-mate by eight points after Hamilton took third.

Mercedes' decision to switch Hamilton to a three-stop strategy got him back ahead of Ferrari's Kimi Raikkonen.

When Ricciardo followed suit, he closed rapidly on Rosberg, who just held on.

Wow. Half a second between first and second

But as the laps ticked by the advantage of Ricciardo's fresh tyres began to fade and the edge was taken off his charge.

Rosberg had just enough pace, despite managing fading brakes, to keep the Red Bull at bay, crossing the line just 0.488 seconds ahead for a win that could prove crucial in the destiny of the world title.

Listen as Rosberg holds off Ricciardo to win Singapore GP

Hamilton had an out-of-sorts weekend, qualifying only third, 0.7 seconds slower than Rosberg, lacking grip after failing to set up his car properly because of track time lost to a hydraulic failure in Friday practice.

He drove a steady race, unable to do anything about Rosberg and Ricciardo ahead of him, and intermittently pleading with his engineers to come up with a strategy that could gain him places.

Both Mercedes drivers were struggling with overheating brakes and Hamilton struggled so much that he was caught by Raikkonen in the second stint, and actually lost third place following a mistake at Turn Seven just after half distance.

Raikkonen made his second stop at the end of the lap, Hamilton a lap later, and the world champion rejoined still in fourth place.

At this point, Mercedes decided to switch Hamilton's strategy and unleashed him from managing his tyres and told him to close on Raikkonen.

Hamilton's final pit stop on lap 45 triggered his rivals to follow suit, with Raikkonen pitting on the following lap and Ricciardo the lap after that.

The move worked for Mercedes - it leapfrogged Hamilton back ahead of Raikkonen and despite being on super-soft tyres rather than the ultra-softs chosen by Ferrari, Hamilton was comfortably able to hold on to the final podium place.

Behind the top four, McLaren's Fernando Alonso ran fifth from the start of the race after a quick getaway. It took him down the outside as Force India's Nico Hulkenberg and Toro Rosso's Carlos Sainz collided, and he passed Toro Rosso's Daniil Kvyat into the first corner.

Alonso held on to the place through the subsequent safety car period and the first and second stops, fending off heavy pressure from Sainz's team-mate Daniil Kvyat and Verstappen.

Around mid-distance, Alonso got some breathing space thanks to an intense battle between Kvyat and Verstappen.

Listen to Hulkenberg's crash at the start

The fight had added needle because of the Russian's demotion in Verstappen's favour after four races this season and after Kvyat had squeezed Verstappen close to the wall on a couple of occasions to keep him behind, the Dutchman complained over team radio.

In the end, Red Bull pitted Verstappen to give him some clear air to exploit his pace - a decision that ultimately won him sixth place.

But as the race progressed and strategies diverged, Alonso was passed by Ferrari's Sebastian Vettel, recovering strongly from a start at the back of the grid following a suspension failure in qualifying, and found himself defending from Verstappen, who was on fresher tyres, in the closing laps.

The extra grip from the rubber and the superiority of the Red Bull car meant Verstappen could pull off an aggressive dive down the inside of Turn Seven with a handful of laps to go.

Alonso had to be satisfied with seventh, behind Vettel and Verstappen, a strong performance at the end of a difficult weekend for McLaren.

Jenson Button retired at two-thirds distance after an early pit stop to replace a damaged front wing and spending much of his time struggling with poor grip at the back of the field. 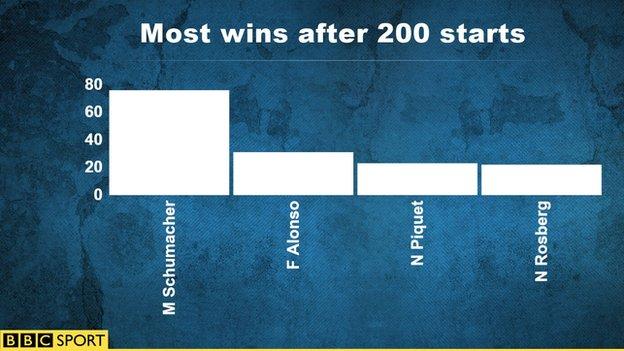