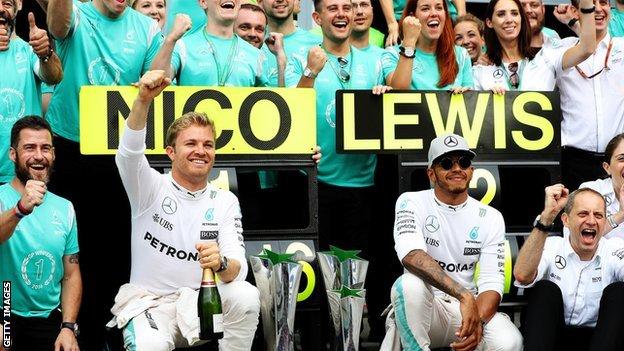 The mantra for both Lewis Hamilton and Nico Rosberg as they head into the final four races of the Formula 1 season should be: "It's not over until it's over."

Rosberg has a 33-point lead, which sounds huge - more than one complete race win. But there are 100 points still available and it is still eminently possible that it can swing back to Hamilton.

Hamilton has already recovered a similar gap this season in a similar time - in the four races from Monaco to Austria, he reduced a 43-point deficit to an 11-point one. That's 32 points, only one short of what he needs to do now.

We have seen Rosberg have shocking races, such as Monaco, where he just seemed to be completely out of kilter.

And we have seen Hamilton have weekends where he just did not seem to be quite at the races - such as Singapore, a track where he would be expected to be very good, but he just didn't quite have it.

History also suggests it is a long way from over.

In 2007, Hamilton, then at McLaren, was 17 points ahead of Ferrari's Kimi Raikkonen with two races to go. There were 10 points for a win. Raikkonen won both races, Hamilton went off in China and, after a scramble at the last race in Brazil, Raikkonen won the title by one point.

Hamilton has already been through three of these tight battles - and he has won two of them, in 2008 and 2014.

And look at 2010, when Fernando Alonso, then at Ferrari, was leading the Red Bull drivers Mark Webber and Sebastian Vettel by eight and 15 points. Hamilton was also in the frame mathematically, but was so far behind he was never going to do it.

Everybody thought it would be Webber challenging Alonso, but all of a sudden Vettel came out of nowhere, had a clean race, Webber and Alonso were compromised by their teams fighting against each other and Vettel sneaked the world title.

The biggest difference this year is in all those examples there was wider competition, it was not just a fight between two drivers in one dominant team.

Mercedes have been so strong and really only Red Bull can challenge them and mix it up with Hamilton and Rosberg, and even then only in unusual circumstances.

If Ferrari get it totally right, they could be slightly in the mix, but really Mercedes have to be careful of only two cars.

For both drivers, the maths are simple - Hamilton really needs to win all the remaining races; Rosberg needs only to finish second to Hamilton in all of them. That gives both a clear focus. But so many more things can come into it than that.

So there is no doubt Rosberg is in the ascendancy. But it is not won until the chequered flag comes down in Abu Dhabi.

Psychology can play a part

Rosberg has been consistently repeating a mantra this season - he's just taking it one race at a time and trying to do the best he can on a given weekend.

I did the same during my career. Early on, when I was younger, I would look too far ahead when I was in a situation to win a championship.

The problem with that is, by looking at the end goal, you lose focus on the day to day.

It's effectively the same as the old adage you've got to walk before you can run.

That is effectively what Rosberg has done.

I suspect he has realised that, in the past, he maybe has looked too much at the big picture. Hence his very purposeful statements that he is only looking race by race. It's almost like by saying it he is reinforcing that approach in his own mind.

F1 is a mind game. And Hamilton also plays mind games with himself. A good example was when he said in a BBC interview in Malaysia that he likes jet lag, that he likes to be "a bit off time". That was for his own benefit, as much as ours.

Every driver has their own inner battle, and it is about controlling your emotions.

This is a high-stakes game. It's a world championship. The best driver in the world, by one measure, is going to be crowned at the end of the year. Don't tell me there is anyone in sport who would not have some nerves in that situation. Everybody does. Fact.

By contrast, Rosberg has been in it and got tantalisingly close in 2014, and that's it. He was nowhere in 2015.

Adding to the pressure on Rosberg is he is not a silly guy, and he will realise this is probably his best chance.

Not only is there unlikely to be another year in which the reliability between the two Mercedes is as skewed in one driver's favour as it has been in Rosberg's this year. But there is also a big rule change coming for 2017 and there is no guarantee Mercedes will have the same advantage. So he will want to get this one over the line.

You may well be wondering how much harder it gets to stick to that race-by-race approach as the season comes to its climax.

It builds up the longer the season goes on, but it's really only at the last race when it really starts to take its toll. It comes down to the critical points - qualifying and the start.

Those are the highest-risk moments of the weekend, in terms of making a mistake in qualifying or the problems Hamilton, particularly, has had with the starts this year.

That's where you can end up in a compromising position and once you're behind and having to make up ground you have to take additional risks.

It's only at the last race that the "taking it race-by-race approach" starts to become more difficult. Because this is the day, the race. In two hours' time you can be world champion, or not.

A great example of that was Carlos Reutemann in Las Vegas in 1981.

The Argentine Williams driver needed only to finish ahead of rival Nelson Piquet of Brabham in the final race that year to win the title. He qualified on pole, but he was fourth by the first corner and faded to seventh in the race.

Piquet, who had to be helped out of the car at the end of the race he was so exhausted, finished fifth and won the title. Reutemann just fell apart, and that was all in the head.

Hamilton has been very up and down in terms of results since the summer break. He drove a great race in Spa to finish third from the back of the grid, then dominated Monza only to mess up the start and get beaten by Rosberg.

In Singapore, he was nowhere by comparison. Then he dominated Malaysia until his engine failure while leading, and in Japan last weekend he was again slightly off Rosberg's pace, and messed up the start.

He was unfortunate in being on the wetter side of the track at the start, but that was not the only thing that went wrong, getting some wheelspin as well.

Starts have been Mercedes' weak area this year. But for some reason Hamilton has had more difficulty than Rosberg - it's 5-3 in terms of bad starts.

If I was Hamilton, I would simply focus hard on getting that sorted out, because he has to make four good starts in the final four races. But then you have make sure you don't make that the real tension point.

If he can sort that out, I think he can win the races, and after that he can't change anything more. He can just watch what happens behind him.

Japan was a difficult weekend all round for Hamilton. He also got himself embroiled in two controversies with the media, neither of which was necessary, both of which were potentially counter-productive.

It is true to say that on the one hand we want the drivers to be using social media to connect to the fans, but that having done that Hamilton has been criticised.

But, having said that, the official news conference was not the appropriate time or place to be doing it, and it was a little bit silly to do what he did.

The problem was that it became a talking point. That wound him up, created tension and inner angst. And then he made more trouble for himself by refusing to answer questions in his post-qualifying news conference two days later.

He had a right to say what he did that day, and was quite polite in the way he did, I'm told. But whether it was the right thing to do is another matter. It simply created another talking point around Hamilton, and it certainly didn't defuse the pressure.

At the same time, his team-mate was able to glide along out of the spotlight.

You don't need that sort of distraction as a driver. You need to focus and concentrate on the only thing that matters, which is winning the races, not worrying about whether the media have been disrespectful or whatever.

I would think he will be avoiding that in the next few races.

At the same time, that is who Lewis Hamilton is, and people love him or hate him for it.