Fernando Alonso won the second of his two world titles 10 long years ago this weekend.

In the decade that has passed since then, the man many in F1 still regard as the best driver on the grid has come agonisingly close another three times. And his quest for that elusive third crown has led to the two most trying seasons of his career with his current team McLaren-Honda, who he joined in 2015 after losing faith that Ferrari would ever get him there.

The struggles of 2015 and 2016, and the passing years, have shifted his perceptions about the importance of winning another championship - at least in terms of the simple statistics of it.

Now, in an exclusive and wide-ranging interview at the US Grand Prix, he tells BBC Sport that a third title would mean "probably less than people think".

"It would be nice obviously to win three, to have the same as Ayrton [Senna]," Alonso says. "To win five would be even better, to win seven… It is always a non-stop wish.

"But it will mean a lot more than the number three. It would mean winning for McLaren-Honda - how the project grew up in such a short time. That would be the biggest thing for me now."

Alonso admits that the past two years, fighting to even make it into the top 10 on the grid, have been: "Tough definitely - [I'm] missing the podiums a lot, missing the victories.

"But we work hard, we took that challenge and when we see progress like this year everyone is even more motivated.

"The day that arrives the first victory or the first win for McLaren-Honda will be a massive achievement for all of us. That chase is probably the motivation we are finding now because as you said missing the victories is very frustrating."

Although driving a car unbefitting of his talent, Alonso remains a gold standard, a man admired throughout his sport for the unrelenting excellence of his performances.

It is there almost every weekend - in the incredible first laps, often making up huge numbers of places; in sometimes freakish performances where he can seem to transcend the performance of his car.

One of those came in Austin last year. In a car usually 2.5 seconds off the pace, in the first 20 laps of a wet race he was faster on nine of them than leader Lewis Hamilton's Mercedes.

How does he do it?

"Last year here we had definitely a very difficult weekend - a difficult season - and here [Austin] we had some penalties and some things that didn't work and then in the first corner we had an incident and we were last.

"So when you are last, you are frustrated and then you risk a little bit more.

"The explanation of the fastest laps in the beginning of the race in a wet circuit is probably more about doing something out of the limits because you don't care any more.

"And then for the recovering places at the beginning of the races, when you start at the back it is easier.

"I would like not to recover any places, start first and be first, but it is a way of probably experience, intuition. I know the circuits quite well after 16 years in F1 and I know where sometimes the incidents happen or what lines to take in which corners, so probably I have a little advantage on those."

'This guy is a marker for the car. He is always there'

Some argue that McLaren have wasted Alonso's $40m (£32m) annual salary while they have an uncompetitive car. But racing director Eric Boullier, who was instrumental in attracting him to the team from Ferrari, says he would do it all over again.

"This guy, first of all, I never saw him being in the wrong place in any session in the last two years - he is always on top," Boullier says. "He is a marker for the car. He is never off his game. He is always there.

"You trust him when he's on the track. And off it, he doesn't waste time with details because he can adapt. He trusts us and he knows we will correct them. He just focuses on what stops him going faster. That's priceless."

This consistency - the ability to drive any car, no matter how it is behaving, to its limit - is something very few drivers can match. And Alonso is well aware of it.

Ask him what is his biggest strength, and he says: "Probably in the car to be fast in most of the conditions, let's say, or with any of the cars. I adapt my driving style more or less to anything, from go-kart to motorbike to wet, more downforce, less downforce, Pirelli, Bridgestone, Michelin, V8, V6, whatever.

"It seems I adapt a little bit quicker than some of my team-mates, at least, who are my only comparison because the other cars it's difficult. Some weak points I won't say obviously because then everyone will know.

"Out of the car, probably I remain more or less focused on the important things, try to always be motivated all the time, training all the time, don't get any distractions. I don't have an exuberant lifestyle or anything like that. I try to concentrate on my job and after I finish F1 one day I will live life differently but now it is time to work."

The roots of his skills, he says, lie in his very early days in motor racing.

"The start of your career has some implications for the rest of your life," he explained. "I did my first go-kart race in Spain at three years old and at 17 I switched to single-seaters.

"My mother worked in a shopping mall, my father in an explosive company, and we didn't have money to pay for wet tyres for go-karts. So every time it was raining, I raced with the dry tyres while all the others were racing with the wet tyres.

"Obviously, I was lapped like eight times. It's not like I was winning with the dry tyres - I am not superman; I was losing by a long way. But I had to drive with those tyres because we didn't have any other tyres. So even if you are last, they switch on the engine and you race. So it has been probably a continuous evolution of my style, adapting."

Alonso's career has spanned many eras of F1 - V10 engines, V8s, hybrid V6s, a tyre war, control tyres from Bridgestone and now Pirelli. And he has raced against three generations of drivers.

He was the man who ended Michael Schumacher's reign, and he still regards the great German as the best driver he has raced against. He has battled with the likes of Lewis Hamilton, Sebastian Vettel and Kimi Raikkonen for the past 10 years; now he faces a new generation.

His best year, he says, was 2012, when he came oh-so-close to winning the championship in what was probably the third or fourth best car on the grid, in a season's performance that ranks with any achieved by any driver in history.

His best race? He chooses two from his Ferrari era. "I would say Valencia 2012 - very emotional win starting 11th.

"But in terms of pure driving probably Malaysia 2010 was more difficult. I had no clutch and I had to drive touching the throttle in every downshift. We were fighting other cars. I didn't have sixth so from fifth I was changing to seventh all the time. All these things were very demanding, so that was the most difficult race I did."

Ask him who he thinks is currently the best driver, himself excluded, and he says it's a "very difficult question" before picking Red Bull's Daniel Ricciardo.

"In the way he approaches racing, he is always very committed to everything he does. On the track, you cannot see any mistakes when you are together with him," Alsono said.

"In the overtaking manoeuvres probably he is the best out there. When he commits to one movement, 99% of the time he will achieve the result he wanted.

"Obviously 2014 together [as team-mates] with Vettel it was an amazing performance he showed. He was way ahead of Vettel in every single point in the driving, in the approach, in the starts, in the pit stops, in the overtaking, he was beating Vettel so easily. So I have to say he will be right now my choice."

And the fire still burns 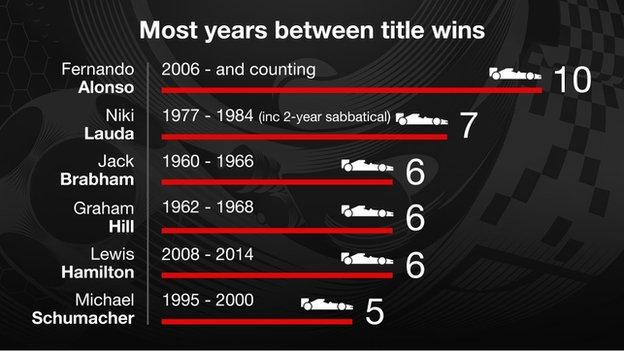 Alonso has kept his patience well over these past two years, but the determination to add to his 32 victories - sixth in the all-time list - remains as intense as ever.

Ask him what winning means to him, and he says: "It is everything. Everything we do in life is a competition, or it is for me. F1 is no different.

He has a contract with McLaren until the end of next season - when he "has to be confident" of returning to winning ways.

He has said many times this year that he will not decide his future until he has tried next year's new cars - and particularly the redesigned tyres from Pirelli, which has been asked to enable the drivers to push flat-out throughout a race again. This, Alonso says, will be crucial to whether he extends his career.

"So we need something that is consistent and it gives you adrenaline to drive, and you attack and you drive in an attacking mode. Now we are driving in a safe mode - we save fuel, we save tyres, we save everything. So that is not any more fun to drive.

"It is not that I am older than Kimi, who is 37 right now, I read. So it is not a problem of age; it is a problem of enjoyment.

"I will not know exactly until mid-next year how much I will enjoy it, and if I keep enjoying, I love motor racing so I will stay for a couple more years. If it's still a 'safe' formula, let's say, I will think of some other alternatives."