Lewis Hamilton took the win he so desperately needed at the United States Grand Prix but there is still a long road ahead if he is to win a fourth Formula 1 world title this year.

Hamilton's seventh win of the season was also the 50th of his career, to put him just one behind Alain Prost in second place in the all-time list behind Michael Schumacher (91 wins).

It was a fortifying weekend all round for Hamilton, who left behind the travails of the three Asian races and was on top form - both on and off the track - all weekend in Austin.

The 31-year-old Briton has now won four of the five races at the Circuit of the Americas - and five of the last six US Grands Prix if one counts back to the race's previous home at the Indianapolis Motor Speedway in 2007.

But Hamilton remains 26 points behind his Mercedes team-mate Nico Rosberg, who finished second, partially thanks to a stroke of luck with the timing of a virtual safety car.

Had that not been deployed - following a gearbox failure that stranded Max Verstappen's Red Bull out on track - Rosberg would have had to pass the Dutchman's team-mate Daniel Ricciardo to take second.

He may well have done so - he would have been on fresher tyres and in a faster car. But it was the latest in a series of situations in which luck has fallen Rosberg's way this season.

Hamilton back to his best

The Hamilton who turned up in Austin was a very different one from the one who had been in Japan two weeks previously, where his behaviour put him at the centre of a media storm.

Two controversial performances in news conferences in Suzuka were a distraction that Hamilton did not need, and whether that played a role in him qualifying only second to Rosberg and then fluffing his start will continue to be a question.

In Japan, Hamilton allowed very mild criticism in a very few media outlets following his distracted performance in the pre-event news conference to spiral into an unnecessary situation which led to him refusing to answer questions at a subsequent media appearance two days later.

Things have calmed down since. Hamilton has had his media team unblock the journalists they had blocked on Twitter, and he was back to his usual self in America.

Mercedes F1 team boss Toto Wolff said he felt the events of Japan were influenced by those the previous weekend in Malaysia, where an engine failure cost Hamilton a dominant win that would have put him back in the championship lead.

Hamilton admitted after his win on Sunday that Malaysia was "haunting" him throughout the race in America. And Wolff said: "That little trauma is going to remain for a while" for the whole team.

"Suzuka was very difficult," Wolff said. "Coming out of Malaysia, where he lost the win, 25 points gone, and would have caught up in the championship.

"It started unfortunately with the press conference and it went into a spiral. He had 10 days to recover and he came back strong."

Indeed he did. From the moment Hamilton took to the track in Austin, he looked invincible. It was one of those weekends.

He was blistering in the first half-hour of practice, a second quicker than Rosberg initially and still significantly ahead by the end. Second practice did not go so well, but on Saturday he was again supreme, and he carried that dominance into the race, while Rosberg made life difficult for himself. More of which in a moment.

Hamilton, though, rejected Wolff's explanation of the events of Japan.

"I don't feel that was the case," he said. "Of course, if we had come off a win in Malaysia I would have been on cloud nine going into the next race. I wasn't on cloud nine but I love it in Japan, I felt fantastic going into it.

"I was only off by 0.07secs in qualifying and the race was a disaster but, you know, I have battled through thick and thin through my whole career. It was nothing new to me. 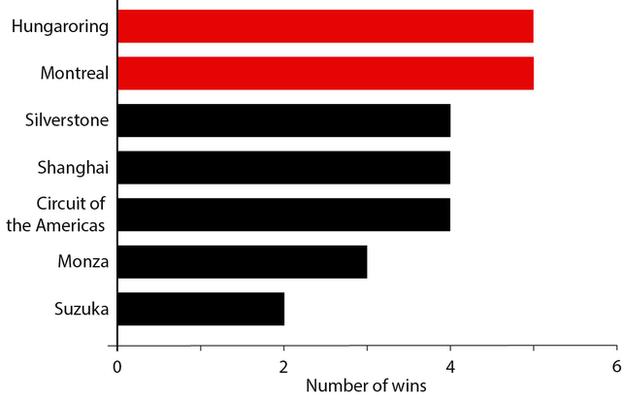 "I don't have the championships I have through luck. This is not my 50th win through luck. It is a lot of hard work, a lot of dedication from lots and lots of people but also from me. I feel great with the work we collectively did this weekend and I hope we can continue to do this moving forward."

At which point he paused, as if the moment was finally sinking in, and looked over to the back of the Mercedes area, where he was sitting facing the media, at guests Venus Williams and Lindsey Vonn, and smiled.

"There are so many incredible champions in this room, Lindsey, Venus; I feel really on the spot doing this press conference."

On the spot or not, it was a poised, considered, thoughtful Hamilton on show in America; very different from the haunted figure of Japan, no matter what he says.

But the apparent unfairness - as he sees it - of the differing reliability records of himself and Rosberg still smarts.

It is doubtful that Hamilton has done the maths, but the facts are that, regardless of the fact Rosberg has had his strongest year yet, the Briton would be leading the championship right now rather than trailing in it without the reliability issues.

That lead would be at least 14 points and possibly as much as 56 - even ignoring the greater number of poor starts he has made - depending on whether he would have won or finished second to Rosberg in the races where he had the problems.

While Hamilton has had engine failures in qualifying in China and Russia, a subsequent grid penalty that made him start from the back in Spa, and the failure in Malaysia, Rosberg has been affected only by a gearbox glitch that turned second into third at Silverstone.

"Not many seasons there can be 100% reliability on a car," Hamilton said once he had returned to the immediate matter at hand after the race. "Will that be the case on Nico's? I guess time will tell. I can't get fixated on that. I just have to focus on mine.

"I am hoping that for these last three races I have 100% reliability. That would be a breath of fresh air and I will try to utilise that opportunity with driving as I did today."

Rosberg still in the driving seat

No wonder Hamilton must wonder about his luck. Initially, Austin looked like it might turn into the bad race for Rosberg he needed.

Questionable positioning of his car at Turn One, followed by poor traction out of the corner, gave Ricciardo the chance to challenge him through the fast kink of Turn Two.

Despite being on the outside, Ricciardo made the move stick, Rosberg perhaps wary of the championship situation.

"Nico is in a difficult position," Wolff said. "He needs to look at each weekend at a time but also make sure he doesn't DNF [Did Not Finish]. We probably saw that in Turn One."

With Rosberg now third, and Ricciardo showing strong pace, Mercedes put him on a long middle stint on the medium tyre, the aim being to give him a short final one on the soft in which to catch and hopefully pass the Red Bull.

In the end, the virtual safety car gave him a "free" stop and he was able to fit fresh medium tyres and retain second place, Ricciardo swearing over the radio when he realised what had happened.

For the championship, in reality, it made little difference on paper - even had Rosberg finished third, he would still have been able to finish second in every race to Hamilton and still be champion. But it would have reduced the gap that little bit more - three points - and who knows what will happen in the remaining races.

"Nico was very strong in Singapore," Wolff said. "Lewis in Malaysia, Nico in Japan and Lewis here. It keeps bouncing between the two so I'm very curious to see how it is going to go."

Hamilton said: "All I can do is do my best and continue to drive as I have this weekend. Nico's been driving fantastically well all year. So the battle will continue. I'll be going for it."