Wolff also insists that Mercedes have a responsibility not to let team strategy decisions influence the title race between Lewis Hamilton and Nico Rosberg. (ESPN)

American team Haas are to use a new brake supplier at the Brazilian Grand Prix in two weeks' time after Esteban Gutierrez's brake failure at the United States Grand Prix. (Motorsport)

Force India are in no rush to make a decision about Nico Hulkenberg's replacement after the 29-year-old German agreed a deal to join Renault from next season. (ESPN)

Renault driver Kevin Magnussen believes the sport should focus on areas other than cockpit protection, after using the FIA's favoured halo system during Mexican Grand Prix practice and saying it was like a "cap that's pulled down". (Autosport)

Toro Rosso team principal Franz Tost says Formula 1 should do away with "nonsense" penalties and let the drivers race and have incidents. (Autosport)

Mercedes driver Lewis Hamilton believes he did not get the maximum out out of his tyres in Friday's practice for the Mexican Grand Prix. (Crash.net)

Hamilton's team-mate Nico Rosberg has predicted Ferrari will be a "big threat" over the Mexican Grand Prix weekend after an impressive display in Friday practice. (Grand Prix Times)

Ross Brawn reveals he is ready to get back into Formula 1. (Telegraph)

Mercedes driver Nico Rosberg has hit back at F1 boss Bernie Ecclestone's comments that it would be bad for the sport if the German won the title, saying he is "not here to please everyone". (Guardian)

McLaren's Jenson Button is "counting the days" until the end of the season, as the 36-year-old "can't wait" to explore life outside of F1. (Motorsport)

Red Bull driver Max Verstappen is going to try and curb his "arrogant" radio messages during races, as the 19-year-old Dutchman feels he is being targeted by broadcasters. (Autosport)

Ferrari's Sebastian Vettel, 29, says he "can't excuse" the Italian team's results this season - but the German insists they have "raised the bar" from last year. (Autosport)

Sauber's Felipe Nasr says it is "tough" and "sad" that the team have failed to register a point this season. (Formula1.com)

Red Bull pair Verstappen and Daniel Ricciardo embraced Mexican festival Día de los Muertos (The Day of the Dead) ahead of this weekend's Grand Prix in the country.

Winning in the US Grand Prix "let off steam" for reigning world champion Lewis Hamilton, 31, according to Mercedes team boos Toto Wolff. (Autosport)

Former world champion Jacques Villeneuve has welcomed the ban on moving under braking, describing it as "ridiculous". (Motorsport)

Sauber driver Marcus Ericsson, 26, says he would be "stupid" not to look at the possibility of joining Force India for 2017. (Autosport)

Manor's Indonesian reserve driver Rio Haryanto, 23, says he has a "50/50" chance of getting a drive for next season. (Motorsport)

Championship leader Nico Rosberg flew to Mexico with his rivals from other teams - but team-mate Lewis Hamilton travelled alone. 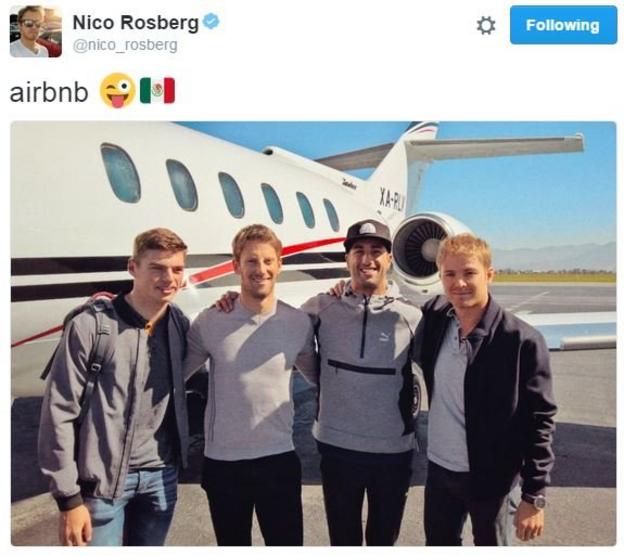 Mercedes team boss Toto Wolff is "really curious" to see how Nico Rosberg and Lewis Hamilton will respond to the pressure of their world title race. (F1i.com)

Jenson Button says McLaren did not show him their 2017 car until he signed a new two-year deal that involves taking a sabbatical next season. (Crash.net)

Sauber driver Marcus Ericsson says he would be "stupid" not to consider joining Force India for 2017. (Eurosport)

The "true McLaren" returned to action in the United States Grand Prix, according to the Formula 1 team's race director Eric Boullier. (Eurosport)

Red Bull's GP2 driver Pierre Gasly says he does not understand why he was overlooked for a Toro Rosso seat, and is now exploring alternatives to make his Formula 1 debut in 2017.(Autosport)

Sauber's Felipe Nasr has emerged as the one of the leading contenders for the Force India seat vacated by Nico Hulkenberg.(Planet F1)

Williams chief technical officer Pat Symonds was unhappy with the FIA's decision not to punish Fernando Alonso for a collision with Felipe Massa late on in Sunday's race. (F1i.com)

Renault driver Jolyon Palmer was disappointed that his team-mate Kevin Magnussen was not asked to move over for him with the pair challenging for the podium in Austin. (Autosport)

Felipe Massa, who missed out to Lewis Hamilton in the 2008 title race, believes that Nico Rosberg deserves to win the 2016 Formula One world championship more than the Briton. (F1today)