Lewis Hamilton says he "can't believe" he has moved level with Alain Prost in second place on the all-time Formula 1 winners' list.

Sunday's victory in Mexico was the world champion's 51st of his career. Seven-time champion Michael Schumacher is the record holder with 91.

Hamilton said: "It has all happened so quickly and it doesn't feel very real."

The Briton's interest in F1 was developed watching Prost's battles with his hero Ayrton Senna as a child.

"It is just very strange to think that growing up watching these guys and seeing their cars at McLaren and hoping one day I get to race and do something similar to them," he added.

"It is quite an honour to be up there." 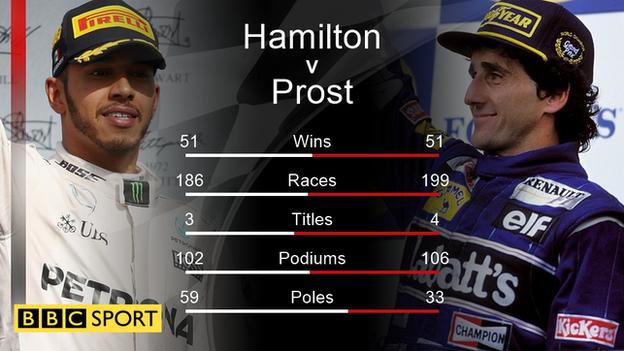 Hamilton's victory was his eighth of the season and his 30th since joining Mercedes for the 2013 season after spending the first six years of his career at McLaren, for whom Prost and Senna were driving when their duel was at its height.

The win reduced Hamilton's championship deficit to team-mate Nico Rosberg to 19 points, with 50 available in the two remaining races in Brazil on 13 November and Abu Dhabi on 27 November.

If Rosberg wins in Sao Paulo, the German will become champion regardless of where Hamilton finishes.

Rosberg can also afford to finish second and third even if Hamilton wins both races.

Hamilton, whose season has been hit by a series of reliability problems as well as bad starts, said: "I'm trying to claw it back.

"It is feeling pretty late this charge, but in the past it has shown it is never too late and that is why I have to keep on trying to do what I have done this weekend."

Rosberg said: "I am aware of that but it doesn't change anything for me.

"My approach is going to be the same - focus on Brazil and take it as one single race and for the win there just as I have done here.

"That's what feels best for me to perform as well as I can."