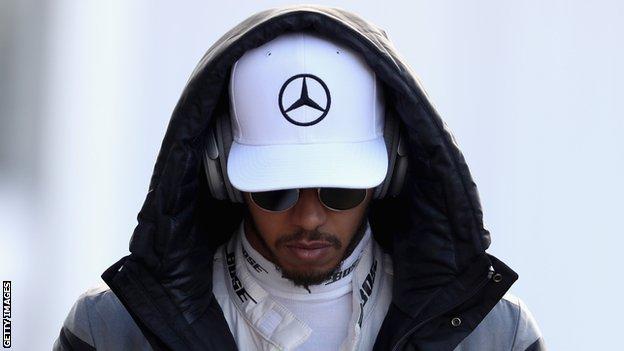 Lewis Hamilton is doing everything he can to keep his championship hopes alive.

What else can he do?

He has won the last two races from pole position and, had things gone slightly differently in Mexico last weekend, Hamilton might have got the break he needed.

A few centimetres either way and title rival Nico Rosberg's car might have been damaged in his collision with Red Bull's Max Verstappen at the first corner.

Rosberg will be champion if he wins the next race in Brazil. But it could yet turn around for Hamilton.

Rosberg is playing the calculated game, which is exactly the right thing to do. His job is to win the World Championship. And no-one in six months' time will remember or care whether he won it by finishing second in the last four grands prix.

Hamilton has had the worst of the luck with reliability at Mercedes, but equally he has let himself down with a couple of shaky weekends and some bad starts.

But you can point at problems Rosberg has had in free practice, or some of his weak races, such as Monaco.

Ultimately, whoever is champion deserves it. And if you win a world title by beating Hamilton in the same car in races, then you have not done a bad job.

When Hamilton is on his game, he has that little bit of an extra edge. But he is not always on his game, and that is what gives Rosberg hope.

And you have to say that, after being given a kicking last year, Rosberg has left no stone unturned in his pursuit of this year's title.

If Hamilton pulls this back from the position he is in, it will have been a masterful achievement. And Rosberg has to be careful at the next race in Brazil on 11-13 November.

Knowing he can be champion that weekend if he wins will make it all the harder for him to follow his one-race-at-a-time approach.

World championships are won and lost in the head. The closer the championship gets, the more nervy a driver becomes.

Rosberg does not have to attack - he knows he can take the cautious approach.

But I expect Red Bull to be pretty strong at Interlagos. Their Renault engine has improved a lot recently, and the car will be quick through the twisty middle sector.

Equally, Brazil often throws up a chaotic race, not least because the weather is so changeable.

It is the highest risk for Rosberg not to finish second or third, which he needs to do to stop Hamilton taking back control. A good example was 2012, when Sebastian Vettel was so nearly taken out in a first-lap collision, but survived and hung on to the championship by the skin of his teeth as his rival Fernando Alonso finished second but did not quite make up enough ground.

The controversies of Mexico

The Mexican Grand Prix ended in something close to farce. In more than 30 years in motorsport, I have never seen such a crazy situation as three people finishing third in an F1 race.

Verstappen crossed the line third but was demoted before he got to the podium. A frustrated Vettel went to the podium and therefore had to answer all the questions he did not want to be asked. And then he found out he, too, had been penalised and the guy who finished fifth, Verstappen's team-mate Daniel Ricciardo, was ultimately classified third.

It was a strange race, in that a manic first lap and crazy finish - produced by the various tyre strategies of Verstappen, Vettel and Ricciardo - bookended what was in between a pretty dull grand prix.

The series of controversial incidents during the race in Mexico City have led to a lot of discussion about Formula 1's rules and regulations in such circumstances.

Many people - including Verstappen himself - have pointed out what they see as a contradiction between the fact that race-winner Hamilton did not receive a penalty for cutting across the grass at Turns One and Two on the first lap, and that Verstappen did for doing it later in the race.

I have been an official driver steward at a number of grands prix. And the way the rules are operated - and all the drivers and teams know about this - there was no contradiction.

Firstly, the start and first lap are treated differently from the rest of the race. That's not to say you can get away with anything - as was proved when Carlos Sainz was penalised for pushing Fernando Alonso on to the grass - dirty driving is still dirty driving and will be punished.

But little incidents, details of driving, are tolerated that would not be during the main part of the race, simply because it's an inevitably more hectic environment with so many cars together at the same time.

On the first lap, Hamilton locked a wheel and ran wide at Turn One. He cut across the grass and rejoined in Turn Two.

There were several reasons why he was not given a penalty: it was the first lap, when there is more latitude; he was not fighting with anyone - he was clearly in the lead and the battle was for second behind him; and he lifted off as soon as he rejoined the track.

That was quick and clear thinking from Hamilton and it was crucial because the stewards work on the basis of a rule that dictates a driver must not gain a "lasting advantage" by going off the track.

The lock-up and flat spot meant Hamilton ended up in a risky situation - it means big vibrations that not only shake the driver around but also risk breaking the suspension.

This famously happened to Kimi Raikkonen at the Nurburgring in 2005. He led much of the way, ran a long time on a tyre with a flat-spot on it, and the suspension shattered on the very last lap of the race.

Verstappen v Vettel at Turn One

Verstappen fitted his medium tyres to take him to the end of the race on lap 12, whereas Vettel did not stop until lap 33 - so had tyres with 21 laps less wear on them.

Coming up behind them was Ricciardo, who fitted new soft tyres on lap 51, with only 20 laps to go.

On old medium tyres, it is easier to lose tyre temperature on long straights, which was almost certainly a contributing factor to Verstappen locking up at the start of lap 68.

He went off the track and across the grass within half a metre or so of the line Hamilton had been on at the start.

Could he have got the car back on to the track? Almost certainly. But he would have lost at least one position to Vettel and probably another to Ricciardo as well.

The problem was that going across the grass meant he gained and kept a lasting advantage as opposed to losing one. Hence the penalty.

Verstappen's refusal to give the place to Vettel set up Ricciardo's attack on the German on the penultimate lap, as the Ferrari was being held back to the Dutchman's pace.

Ricciardo got a good run on Vettel out of Turn Two and I was surprised that Vettel did not move to the inside earlier to cover and try to send him around the outside - especially as he said afterwards he knows Ricciardo will often have an "optimistic" attempt, without question or hesitancy.

That gave Ricciardo a chance to have a go down the inside and he went for it at the exact moment they were coming into the braking area.

Vettel started to close the space in the braking area. This is something that has been discussed at a lot of drivers' briefings this season, predominantly in the context of Verstappen's driving.

A new clarification was brought out at the US Grand Prix, the week before Mexico, spelling out what was acceptable in this area.

The FIA said drivers' could not make any change in direction in the braking area that led to another driver having to take evasive action.

Why is this area so sensitive? Think back to the Australian Grand Prix at the start of the season. There, owing to a misunderstanding in the braking area, Fernando Alonso's McLaren was launched over Esteban Gutierrez's Haas into an almighty accident.

Those are the risks of moving in the braking area.

So it was hardly surprising that the move was investigated and Vettel ended up being penalised.

The stewards did well to give Verstappen his penalty early enough before the podium ceremony; it was just a shame they could not manage that in time to get Ricciardo up on to the podium.

Vettel has escaped sanction for the expletive-laden tirade he launched over the radio in the race.

But he has to bear in mind that he now has six penalty points on his licence - and if any driver gets 12 in any 12-month period, that is an automatic one-race ban.

The Vettel we are seeing now - both in and out of the car - is not the same man who won four consecutive world titles with Red Bull, or even who won three races for Ferrari last year.

Ferrari came into this season expecting to challenge Mercedes, but it has been a disappointing year, with questionable strategy and technical errors.

It looked for a while as if Vettel might win the opening race of the season in Australia, only for the team to make a bad strategic call when the race was stopped for Alonso's accident. Another potential victory went begging in Canada for similar reasons.

They have been leapfrogged by Red Bull - Vettel's former team - and only at seven of the 19 races so far this year has Ferrari's gap to pole position been closer than it was in 2015.

It has become a very frustrating season and there is no question there is a lot of pressure on that team.

Emotions are running high, and you can hear it in Vettel's radio messages, about slower drivers, blue flags, people blocking him - all expressed in the manner of someone who is very frustrated.

His comments about FIA F1 director Charlie Whiting - even though they were rooted in the fact that he felt no action was being taken about Verstappen, whose driving Vettel has been unhappy with on a number of occasions this year - are the ones that really caused an uproar.

When you're in the car, the emotions run high. Your brain is processing things at 200mph and all the energy and adrenalin means these things can bubble out.

I've done it as well. I remember in one race I was complaining about something and my engineer came back and said: "Allan, keep calm." The exact words Ferrari team boss Maurizio Arrivabene said to Vettel on Sunday. And I replied: " I am ******* calm!" Clearly, I wasn't.

The bizarre thing about it all is that Vettel was voted driver of the day by the fans, and I suspect it was at least as much to do with his outpouring of emotion as it was for his driving.

So, fine, warn Vettel about certain aspects of his behaviour. But the fans connect to the emotions and action involved, and F1 needs to be aware of that.