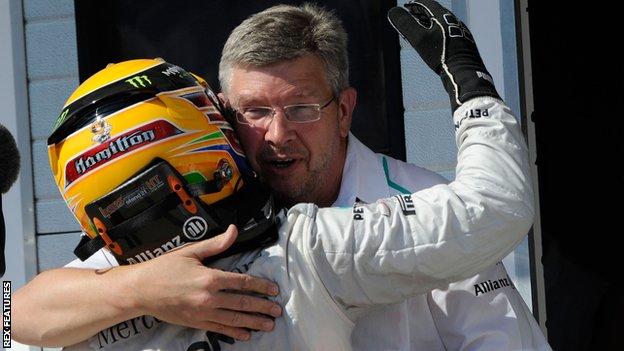 Ross Brawn says he would be happy to work alongside Formula 1 boss Bernie Ecclestone if he was offered a job running the sport.

The former Mercedes F1 boss denies having a formal job with new owners Liberty Media but admits he is interested in the possibility.

Brawn was talking in a wide-ranging interview with BBC Sport, in which he also discussed...

Brawn, 61, has had a fractious relationship with Ecclestone, 86.

"It would be a very interesting combination and it certainly wouldn't be a problem for me," said Brawn.

Brawn said he expected Liberty Media, which is in the process of finalising a $4bn (£3.2bn) deal to take a controlling stake in the commercial arm of F1, to take its time before deciding how the sport's management should change.

"When the day comes that Bernie eventually stops there won't be another Bernie," he said. "It will be a different structure and with Liberty Media getting involved there is speculation about how things will evolve.

"My role has solely been to give some consultancy to Liberty and help them to understand F1 and the business of F1 and the characters of F1 and just give them a bit of support in that respect.

"I don't want to go back to being in charge of a team. That doesn't really motivate me.

"But what could motivate me is contributing some way to the future of F1 and how it can progress and meet the challenges it is facing today and that could be any number of roles.

"But Bernie is the ring master and he is the one who is going to decide how things play out in the next few years."

Brawn said parting with Ecclestone, who has run the sport for 40 years, would be a "brave move" from Liberty.

He added: "He has established the systems, negotiated all the contracts. He has done any number of things. So it would be sensible to proceed cautiously in that direction."

Brawn and Ecclestone clashed both when the former was boss of his own eponymous team and at Mercedes.

Brawn said: "The relationships are vital in any business. But I understand Bernie and I didn't make enough effort during that period to perhaps give him the respect that was due. He has achieved an enormous amount in F1."

Brawn is one of the few people with an insight into the condition of Schumacher, who is recovering from serious head injuries sustained in a skiing accident in 2013.

It was revealed at a court case in Germany in September that Schumacher cannot walk but the extent of his condition remains unknown to the public.

Brawn, who worked with Schumacher on all seven of his world titles, said: "The family have chosen to conduct Michael's convalescence in private and I must respect that.

"There are encouraging signs and we are all praying every day that we see more of them. So it is difficult for me to say very much and respect the family's privacy.

"All I would say is there is a lot of speculation about Michael's condition. Most of it's wrong and we just pray and hope every day that we continue to see some progress and that one day we can see Michael out and about and recovered form his terrible injuries."

Brawn laid the foundations for Mercedes' success when he was team boss from 2010-13, after the German company bought his Brawn team.

But he left at the end of 2013 following the introduction of a new management structure.

Brawn says it was Mercedes' recruitment of Paddy Lowe in the new role of executive director (technical) in January 2013 that was the final straw.

"The Paddy thing, in retrospect for all the people involved, was a bit unfortunate," he said. "I found out from [then McLaren team boss] Martin Whitmarsh that Paddy Lowe was joining Mercedes and that for me was unacceptable.

"That was the crunch for me when I thought: 'Maybe I have created this situation and I have to blame myself but still that's not something I am going to find very easy to live with.'

"And the board took that as a message from me the I wasn't going to stick around. So I provoked some of the reaction that came. I blame myself for a large part of it.

"But once you have reached that stage when someone has been employed that you didn't know was coming, it's difficult to forget that."

Brawn says he takes "huge satisfaction" from the three consecutive title doubles Mercedes have achieved, and praises Toto Wolff and Lowe for "not dropping the ball - even though the team structure was there, they had to keep the consistency and improve it".

The 2016 championship will be won by either Nico Rosberg or Lewis Hamilton - both of whom were recruited by Brawn - over the final two races of the season.

Rosberg has a 19-point lead and will be champion if he wins in Brazil on 13 November.

Brawn says the German would be "a completely worthy champion" if that happened, regardless of the fact Hamilton would be leading at this stage had he not suffered worse reliability this season.

"The great thing about this year is that whatever driver wins it they will have deserved it," Brawn said. "We can talk about the reliability record but reliability comes and goes for every driver every year and you have to accept that's an unfortunate part of the business.

"Only for emotional reasons I would love Nico to win it because he is such a tough little nut. He has been bashed around so much by Lewis.

"Lewis is naturally talented, a better driver, he is slightly quicker than Nico. But Nico is so tenacious and has such good application that he is compensating for it."

Brawn's career is most synonymous with Ferrari, where working with Schumacher he won five consecutive drivers' titles and six constructors' titles.

After 10 years at Maranello, Brawn has a strong perspective on where Ferrari have gone wrong as their form has slipped in recent years.

He said: "It just needs to stabilise and work progressively and try to defuse a little bit of the pressure that is always on Ferrari from the media and the fans.

Brawn said it was "a great shame" technical director James Allison had left in the summer.

He added he felt it would be better if Ferrari president Sergio Marchionne was not taking such a close involvement with the team, which was not the case when Brawn was there under Luca di Montezemolo.

"It is a different approach to the one I would take," he said.

"If there is a vacuum in the middle, I guess people jump into it. If there is no structure there to give the confidence to senior management that the team is being handled properly then people's tendency is to get involved themselves.

"The great thing about Luca is he wanted to know what was going on and he was a very passionate person but he always kept his distance because he had the confidence we were doing then right things.

"I would prefer Sergio not to be doing that but I think he's doing it because he doesn't see an alternative. That is the natural consequence of a vacuum in the middle."