More than 900 Formula 1 races have been held since 1950, yet very few are rooted in the collective consciousness of fans.

Mention these grands prix to F1 devotees and they will nod approvingly, because these were occasions when a driver delivered something remarkable that marked him out as a cut above his peers.

In the case of Brazil 2016, we may well have another entry to that list - and the man responsible was a 19-year-old named Max Verstappen.

"We witnessed something very special," Red Bull team boss Christian Horner said of his driver. "The way he drove was outstanding. It stands out to me like Ayrton Senna in Monaco and other great drives in history."

High praise indeed for a man occupying the third step of a podium.

What was so great about this drive?

Verstappen dropped to 16th after a pit stop with 16 laps to go but fought back to finish on the podium in treacherous wet conditions.

Yet his drive was about more than this late climb through the field.

He also overtook Ferrari's Kimi Raikkonen early on and produced a superb pass on Mercedes' Nico Rosberg to take second place midway through the race.

He would have finished there, behind winner Lewis Hamilton, had Red Bull not put him on intermediate tyres at a crucial point. The decision turned out to be an error and Verstappen had to pit again for extreme wet tyres, prompting his climb back.

He also rescued a huge spin on the pit straight, preventing the car from hitting the wall and managing to hold on to second. He said it was "50-50" between skill and luck.

Horner said: "His move earlier in the race on Rosberg was brave, skilful and totally courageous and later in the race the inter tyre looked like the tyre to be on.

"We could see others starting to go quicker and we took the gamble and then the rain just intensified slightly, particularly around Turn 12. We had to abort that and fit a new set of extreme and then it was over to Max."

How did Verstappen's late charge play out?

Verstappen looked completely out of the picture when he pitted under the safety car for extreme wet tyres late on. But Red Bull knew what their man was capable of, and so did he.

"Can you make your way through the field on full wets?" came the question from the pit wall. Verstappen said he could and dived in for fresh boots.

What followed was hugely impressive, to say the least.

The midfield runners were swiftly dispatched and, within a couple of laps, Verstappen was up to 12th place. That became 11th when he passed the Williams of Valtteri Bottas, while team-mate Daniel Ricciardo had no answer either as the teenager moved back into the points.

Daniil Kvyat was next, then Esteban Ocon's Manor and the Sauber of Felipe Nasr.

Nico Hulkenberg? No problem. Sebastian Vettel? Done in a few corners. Verstappen even rudely ran the Ferrari off the track for good measure.

Carlos Sainz was his next victim as he moved into fourth, and then came the podium-clinching move on Sergio Perez - a gutsy, around-the-outside pass at Turn 10 that he completed in Turn 11 having corrected a big slide on his way through.

The Mercedes were too far up the road to do anything about, but Verstappen had made his point. Thirteen places made up in 16 laps. Job done.

"It was a lot of fun, with some scary moments," Verstappen said. "I was a bit disappointed after the last pit stop, but I kept my head down and just kept pushing and I went for it. To come back on to the podium was amazing. 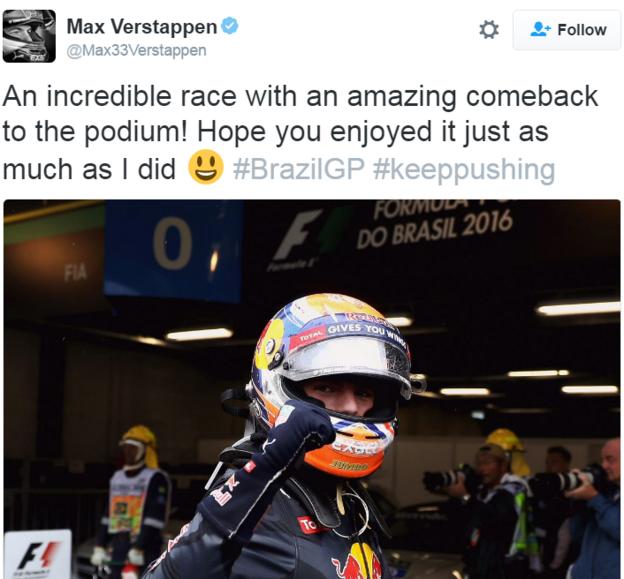 "It was crazy. I thought 'now my race is over'. But the car was great. We had great grip. All the race we had good pace. We could have definitely fought for second but to come back in such a style is also a lot of fun."

Verstappen said it was "one of" his best races and his "best ever" in the wet. But he said that his win in the Spanish Grand Prix in May would have a bigger place in his heart.

Nico Rosberg on Verstappen's amazing half-spin: "I arrived in the straight and saw him pointing 90 degrees towards the wall - I was thinking, 'what the hell?!'"

Jos Verstappen, Max's father, who started 106 Formula 1 races: "I have never seen something like this, he has surprised even me. I have seen many races he did, but today it was incredible. He did himself proud. It is what we want to see more of in F1."

Mercedes team boss Toto Wolf: "It was the Verstappen show. It was really unbelievable driving, great entertainment. Physics are being redefined."

Mercedes non-executive chairman Niki Lauda: "Verstappen was outstanding, the way he passed everybody so it was an interesting race. I knew the guy is good but he proved to everybody what he can do."

Horatio McSherry: Max Verstappen is driving like a man possessed. Utterly extraordinary. One of the greatest drives I've seen in nearly 30 years of F1.

Lauren McCarthy: This driving by Verstappen is simply ridiculous. How on earth is he 19, absolute genius. 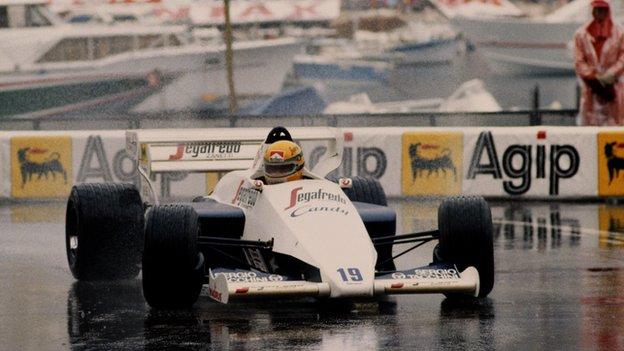 A race remembered as the moment Ayrton Senna truly announced his arrival in the sport.

Starting 13th on the grid, the Brazilian, in only his sixth F1 race, came through the field in atrocious wet conditions, passing established front-runners to sit second behind Alain Prost's McLaren when the race was brought to a premature halt on lap 31.

It was just a second place and only half points were awarded, but a statement had been emphatically made. F1 had a new star. Fast-forward nine years and Senna was at it again.

By now his reputation as master of wet conditions was legendary, but even so his charge from fifth to first place on the opening lap at Donington had jaws on the floor.

It is routinely held up as the best single-lap performance in the history of the sport - and to back it up he won the race by over a minute from second-placed Damon Hill, and by a lap from great rival Prost. 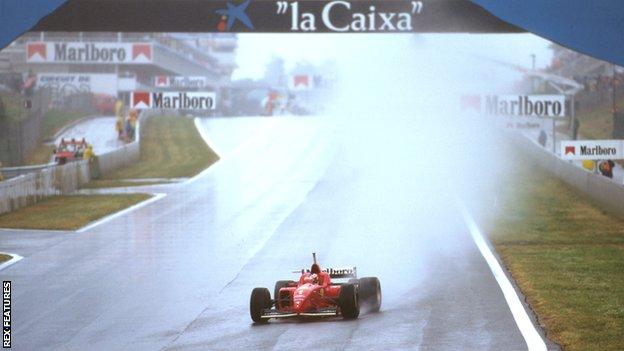 The drive that gave Michael Schumacher his first Ferrari win and earned him the reputation as a legend in the wet.

Just two weeks earlier he had slid out of the lead on the first lap at a wet Monaco, but in Barcelona - with the rain pounding down once again - he delivered one his most celebrated drives.

The Ferrari was a long way from the best car in the field, but on this day and in Schumacher's hands it was peerless. He took the chequered flag by 45 seconds from Jean Alesi. 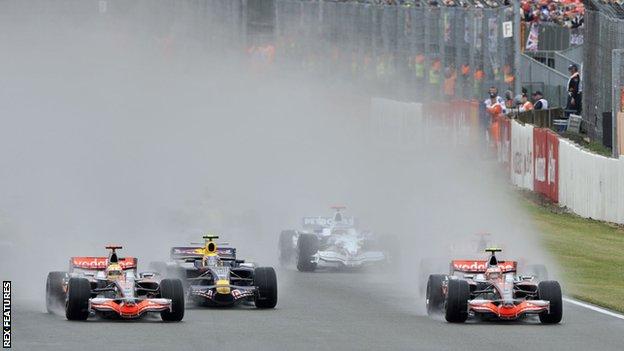 We knew Lewis Hamilton was good by midway through 2008, but maybe it took this race to tell us just how good.

Hamilton trailed Ferrari's Felipe Massa in the drivers' championship heading into the ninth race of the season, and the two could not have had more contrasting fortunes on this soggy Silverstone day.

Massa spun five times en route to a miserable 13th place, two laps down on race winner Hamilton, who judged the conditions to perfection, keeping the car on the island and winning by more than a minute from the chasing pack.

Come season's end, he would be champion by a point from Massa, and this was arguably the race where the tide turned. 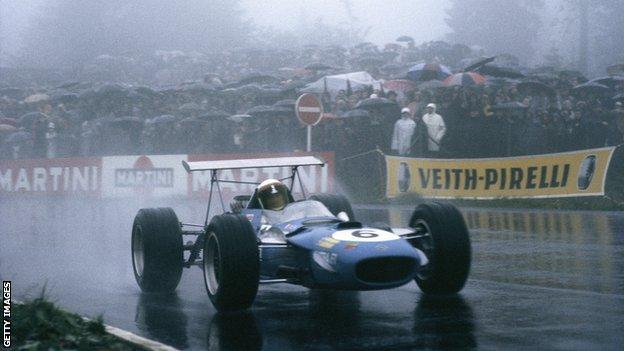 A truly startling drive from a man who in a few short years would retire from Formula 1 as a three-time world champion.

On 4 August 1968, Jackie Stewart had no world titles and just two wins to his name, but by the end of the day the sport had a new superstar.

In wet and foggy conditions at the unforgiving 14-mile Nurburgring, and sporting a broken wrist, Stewart produced a performance of immense skill and bravery to win by four minutes from Graham Hill.

Stewart later described it as "a tremendously satisfying race to win, but I was very pleased to get it over with".