After the rawness and drama of Brazil, it is a shame in some ways for the Formula 1 World Championship to be decided in the rather more sterile surroundings of Abu Dhabi.

It is all relative, of course. No F1 grand prix is without challenge and jeopardy. But Yas Marina's large run-off areas, dearth of challenging corners, manicured backdrop and predictable weather are a world away from the intensity of Interlagos.

It looks lovely on television, with its painted borders and the shimmering Yas Viceroy hotel, the race start held at sunset, and the cars glimmering under lights.

But the track itself? Well, this is what Ferrari driver Kimi Raikkonen said when he first experienced it in 2009: "The first few turns are quite good, but the rest of it is rubbish." Except he used a ruder word than rubbish.

It is a pleasant enough weekend. Everything works. The weather is nice, especially when the sun has gone down. But as a race track, it is unremarkable.

This seems a shame, given that it was built virtually with cost no object. Why spend all that money to come up with something so… mundane? 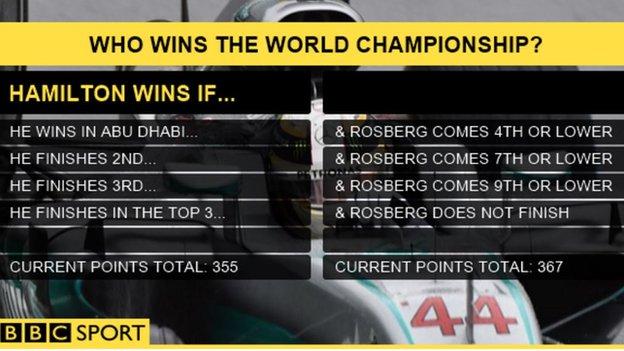 Hamilton can only hope

This is the third time in its eight years in F1 that Abu Dhabi will host the championship showdown and on the face of it, it is hard to see how Nico Rosberg cannot end the weekend with his first title.

His Mercedes team-mate Lewis Hamilton excels in Abu Dhabi, especially in the last sector, where the sequence of right-angled corners fit perfectly with the way he brakes late and rotates the car into the corner using a combination of oversteer and impeccable feel and skill.

But to take a fourth title, Hamilton has to win the race and hope Rosberg finishes lower than third.

And on a track on which it is hard to see how any other team can challenge Mercedes, that will almost certainly take a mechanical failure. And the German, unlike Hamilton, has not had one of those all season.

Rosberg goes to the final race of the season in Abu Dhabi on 25-27 November with a 12-point lead over Hamilton.

In pure mathematical terms, it is very difficult for Hamilton to take the title - he has to win with Rosberg lower than third.

Hamilton will go all out for the race win, and I think he will do it.

Rosberg will play the percentage game, because that is the right thing to do. There is no point taking any unnecessary risks, the risky race was Brazil.

But it is the final race, and you never quite know what will happen.

We have seen Abu Dhabi throw up a curve ball before - in 2010, when Fernando Alonso and Mark Webber were the top two in the championship and Ferrari focused so much on Webber that they let Sebastian Vettel get into a position to win the race and the title.

It is a different situation this year. There is no third contender, it won't rain and the circuit will suit Mercedes. So the race is between Hamilton and Rosberg.

But reliability and bad starts have played a role on a number of occasions this year.

Mainly, that has affected Hamilton but that's not to say that a last twist of the tale could not be in the other direction. 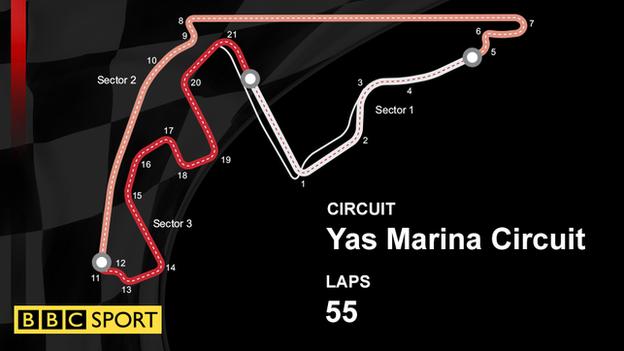