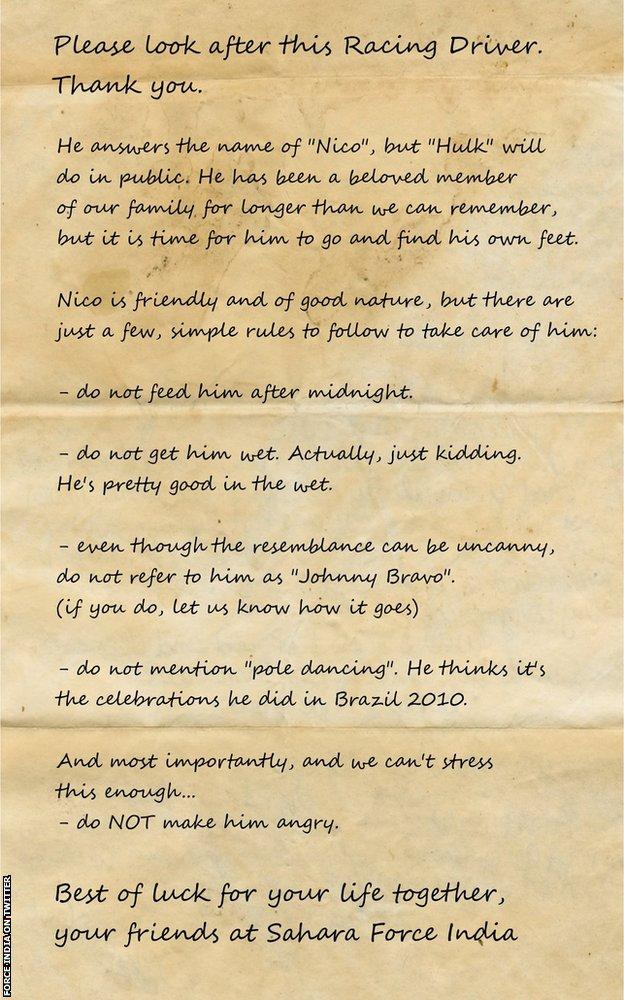 Nico Hulkenberg will switch from Force India to Renault during 2017 and his former team have tweeted a letter they have sent to his new employers about taking care of the German.

McLaren have denied reports that Mercedes technical director Paddy Lowe is set to leave the constructors' champions and return to them. (GrandPrix.com)

Liberty Media will hold a meeting in January and vote on various elements of its deal to purchase of Formula 1. (Autosport)

Red Bull racer Max Verstappen says he doesn't "care about other opinions" after having been criticised for his driving style during the 2016 season. (Planet F1)

Retired F1 driver Jenson Button wrote on Instagram that he would now like to be referred to as Doctor Button after receiving an honorary degree in engineering from the University of Bath.

F1 supremo Bernie Ecclestone says Rosberg will not be remembered as a legend of the sport and that he "would just call Nico a world champion and nothing else". (Hindustan Times)

Red Bull boss Christian Horner expects the continued development of the Renault engine to help the team narrow the gap on Mercedes. (ESPN) 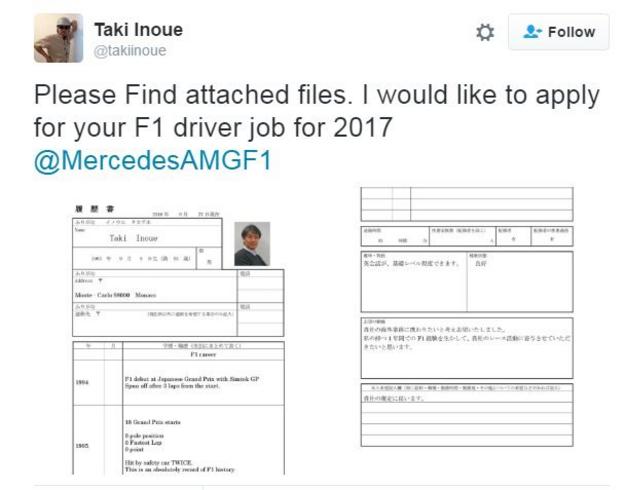 Hapless 1990s F1 driver Taki Inoue responded to Mercedes' tongue-in-cheek job advert for a new driver by sending his CV to the team on Twitter. The Japanese lists spinning off three laps into his F1 debut and being "hit by the safety car TWICE" among his stellar achievements.

The man Inoue has designs on replacing at Mercedes, new world champion Nico Rosberg, has also been on Twitter to post his thanks to team boss Toto Wolff. 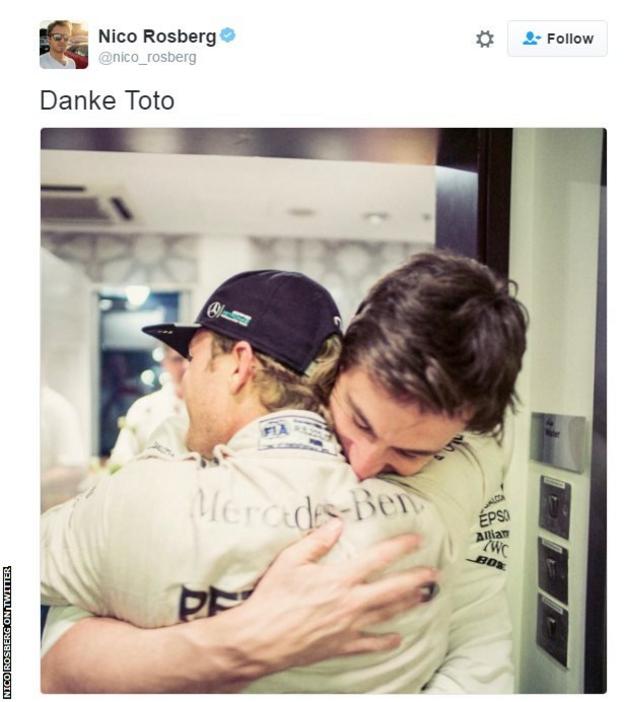 Meanwhile, Rosberg has dismissed claims he could make a comeback in the future, after ex-F1 driver Gerhard Berger said he would get "bored" in retirement. (f1today.net)

Sebastian Vettel believes Ferrari should have beaten Red Bull to second in the 2016 Formula 1 constructors' championship because they had the stronger package. (Autosport)

Team boss Christian Horner believes Red Bull's engine supplier Renault has the potential to close the gap to Mercedes to a manageable amount next year. (ESPN)

Sergio Perez has thrived through having Nico Hulkenberg as a Formula 1 team-mate, according to Force India deputy team principal Bob Fernley. (Autosport)

Esteban Ocon has not been approached to fill the driver's position vacated by Rosberg. The Force India driver has been one of many names linked with a move to the constructor but Force India chief operating officer Otmar Szafnauer believes Mercedes boss Toto Wolf could do worse than recruit Jenson Button. (Sky Sports)

Wolff is not yet ready to draw a line under Lewis Hamilton's driving in the closing stages of the final race of the season and could impose sanctions on the 2015 World Champion. Hamilton deliberately slowed down as he led the race in the hope other drivers would catch Nico Rosberg. (Autoweek)

Felipe Nasr has indicated he will wait for clarity regarding his future in F1. The Brazilian looked set to lose his place at Sauber for 2017 to Pascal Wehrlein but the German is now in the frame to replace Nico Rosberg at Mercedes. (F1 Today)

Toro Rosso driver Daniil Kvyat has called for a driver vote on the 'halo' in order to provide governing body the FIA with a clear answer over feelings up and down the Formula 1 grid. The halo is the FIA's preferred cockpit protection device. (GP Update)

MotoGP racer Valentino Rossi has surprisingly put his name forward to replace Nico Rosberg at Mercedes, saying "how could I say no?".(Autoweek)

Pascal Wehrlein says he does not want to annoy Mercedes by pestering the Formula 1 team about Rosberg's vacant 2017 seat, but insists he is ready to step up. (Autosport)

McLaren's new executive director Zak Brown says the team are adamant Fernando Alonso will not move to Mercedes for next season.(SkySports)

Tavo Hellmund, the man who helped resurrect the USA and Mexican grands prix, has emerged as the favourite to complete a takeover of the Manor team. (Motorsport)

Red Bull advisor Helmut Marko says the team are convinced they will be on the lead pace next season and fight for both the drivers' and constructors' titles.(Formula1.com)