Lewis Hamilton's victory in Shanghai last weekend ignited the battle at the top of the 2017 drivers' standings.

Sebastian Vettel followed up his win in Australia with second place, giving the multiple world champions 43 points each.

Will the battle in Bahrain come down to a straight fight between the two, or will a rapid 19-year-old Dutchman by the name of Max Verstappen make it a three-horse race?

Bahrain - is it just sand?

Well, there is a good reason this race now takes place at night...

Bahrain by day is very warm, very dry and pretty devoid of atmosphere.

The track is in the middle of the desert, about a 40-minute drive from the country's capital city, Manama.

That means the racetrack is one of the dustiest anywhere on the Formula 1 calendar, despite the organisers' best attempts to 'glue' the sand down - no, really.

No need to check the forecast for this one - it's going to be dry. It always is.

But the course is hard on the brakes - high-speed straights (the longest over a kilometre) lead up to tight hairpins and provide a great opportunity for the crowd-pleasing sparks to make their first appearance of 2017. 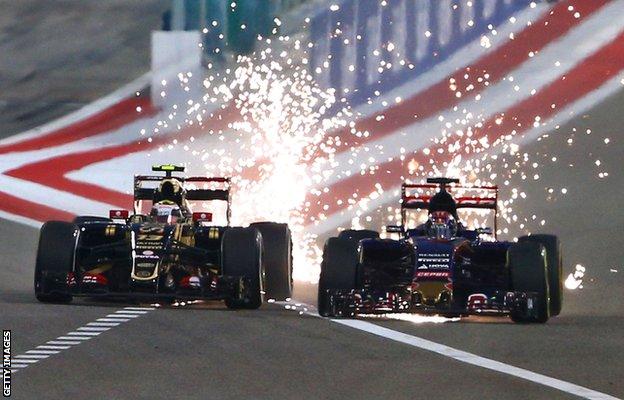 It could be a good weekend for...

Hamilton and Mercedes. Again. With no Nico Rosberg to squabble with this season, it could be easy street for the Briton this year, especially with new team-mate Valtteri Bottas so far not proving up to the challenge of the three-time champion.

But it would be wrong to think Hamilton will have everything his own way given the pace of Ferrari, and Vettel in particular.

Speaking after the Chinese Grand Prix, Hamilton told reporters he is loving the fight with the four-time world champion.

"He is performing at his best - he is rapid out there - so when I am able to get ahead it is a compliment and vice-versa," he said.

It promises to be an exciting weekend.

It could be a bad weekend for...

Sorry to say it, but McLaren-Honda - again.

A double retirement in China showed how uncompetitive the 2017 car is despite Fernando Alonso's impressive opening lap.

"It will be another challenging race for us" said the Spaniard.

"The long straights don't make it easy and there's a lot for the engineers to work on.

"Brake wear and fuel consumption is high, and set-up is tricky as the track temperatures change a lot during the weekend, as we race later into the evening compared to the usual schedule."

All times BST. Times are subject to change. The BBC is not responsible for any changes that may be made.