During the two days of in-season testing in Bahrain, Ferrari's Sebastian Vettel completed the most laps overall.

But Mercedes' Valtteri Bottas was quicker than Vettel on the final day, posting a lap time of 1:31.280 - 0.294 seconds quicker than the German. (Autosport)

Meanwhile, Stoffel Vandoorne finally gave McLaren something to smile about with the fourth fastest time with a late lap in the closing minutes. (MailOnline)

Racing director Eric Boullier has insisted that Vandoorne is "not under pressure" amid McLaren-Honda's current performance crisis. (SportsMole)

Frenchman Pierre Gasly stood in for Daniel Ricciardo on the final day of testing for Red Bull. The 21-year-old said the test day was a 'mega experience'. (F1i.com)

Renault are celebrating 40 years in F1 and to mark the occasion have revealed a 1,300bhp concept car for 2027. The French manufacturer says F1 a decade from now will be a "more human-centric championship with drivers at the heart of the sport". Make of that what you will. (F1 Fanatic)

Felipe Massa says he has "no problem" with Max Verstappen following the row over the Red Bull driver's joke about Brazilians over the Bahrain Grand Prix weekend. (Autosport)

Verstappen ruffled a few more feathers in Bahrain - chief among which was a Dutch TV anchor who was interrupted by the 19-year-old while he recorded a piece to camera. (Wheels24.co.za)

Williams rookie Lance Stroll says he cannot afford to let himself dwell on his hat-trick of retirements in 2017, which have left him as the driver with the fewest completed racing laps so far. (Motorsport.com)

Ferrari have denied claims their car is more suited to the driving style of Sebastian Vettel, in response to the struggles experienced by the German's team-mate Kimi Raikkonen. (Grandprix.com)

McLaren chief executive Zak Brown is confident the team can keep Fernando Alonso for the 2018 season, providing they can give him a competitive car. (Sky Sports)

Red Bull driver Max Verstappen has apologised to the people of Brazil for remarks he made about Williams' Felipe Massa after qualifying for the Bahrain Grand Prix. (ESPN)

Sauber driver Pascal Wehrlein has revealed the extent of the back injury that kept him out of the first two races of the season: 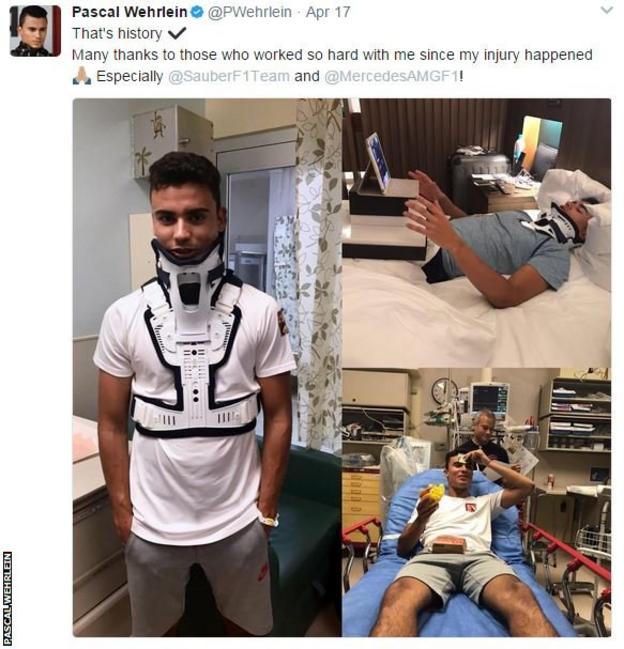 Lewis Hamilton was ordered to take down an on-board video clip from social media because it broke guidelines set out by F1's new owners, Liberty Media. (Daily Mail)

Lewis Hamilton says he "does not exist to finish second" after the Mercedes driver was beaten by Ferrari's Sebastian Vettel in the Bahrain Grand Prix. (Independent)

Valtteri Bottas admits it was tough being asked to move aside twice for Mercedes team-mate Hamilton during Sunday's race. (Formula1.com)

Red Bull's Daniel Ricciardo was not impressed by Hamilton's decision to deliberately slow him as they pitted in Bahrain, which resulted in a five-second penalty for the Mercedes driver. (Channel 4, via Crash.net)