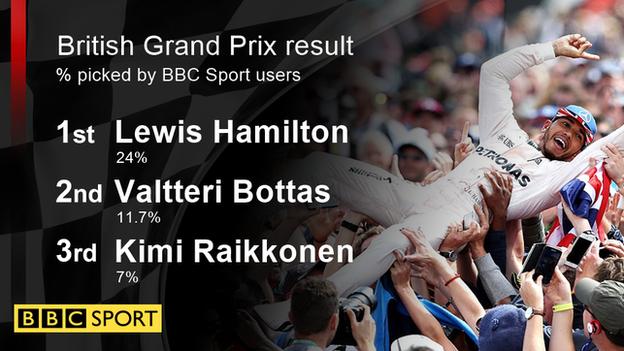 When it comes to Formula 1, you lot know your onions.

We've asked BBC Sport readers to predict the top three before every race this season and, after the British Grand Prix, we got our calculators out and had a look at how many people got the top three bang on.

The vast majority of you were on the money when it came to predicting the top two. Lewis Hamilton was top of the pile for 24% of BBC Sport's predictor users with Valtteri Bottas picked to finish second more than any other driver.

However, third place caught a few of you by surprise.

Sebastian Vettel was picked more times to finish third (7.5%) than any other driver but it was his Ferrari team-mate who snatched the final place on the podium. Seven percent of BBC Sport predictor users correctly predicted Kimi Raikkonen's third-place finish.

Clearly there are some optimistic - or mischievous - McLaren fans out there as well.

Fernando Alonso, who has not won a race in four years, was backed to win the British Grand Prix by 0.3% of predictor users.

Fancy channelling you inner Nostradamus? Then head here to predict the qualifying top 10 for the Hungarian Grand Prix.