The Australian, whose car has a major aerodynamic update, was 0.234 seconds quicker than Ferrari's Kimi Raikkonen.

Title rivals Lewis Hamilton and Sebastian Vettel were third and sixth, Hamilton 0.7secs quicker than Vettel and 0.372secs behind Ricciardo.

Hamilton, who has won five times in 10 years in Hungary, trails Vettel by one point at the mid-point of the season.

Hamilton was 0.4secs quicker than team-mate Valtteri Bottas, who was fifth behind the second Red Bull of Max Verstappen, and 0.6secs off Ricciardo, struggling with his set-up.

Vettel also appeared to be struggling. The four-time champion was a second off the pace, complained of a lack of rear grip and had a spin and a number of moments when he ran wide and off track.

He was not the only one to fall prey to the slippery surface at the Hungaroring.

Both Haas drivers crashed at the fast Turn 11, Romain Grosjean incurring only light damage, but reserve driver Antonio Giovinazzi bringing out a red flag when he buried his car in the wall, damaging the left-hand side.

And at the end of the session, Renault's Jolyon Palmer lost control at the exit of the fast uphill kink at Turn Four, bouncing over the kerbs and smashing his front wing to pieces.

Palmer finished the session in an encouraging 10th, just one place and 0.3secs behind team-mate Nico Hulkenberg on a weekend when he is under pressure. Former F1 driver Robert Kubica will test with Renault at this track next week as the team assess whether the Pole is capable of returning to the sport more than six years after a horrific rally crash left him with only partial use of his right arm.

It was not immediately clear whether Palmer had damaged the new floor that was introduced for the first time at the last race and which he was using for the first time. Plus, if he had, whether Renault had sufficient spares to fit a new one.

McLaren lived up to their promise to perform better than usual in Hungary because of the relative unimportance of engine power at the track, with Fernando Alonso and Stoffel Vandoorne best of the rest in seventh and eighth places. 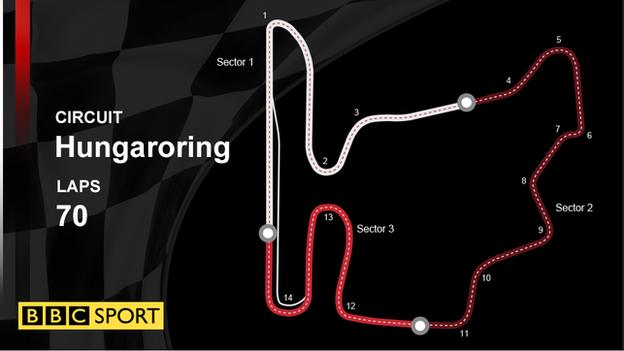