The Australian, running an aerodynamic upgrade, was fastest in both sessions, heading Ferrari's Sebastian Vettel by 0.183 seconds in the afternoon.

Lewis Hamilton, trailing Vettel by a point at the top of the championship, was struggling for grip on the fastest super-soft tyres and down in fifth.

But the Mercedes driver was quickest of all on soft tyres early in the session. 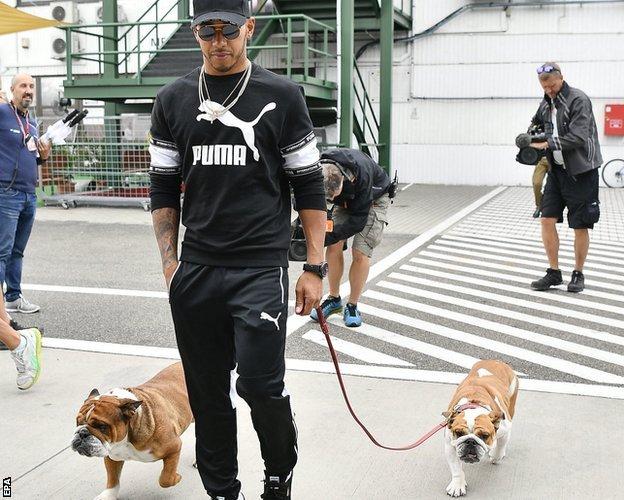 Nevertheless, Hamilton did appear to be struggling in the second session. Mercedes said he lacked grip on his qualifying-simulation run on the super-softs and was also off the pace on his race-fuel laps later on.

"It is very close between the top three teams," said Hamilton. "Today has been really gusty. I got out but I just didn't finish the laps on the super-soft tyre."

"Good day, can't complain," said Ricciardo. "It's nice. We brought some updates here and they seem to be working. I do feel like we have gained some grip in the car and I definitely feel we've taken a step in the right direction."

Hamilton's team-mate Valtteri Bottas was third fastest overall, 0.2secs off Ricciardo's ultimate pace and 0.1secs ahead of the second Ferrari of Kimi Raikkonen.

Bottas was quickest on the race runs on the soft tyres but Ricciardo led the way on heavy fuel on the super-soft tyre.

The session was stopped twice because of accidents involving Sauber's Pascal Wehrlein and Renault's Jolyon Palmer.

Wehrlein suffered a heavy crash at Turn 11. The German was taken to the medical centre for a routine check and given the all-clear.

Palmer crashed shortly after the session was restarted, losing the rear on the entry to the final corner and sliding into the barriers.

The Englishman is under pressure for his drive. Renault have been considering for some time whether to replace him, and on Wednesday former F1 driver Robert Kubica is testing for them at this track.

The team are seeking to establish whether the Pole can make a comeback to F1 despite only partial movement in his right arm following a rally crash that curtailed his career in 2011.