Formula 1 reconvenes after its summer break at Belgium's magnificent Spa-Francorchamps track this weekend with the season finely poised - on many different levels.

On the face of it, this race and the one a week later on the equally historic Monza track in Italy gives Lewis Hamilton a chance to gain back some ground on Ferrari's Sebastian Vettel in the championship, after the German's carefully controlled victory in Hungary at the end of July.

And there are a number of other pressing matters - particularly the resolution of the 2018 driver market and McLaren's engine supply - that will guarantee an intriguing few weeks as a backdrop to the title fight.

With four wins each so far in 11 races, it is hard to pick a favourite out of Vettel and Hamilton, at least when it comes to a potential champion.

This weekend at Spa, though, might be a different matter. Although Mercedes and Ferrari have generally been closely matched this season, there have been outlier tracks where one has had a bigger advantage than normal, and the 4.3 miles of magnificent asphalt that swoops around the Ardennes mountains is expected to be one of them.

With a collection of largely long-duration, medium- and high-speed corners, Spa could have been made for the standard-setting aerodynamic efficiency and horsepower of this year's Mercedes car - in much the same way as one could have said of Silverstone, where Hamilton dominated.

The same, for slightly different reasons, goes for Monza and as such these two races give Hamilton a golden opportunity to reduce Vettel's 14-point lead. And he needs to, because Singapore, two weeks after Monza, is as close to a Ferrari 'gimme' as you can get.

As such, Hamilton needs to have located his A game over the summer break - something that has eluded him too many times this season, after disappointing performances in one way or another in Russia, Monaco, Austria and Hungary this season.

Four races out of 11 in which he has failed to get the best possible result for his car is too high a ratio for Hamilton to win the championship against opposition as strong as Vettel in this year's Ferrari.

Spa has been a mixed hunting ground for both title contenders - each has won there only twice.

And Vettel has his own concerns - Spa is his team-mate Kimi Raikkonen's favourite track and the Finn could well be Ferrari's pace-setter this weekend.

In such circumstances, Vettel would be glad for Ferrari's clear - if unspoken - philosophy of favouring the four-time champion in pretty much every possible way, a strategy Mercedes are choosing not to follow with Hamilton and team-mate Valtteri Bottas.

Elsewhere, there will be interest in how close Red Bull can get to the front-runners on a track that exposes the power limitations of their Renault engine but where the chassis can be expected to excel around the succession of demanding sweepers that make up the middle sector of the lap.

And McLaren - after a rare weekend as best of the rest in Hungary, delivering Fernando Alonso a sixth-place finish and an unexpected fastest lap - will be steeling themselves for another difficult weekend.

A Honda engine upgrade is due in Spa - at least that's the word; Honda have not yet publicly said it will be there. Will it amount to much?

It needs to, not least because McLaren are leaning heavily towards dropping Honda for next season and switching to a Renault customer deal. If this update is underwhelming or late - and the last one was both - could it be the end of the road for the McLaren-Honda partnership, and by extension Honda's latest sojourn into F1? 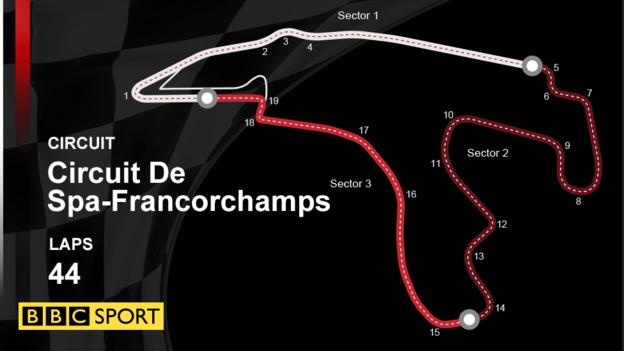 What's in the forecast?

Early weather forecasts for Saturday and Sunday in Spa are bleak, with thunderstorms and showers predicted.

Rain at Spa? That sounds tasty...

Most of us are familiar with the Muscles from Brussels, aka Mr Jean Claude van Damme.

But did you know Oscar winner and screen beauty Audrey Hepburn - or Edda Kathleen van Heemstra Hepburn-Ruston - was also a Belgian native?