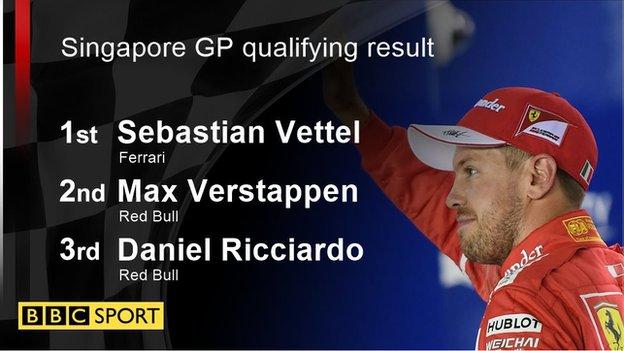 Ferrari's Kimi Raikkonen was 0.578secs slower than the German, with Hamilton 0.635s adrift of Vettel.

The result gives Vettel a golden opportunity to reclaim the championship lead from Hamilton on Sunday.

Hamilton took the outright lead for the first time this season with victory in Italy last time out, but Vettel has the chance not only to overturn the Briton's three-point advantage but to open a significant lead.

Mercedes have lacked pace on this tight and twisty track, as they always expected they would, and Hamilton does not appear to have the pace to challenge the Red Bulls and Ferraris in front of him.

Ferrari had lacked pace on Friday, when Vettel had a spin and brushed a wall, but Vettel looked stronger from the start of running on Saturday and saved his best to last.

"I shouted louder on the radio than probably ever before," Vettel said. "I love this track. The car was tricky but it came alive and was getting better and better as the night came on. I am really glad we got it done.

"I knew we had it in us. It was a bit of a struggle to get there, but we did it.

"I was lucky on my final lap, I brushed the wall out of (Turn) 19; actually it was not a brush it was a hit, but it was OK until the final corner when there were big vibrations. I was very happy obviously.

"Tomorrow is a long race. These guys [Red Bull] are very quick and I think it will be a close race."

Ricciardo, who was quickest in both practice sessions on Friday, said he was "still confident" he could get victory on Sunday and the stage is set for a titanic struggle in the race.

Hamilton will take little consolation from his position but some might be in his advantage over team-mate Valtteri Bottas, who was a massive 0.684secs behind the triple champion.

The Finn's struggles were emphasised by the fact he was only 0.203secs ahead of Renault's Nico Hulkenberg, who edged the McLarens of Fernando Alonso and Stoffel Vandoorne into eighth and ninth places.

Vandoorne had the most convincing weekend of his rookie season so far, an impressive feat on a demanding track where he has never driven before, but Alonso beat him by 0.219secs in the end.

Toro Rosso's Carlos Sainz completed the top 10, with Renault's Jolyon Palmer failing to make it through into the top 10 shoot-out by just under 0.3secs.

The gap between the Englishman and team-mate Hulkenberg in second qualifying was 0.83secs, illustrating why Renault have decided to drop Palmer for next season and replace him with Sainz.