Mercedes' Lewis Hamilton is looking for a "miracle" to limit the damage to his title hopes in Sunday's Singapore Grand Prix, which starts at 13:00 BST.

Hamilton qualified fifth, with championship rival Sebastian Vettel of Ferrari on pole, giving the German a strong chance to retake the lead.

"Fifth place is definitely not good compared to first," said Hamilton, who is three points ahead of the German.

"I am going to have to figure out how to pull a miracle out of somewhere."

Hamilton said he was pleased with his performance - he was 0.684 seconds quicker than team-mate Valtteri Bottas - but that the Mercedes was struggling at the tight and twisty Marina Bay street circuit.

He ended up 0.635secs slower than Vettel, with the Red Bulls of Max Verstappen and Daniel Ricciardo and the second Ferrari of Kimi Raikkonen also ahead of him.

"I gave it everything," said Hamilton, who won the previous two races in Belgium and Italy.

"I got everything I could out of the car. I am happy with my performance, I am just frustrated we weren't able to be quicker and compete with the Ferraris.

"That's a seriously healthy gap. It's strange how it goes from one track to another. Hopefully the next races are more in our direction.

"We have seen they are very good on the low-speed circuits. The characteristics of our car don't like this track, that's for sure.

"It is a long circuit with a lot of corners so you imagine one of the shorter circuits where we had the deficits, like Hungary, give it another 10 more corners and it would be very similar there.

"It's just our car does not like this characteristics of this circuit and it's something we need to improve for next year." 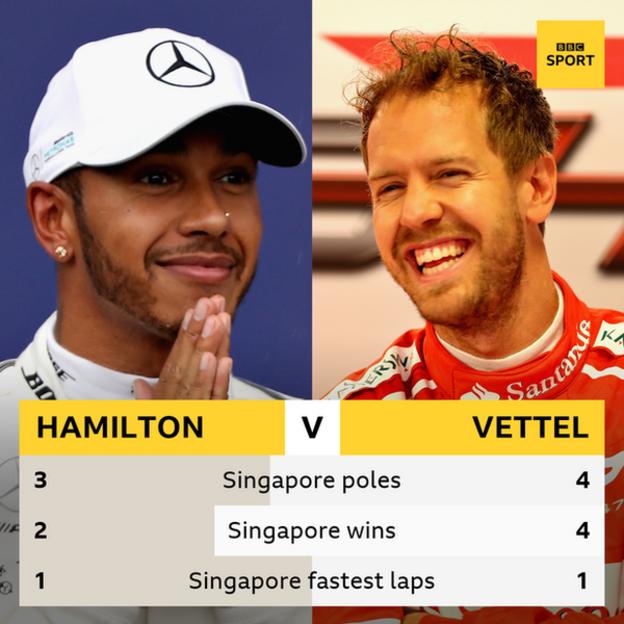 'I am not too bothered about other people'

Vettel, meanwhile, said he was not thinking about the championship battle, which swung back in Hamilton's favour after his win in Italy.

"We have a long race, a lot of things can happen," said Vettel, who holds the record for Singapore GP wins with four, the last coming in 2015.

"Grid position is crucial but still it is a long race.

"The fact our car was good this evening is good for tomorrow. I am racing Max and Daniel. I am not too bothered where other people are."

Hamilton added: "It's very hard to overtake so it's going to be a train."