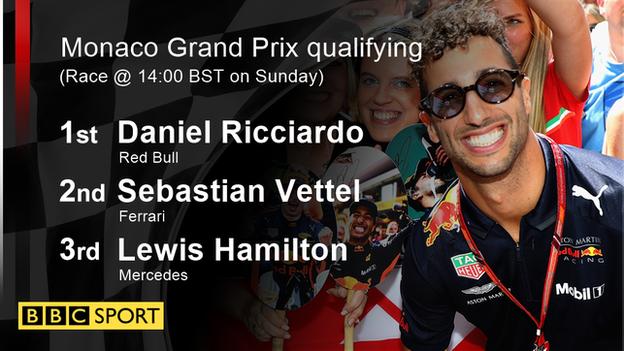 Daniel Ricciardo will start the Monaco Grand Prix from pole after dominating qualifying while Red Bull team-mate Max Verstappen will line up at the back.

Red Bull could not repair Verstappen's car in time to get him out after a practice crash, leaving Ricciardo to blitz Mercedes and Ferrari.

Red Bull have dominated the weekend so far and looked set to lock out the front row until Verstappen's costly error in final practice.

The Dutchman caught the inside wall at the second Swimming Pool chicane with his right front tyre and catapulted into the barriers on the outside.

The impact damaged both front and rear suspension on the right-hand side of the car and the damage was too extensive to be fixed in the two hours and 15 minutes between the end of practice and when he would have needed to get out to do a lap in first qualifying.

To add insult to injury, Verstappen has a five-place grid penalty for an unauthorised gearbox change because the team discovered a leak from a crack in the gearbox as they were preparing the car for qualifying, but it is academic as he will start from the back anyway.

One Red Bull driver always looked set for pole after Ricciardo set the pace in all the practice sessions leading up to qualifying, each time just pipping Verstappen.

I don't think I could have threatened Daniel's time today

After Verstappen ruled himself out, making an error for the sixth race in a row and raising questions about whether he needs to change his approach to his racing, Ricciardo was in a league of his own and was fastest in all three parts of qualifying.

His pole time of one minute 10.846 seconds came on his first run in the top-10 shootout and at the time was more than 0.4secs clear of anyone else, a huge margin.

Vettel closed in on his final run to end the session 0.229secs adrift, and was 0.193secs ahead of Hamilton.

Ricciardo: "We didn't change much on the car this weekend. I have just been able to build up to it and have some fun. I love this race and it's a pleasure to drive. It has been awesome."

On Verstappen's incident: "To be fast you can't think about those things. We need to push it but you don't need to over-drive it. We are both pushing each other and it is no surprise these things can happen, When you're lapping 1:10s, 1:11s, there is no room for error."

Vettel: "I was pretty happy. There is always the feeling there is a little bit [more]. I don't think I could have threatened Daniel's time today.

"Well done to Daniel, he owned the qualifying session, we were playing around with the set-up quite a bit to squeeze everything out. We have put ourselves in a good position, we put ourselves as close as well could and we see what we can do in the race."

Hamilton: "We knew we weren't as quick as him [Ricciardo]. We did the best we could and the car was in a good place. My last lap, I was up 0.27secs [after the first sector] but I lost it in the middle and last sector, so naturally not happy with that. That wouldn't have been enough anyways for pole but it would have made a difference, obviously I would have been second. You can't always get it perfect and I live to fight another day."

The battle behind the big six

Ocon impressed in emerging as best of the rest, pipping McLaren's Fernando Alonso by just 0.049secs.

Alonso was just 0.02secs ahead of Renault's Carlos Sainz, who beat team-mate Nico Hulkenberg, in 11th, on merit in qualifying for the first time since joining Renault for the last four races of last season.

Who will win in Monaco?