Mercedes Formula 1 driver Valtteri Bottas is "disappointed and amazed" that he is yet to win a grand prix in 2018. (Motorsport.com)

A pitch from F1 bosses Chase Carey and Sean Bratches convinced Mercedes to back the 2019 German Grand Prix. (Autosport)

Haas' team boss Guenther Steiner says the team will not be distracted by "gamesmanship" in Singapore, following Romain Grosjean's disqualification at Monza. (Reuters)

Mick Schumacher, son of Formula 1 legend Michael, won all three races over this weekend's round of the Formula 3 European championship at Nurburgring. (F1i.com)

Mercedes boss Toto Wolff believes the team's world champion Lewis Hamilton "is the best driver of recent years" but he finds criticism of the Briton's Ferrari rival Sebastian Vettel "not quite fair". (Die Welt, via F1i.com)

Mercedes are trying to work out the reason behind Ferrari's pace difference in qualifying compared to the race at the Italian Grand Prix. (Grandpx news)

FIA president Jean Todt says suggestions that Formula 1 will need to go fully-electric in the future are "nonsense". (Autosport)

Raikkonen has been told he will be released when his contract expires at the end of this season. (Fox Sports)

Meanwhile, Mercedes driver Lewis Hamilton says Raikkonen will be a great loss to the sport if he leaves F1 at the end of the season. (Grandpx news)

Red Bull driver Max Verstappen will struggle to land a drive with a top team, because world champions like Lewis Hamilton and Sebastian Vettel will not want him on their team, according to former F1 chief Bernie Ecclestone. (Beyond Victory with Nico Rosberg podcast)

However, Verstappen says data gained from Toro Rosso is "very promising" as Red Bull continue to talk up their switch to Honda power units for next season. (GP Fans)

Haas driver Romain Grosjean admits there was a moment in his career where he almost gave up on motorsport ambitions and followed his passion for cooking. (F1i.com)

Former Ferrari, Tyrrell, Benetton and Prost team official Joan Villadelprat is worried about McLaren's future in Formula 1 and says he can "hardly believe" the direction of the team where he began his career. (Sports Mole)

Fernando Alonso has had his first test of an IndyCar on a road course, driving an Andretti Autosport car at Barber Motorsport Park in Alabama. (Fox Sports)

Toro Rosso have posted a picture of reserve driver Sebastien Buemi having a seat fitting, sparking rumours the 29-year-old Swiss could be making a return to F1. (Motorsport Week)

Esteban Ocon's ties to Mercedes were a turn-off for McLaren when it came to deciding who would partner Carlos Sainz in 2019, team boss Zak Brown has revealed. (Autosport)

Toro Rosso are considering a longlist of 10 drivers for 2019, according to Red Bull motorsports consultant Dr Helmut Marko. (Speed Week via F1i.com)

FIA race director Charlie Whiting says he may have a "little chat" with Max Verstappen, after the Red Bull driver accused the race stewards of "killing racing" at the Italian Grand Prix. (Planet F1)

Ferrari could reveal their drivers for 2019 on Thursday, a decision that might see Kimi Raikkonen announce his retirement. (Autoweek)

Red Bull say they will quit Formula 1 after 2020 if Honda engines do not help them become world title contenders.(Fox Sports)

Fernando Alonso thinks McLaren's reliability has "gone backwards" because of a high number of retirements. (Formula1.com)

Lewis Hamilton is set to host a fashion show for his new clothing range. (Sun)

Russian driver Daniil Kvyat is close to a return to Formula 1 in 2019 with Toro Rosso. (Autosport)

Ferrari's plan to replace Kimi Raikkonen with Sauber driver Charles Leclerc is back on. (Motorsport)

Championship leader Lewis Hamilton believes he has found a "magic" mentality that is helping him get the better of the Ferraris. (Sky Sports)

Nico Rosberg has admitted he is a fan of his former Mercedes team-mate Lewis Hamilton. (Star)

FIA race director Charlie Whiting says he will be keeping a watchful eye on potential team "alliances" in the future. (F1i.com) 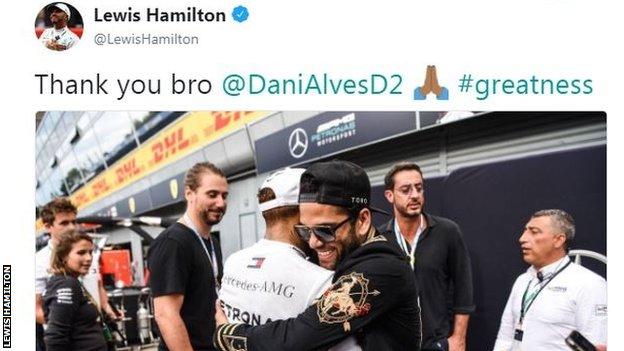