Daniel Ricciardo says he is "done with" his "cursed" Red Bull car after an eighth retirement of the season, and said he "doesn't see the point of doing the next two races". (Fox Sports Australia)

Lewis Hamilton has revealed he clinched his fifth world championship just days after the death of his grandfather. (ESPN)

Max Verstappen, who won the Mexican Grand Prix, said his good form is down to some advice from his father and former F1 racer Jos. (ESPN)

Brendon Hartley received a five-second time penalty and two penalty points on his license for causing a collision with Esteban Ocon during the Mexican GP.(F1 Today)

Haas driver Romain Grosjean said that having a high-altitude circuit, such as the Autodromo Hermanos Rodriguez in Mexico, on the F1 calendar, does not make any sense. (GP Blog)

Brendon Hartley said he was "not allowed to comment" on a remark he made disputing Toro Rosso's claim that Pierre Gasly's Formula 1 car was damaged last weekend. (Motorsport)

Sauber's Tatiana Calderon will get her first test of a Formula 1 car during a filming day at the Autodromo Hermanos Rodriguez next week. (ESPN)

Sebastian Vettel has suggested the Red Bulls may self-destruct in Mexico on Sunday after they locked out the front row. "The Red Bulls are very fast and hard to beat but maybe they will beat themselves," said Vettel. (Planet F1)

Fernando Alonso says he was "not too proud" of his qualifying lap for the Mexican GP, but admitted his result of 12th was still great for McLaren. (Autosport)

Former Sauber and Haas driver Esteban Gutierrez says he still has a chance of returning to F1 as George Russell's team-mate at Williams in 2019. (F1i.com)

Haas driver Romain Grosjean admits he is worried about picking up any penalty points in Mexico. If he gets two points for an infringement of the rules he will face a one-race ban. (Grand PX News)

Brendon Hartley says Toro Rosso's upgrade for Mexico has given him "what I've been asking for all season". (Motorsport)

Toro Rosso team principal Franz Tost said that Hartley "has to improve his performance if he wants to stay in the team" for 2019. (Fox Sports)

Haas' Romain Grosjean says the hypersofts tyres are so bad that it feels "like driving in the wet". (Motorsport)

Charles Leclerc wants "immediate" wins when he moves from Sauber to Ferrari for the 2019 season. (GP Fans)

Valtteri Bottas believes he would be fighting Lewis Hamilton "flat-out" for the championship without the bad luck that has often set him back this season. (F1i.com)

Lewis Hamilton says winning a fifth Formula 1 title would be his proudest achievement. He will clinch the crown should he finish in the top seven in the Mexican Grand Prix. (Sky Sports)

Hamilton has blamed a Mercedes water-pump issue that led to a "massive" problem on his car, for last weekend's disappointing United States Grand Prix finish in Austin. (Autosport)

Hamilton's Mercedes team-mate Valtteri Bottas has said he would be fighting "flat out for the championship" against the Englishman, if he did not have the bad luck he describes as a "joke" early in 2018. (Crash.net)

F1 legend Sir Jackie Stewart has said Hamilton should go "on and on" in the sport now due to it being so "low risk". (Evening Standard)

Red Bull driver Daniel Ricciardo says he does not remember "crossing paths with a black cat" following a "complex and confusing" 2018. (F1i)

Hamilton says F1 still has "fundamental issues" that prevent exciting racing, such as big performance gaps between the top teams and the rest. (Autosport)

George Russell's talent alone, not his links to Mercedes, was the reason Williams signed the 20-year-old Briton to drive for them next season, says deputy team principal Claire Williams. (Crash.net)

Red Bull have ruled out the signing of Hamilton from Mercedes that would see both him and Max Verstappen become team-mates. Red Bull have said the pair's egos would be "more than a challenge to the team". (Sky Sports via Planet F1)

Ferrari boss Maurizio Arrivabene has said that the biggest threat to F1 is the rise of virtual gaming. Arrivabene believes racing fans are finding gaming on the PlayStation and Xbox more fun and entertaining than watching the real thing. (F1i)

Two-time F1 world champion Fernando Alonso feels a full IndyCar season would have been "too demanding" to attempt in 2019. (Crash.net)

Kimi Raikkonen says he is "very happy" to be taking on a "challenge" at Sauber. The Finn will leave Ferrari at the end of the season. (Sky Sports)

McLaren boss Zak Brown says Stoffel Vandoorne has not been "aggressive" enough during his two-year spell with the team. (Planet F1)

Vettel does not appear to be as happy at Ferrari than at former team Red Bull, says says former F1 driver David Coulthard. (GP Fans, via Channel 4)

Hamilton thinks he gave Red Bull driver Max Verstappen "too much space" in their battle for second at the United States Grand Prix as he had to think about the "long game" in trying to secure the drivers' title. (ESPN)

Mercedes had to modify a wheel rim design for the US GP because of the risk that Ferrari may have launched a post-race protest. (Autosport)

The Force India and Haas teams are annoyed at the leniency of Renault driver Carlos Sainz being given only a five-second penalty for cutting a corner on the opening lap of the US GP. (Planet F1)

Valterri Bottas has blamed "excessive tyre wear" for his failure to contain Vettel during the US Grand Prix. (F1i)

Hamilton has questioned Mercedes' race strategy in Austin, after he missed out on winning the World title by finishing third. (Sky Sports)

Hamilton took Stranger Things actress Millie Bobby Brown for a drive around the circuit in Austin and posted an image with the 14-year-old on social media. (Instagram) 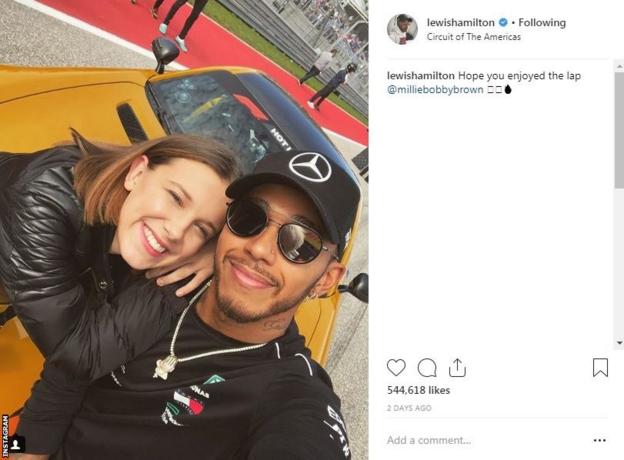