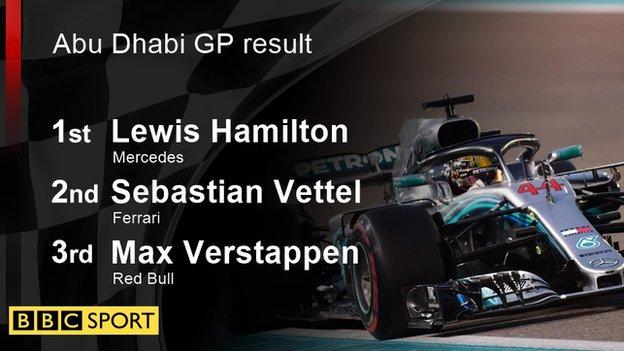 Lewis Hamilton won the Abu Dhabi Grand Prix to end the season in which he clinched his fifth World Championship on a high.

It was the 11th victory of the year for Hamilton, who dominated the race with a controlled drive.

Hamilton and Vettel then each shared an embrace with Alonso, demonstrating their respect for each other's abilities.

The three drivers hold 11 of some of the most recent World Championships won in a golden era for driving talent in the sport.

Vettel took second after Hamilton's team-mate Valtteri Bottas faded to fifth, which means the Finn ends the season without a victory.

It started with a bang

Renault's Nico Hulkenberg emerged unhurt from a frightening-looking accident in which he was pitched into a roll and landed upside down in a first-lap clash with Romain Grosjean's Haas.

Hulkenberg sounded scared as he said to the team: "I'm hanging here like a cow. Get me out. There's fire."

But once the fire was extinguished and the car righted, he was able to climb out unaided.

Not as easy as it looked for Hamilton

Hamilton's evening under the lights of the attractive but characterless Yas Marina circuit was complicated when Mercedes pitted him earlier than expected during a caution period caused when Kimi Raikkonen's Ferrari stopped on the pit straight.

That was on lap seven of 55 - nine laps earlier than Bottas' first stop - but Mercedes were covering one of their rivals potentially doing the same thing.

It meant a race of careful driving and tyre management, but Hamilton handled it well, to re-claim the positions he had lost one by one as his rivals pitted.

Behind him, the race came to a tense climax as the differing strategies of Vettel and the two Red Bull drivers converged.

Max Verstappen was closing on Vettel as the second Red Bull of Daniel Ricciardo closed on the Dutchman.

But both Red Bull drivers lost time when they came upon the lapped car of Pierre Gasly as it was suffering an imminent engine failure with smoke pouring out of it.

That gave Vettel breathing space and locked the Red Bulls in their positions.

It was a disappointing end to a bold attempt by Ricciardo and Red Bull to benefit from a different strategy by running very long to their first pit stops, but in the end it made little difference.

A low-key end for Alonso

Fernando Alonso's illustrious career ended with an 11th place, just out of the points. The McLaren, which started 15th, was just not quick enough for him to do any more.

There was time for one more bit of radio magic, though, when his engineer in the closing laps said: "Go and get a point."

Actually, he has 1,899 so it would have made a round 1,900, but he could not catch Kevin Magnussen's Haas - not helped by a five-second time penalty for cutting a chicane when he missed his braking point pushing while chasing the Dane.

Lots of hard work designing and building new cars, pre-season testing and then a new season starts in Melbourne, Australia in March next year. It'll be there before you know it.