Irvine described Vettel as "massively overrated" and says he can't understand how the German secured four successive titles between 2010 and 2014.

He also said Lewis Hamilton is the best driver of this era, but the British five-time world champion "isn't even close" to Michael Schumacher.

Northern Irishman Irvine raced for Ferrari from 1996-99 and finished runner-up in the 1999 championship, also competing for Jordan and Jaguar in a colourful career that included four race wins.

Irvine, now 53, doesn't hold back when talking about the current stature of the sport.

"Formula 1 was still very, very popular when Michael and I were racing," he said. "I think it was a more exciting era but it's less popular now."

Despite admitting he follows Formula 1 with less interest than when he used to compete in it, Irvine isn't shy about commenting on the current crop of drivers.

"I think Lewis is in a different league from all of them," said Irvine, although that praise is tainted by comparison. "He's not in Michael's league and I don't even think he is close, although he's racking up lots of wins. He's got the best car, there are more races and the competition is debateable.

"I think Vettel is good if he is at the front and doesn't have anybody to race. When you watch Lewis race, he's focused on racing and Lewis is really focused on getting ahead of the other guy.

"Vettel, when he is racing is someone, is focused as much on the other guy as he is on where he is going and inevitably crashes into the other guy, which happens nearly all the time.

"I think Vettel is a good driver, but as a four-times world champion, I just don't see it. I think he is massively overrated, he's a one-trick pony and Lewis has a much broader talent.

"Michael was on it every day, like Senna, but Lewis has his off days," he added. "If you look over the two years Lewis and (Jenson) Button were together, Button actually outscored him over two years.

"No-one ever did that to Michael, his level of performance was consistently higher.

"Lewis is an amazingly talented driver. When he first came to Formula 1 he was fantastic to watch and his overtaking was second to none. He's probably a better overtaker than Michael was, but for pace, and consistency over a whole weekend, over a whole year, I don't think anyone touches Michael, even Senna."

Senna was a flawed driver

"I think Michael was probably the best ever. I think Senna's technique was flawed. He was this amazingly talented driver and had an amazing touch, but he had a couple of techniques that weren't correct and he didn't look into everything.

"I remember at the Japanese Grand Prix, Michael was fastest and I was second fastest, in my first grand prix into the pit lane. Senna was only fourth of fifth.

"Michael practiced the pit entry and Senna didn't, so there's things that he missed. I'm a huge fan of him but I think Michael would have, well Michael did beat him, when they were racing.

"Over one lap Senna was an amazing driver, but I think his technique was slightly flawed. I couldn't have faulted Michael's technique.

"Technically, he wasn't that great but his actual talent with his feet, arms, feel and anticipation were second to none.

"There were corners I couldn't do what he was doing. Then he would just copy me in the corners I was quicker than him.

"I remember Silverstone I was much faster at the last corner and he couldn't figure out what I was doing. He'd always go through the telemetry and figured it out, then he'd just copy me. So that was the problem for me, he just had and amazing talent which you can't copy." 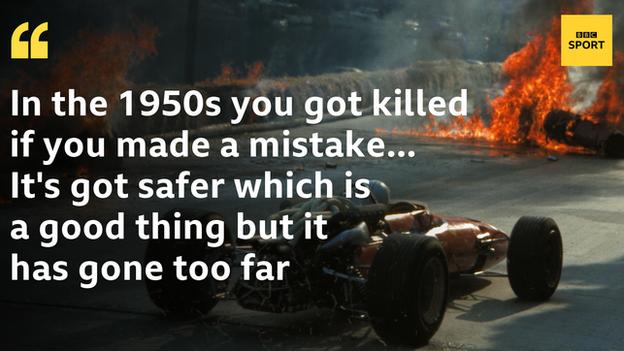 It's evident Irvine still cares about the sport, just not in its current guise and he craves a return to the Formula 1's roots.

"I don't watch it anymore because it bores me," he admitted. "I watch the cars go around the circuit and I think this is incredibly boring because it is so flat.

"I think manufacturers should not be allowed in Formula 1. I think they should be allowed in as engine suppliers and that's it," Irvine added.

"Ferrari has so much power and it sucks a lot of energy from the surrounding teams. I think Mercedes have too much financial might, causing the same problem.

"It's an evil necessity. It was great for me because they paid us a lot more money because of the pure torque of the manufacturers financially, but I think it lessens the sport a little bit.

"It's quite an in-depth thing and I think it probably needs to fall way back in financial terms before they can rebuild it and make it what it was, which was more gladiatorial and raw.

"There are many things that need to change, and each thing that you change would have a knock on effect. But the new owner has paid a lot of money for it so I don't think the are going to take the risks to do it."