A Mercedes on pole for the eighth time in 10 races. The world champions' seventh front-row lock-out this season. So it's same old, same old at the British Grand Prix after the excitement of Austria? Not so fast.

Silverstone has been full of surprises this weekend. From Lewis Hamilton losing out on pole position here for the first time in five years; through the unexpected pace of the Ferraris - or one of them, anyway - and Red Bulls; to the fact that this might - just might - for once not be a race in which drivers make only one pit stop.

In short, the chances of Formula 1 distracting attention from the competing attractions of England v New Zealand in the Cricket World Cup final and Federer v Djokovic at Wimbledon are good.

After the blip of Austria, where a combination of high temperatures and altitude took Mercedes out of their car's cooling window, forced them to run their engines de-tuned and left them struggling for pace, the silver cars were expected to return to dominant form at a race Hamilton has more or less made his own over the last few years.

But it has not quite worked out that way.

Sure, Valtteri Bottas and Hamilton will line up on the front row together, but Ferrari and Red Bull have been closer than expected and it is far from a given that the Mercedes will run away with the race.

Even if they do, there is plenty at stake.

After a strong start to the season, Bottas has had a bit of a dip in recent races. Clawing back a few points on Hamilton after the Briton's errors in Austria was useful. But the Finn is still 31 points behind as the season reaches more or less its halfway point. So pole at Silverstone - albeit by just 0.006secs - was a decent next step.

He knows that the next few races are critical - not just because of his need to claw back some ground in the title race but because of the need to convince Mercedes boss Toto Wolff that he deserves a new contract for 2020, with rumours around Max Verstappen and Mercedes continuing to swirl as the driver market silly-season gathers pace.

"The championship fight is still on," Bottas said. "I am chasing but there are so many races to go. It is a lot up to me and my performance and every single opportunity I need to get those and if I don't Lewis is going to be far away.

Hamilton, though, is chasing a sixth British Grand Prix victory - which would be a record. Victory on Sunday is very important to him.

And while he was not happy to lose out to Bottas, he emphasised that a slight dissatisfaction with his performance was at least partly down to a car set-up that he had chosen because it was better for the race.

"It's a long race," Hamilton said. "We've got a great crowd here and hopefully I can do something good for them."

Ferrari arrived in the UK playing down their chances at Silverstone, emphasising that they did not expect to be as competitive as in Austria two weeks ago.

This was despite the fact that they have an advantage on the straights, and Silverstone is now even more power-sensitive than it already was because the first two corners of Abbey and Farm, and the super-fast right at Copse are now all flat-out in qualifying, making those sections effectively straights.

In fact, Ferrari - or rather Charles Leclerc - have looked competitive over one lap all weekend. So after the 21-year-old topped final practice and second qualifying, third on the grid looked a slight let down, even if he was only 0.079secs off pole.

But Leclerc said he thought third was the best he could hope for, emphasising that Ferrari were still struggling with front-end grip, and indeed the final sector was where lap time was bleeding away for them.

On Friday, Ferrari were tearing their tyres apart through Copse and Becketts, and shedding huge amounts of time in the final sector. Things improved on Saturday, but they are concerned about race pace.

"If we look at the race simulations on Friday," Leclerc said, "I think it is going to be very difficult to fight with the Mercedes. At least Lewis' race run was very, very strong. We need to work on that.

"But Red Bull seems to be very quick also in the race runs.

"It is going to be tricky. If we manage to gain some positions at the start - it is a track that is quite hard to overtake - then we have some chances to keep them. But if not I guess it is going to be very difficult to fight with them."

That last comment seems to explain why Ferrari chose to start on the soft tyre, a decision Mercedes and Red Bull think was a mistake.

Leclerc had more than enough pace to get through second qualifying on the medium, and use it as a race-start tyre. But it seems they - correctly - realised they could not out-qualify the Mercedes, and that by doing the same as them on tyres they could not beat them. In which case, they might as well throw the dice on something different - and they went for the same strategy as in Austria two weeks ago.

"We wanted to (start on the soft)," Leclerc said. "In Austria it was not a bad choice. It was not what made us finish second there and we are pretty happy here, too."

Leclerc's team-mate Sebastian Vettel, meanwhile, has been lagging all weekend, and said he "struggled to feel the car".

That's three races in a row that Leclerc has been the more convincing Ferrari driver. It is looking more and more like the changes he made to his approach to qualifying after Canada were a breakthrough.

From 6-1 down in qualifying, Leclerc has it back to 6-4 and is building some serious momentum in the team after errors on Saturday - small and large - affected him in the early season races.

For Max Verstappen to be only 0.2secs off pole on such a power track is a seriously impressive performance, and it underlines the progress the Red Bull car made in Austria with some aerodynamic improvements.

Verstappen revealed that he had been suffering with turbo lag problems in qualifying and that without them he "could have fought for pole".

Given that the power-disparity between Red Bull's Honda engine and those in the Mercedes and Ferrari reduces in the race, and Verstappen's current superlative form, he could be a real danger for the race victory.

Team-mate Pierre Gasly, meanwhile, had his best weekend of the year so far, qualifying right behind Verstappen and just over 0.3secs adrift. The Frenchman has struggled on his promotion to the main team but at Silverstone intense work with the team paid off.

He hesitated when it was suggested to him it might be a breakthrough, saying he wanted to wait to see how the race went, but he admitted it was "clearly a massive step".

In the Red Bull junior team, Alex Albon's impressive start to the season continued with an excellent performance at what is effectively his home race.

Toro Rosso are trying hard to push the Thai side of Albon's identity - he does, after all, race under a Thai flag - and are hoping to dissuade people from lumping him in with Lando Norris and George Russell as a "British rookie".

But Albon has dual British-Thai heritage - through his English father and Thai mother - and as someone who was born in London and has lived nearly all his life in the UK, this is effectively his home race.

And what a good job he has done. Albon starts ninth, while team-mate Daniil Kvyat is down in 17th after being knocked out in first qualifying, when the Russian was 0.239secs adrift of the sister car.

"It's good," Albon said. "I can't lie. I'm happy with the performance today."

He is, he said, getting more and more comfortable with F1 and what is needed to get the best out of these cars.

"Even Paul Ricard and Red Bull Ring maybe as a car we weren't that quick but I was feeling a lot better just in terms of pace," Albon said. "It has come on from there. We made another step, just understanding the car and more and more what I want in the car and I feel in a happy place where I know what I need in the car to be quick.

"It's just these cars, they have so much downforce. Stability isn't really what I like in a car. I don't mind it moving around but that's not always the quickest way to have a car.

As for his debut season so far, Albon said: "I'm quite comfortable with it. It is becoming more and more normal, just more relaxed.

"At the beginning you're a bit edgy. Of course you still care about stuff but there's a lot more calmness about everything. Just like little things, maybe the scheduling and the run-plans. Even qualifying itself. You're in the rhythm now.

"You feel less stress about qualifying well because you have a long weekend to build up to it. Just the whole atmosphere feels a bit more relaxed because I am settling into it."

Albon, who is impressing all the right people at Red Bull, starts right behind McLaren's Lando Norris, who is comparing very well against team-mate Carlos Sainz in his rookie season. While George Russell is continuing to impress in the Williams and has so far completed a qualifying clean sweep on Robert Kubica.

Hamilton has a good few years in him yet, but the future for (at least half-) British drivers in F1 looks very positive indeed. 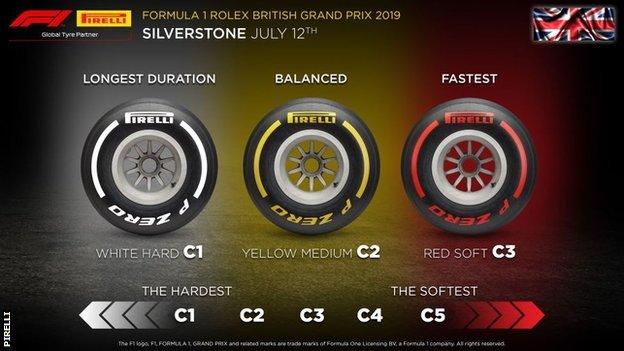 Most Grands Prix tend to be one-stop these days, despite the fragility of the tyres, which can only be pushed so hard before they overheat.

But the demands of the high-speed sweepers at Silverstone are moving things towards a two-stop.

Hamilton went through Copse at 184mph on his final qualifying lap. Verstappen said that in the five corners of Maggotts-Becketts-Chapel he was not braking at all.

"Yeah," he replied, with a little laugh. The first lift is into the left at Turn 12 - the third corner in the sequence - and then another for the right, which also needs a downshift to seventh. "The cars are really quick through there," he said, eyes sparkling and alive.

This is awesome - although arguably too much, because it reduces the challenge for the drivers. Copse should really be a true corner; Abbey, too. But it puts massive demands on the tyres. And on Friday's race-simulation runs many were struggling with heavy front tyre wear.

As a result, Pirelli say the quickest strategy is a two-stop, with two stints on the soft of about 13 laps each, followed by the final one on the hards - hence Ferrari's tyre choice - or medium-soft-hard.

Teams will inevitably try for a one-stop, as usual. But Gasly added: "It is not going to be a straightforward one-stop or two-stop."