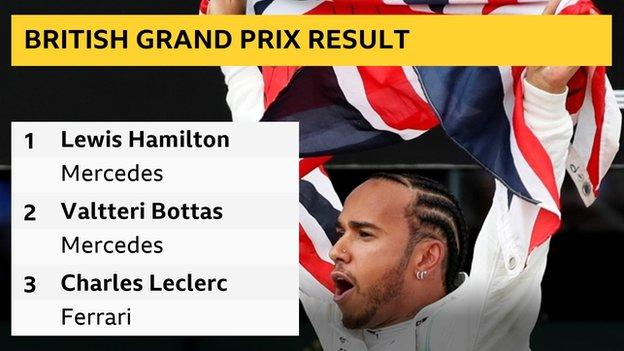 Battles throughout the field created a dramatic race - by far the best of the year so far - as Hamilton benefited from a safety-car period to take a lead he never lost after Valtteri Bottas had held back an early attack from his Mercedes team-mate.

Behind them, Ferrari's Charles Leclerc and Red Bull's Verstappen staged a duel for the ages in disputing third place for the first third of the race.

Their exquisite driving would have been the talk of the day had it not been for the collision between the Dutchman and Leclerc's team-mate Vettel, for which the German four-time champion was given 10-second time penalty and two penalty points on his super licence.

Hamilton's victory extends his championship lead to 39 points at the effective halfway point of the championship, but the discussion will focus on Vettel, and what many will perceive as yet another error in the heat of battle - the latest in a series over the past year.

How did Hamilton win it?

Bottas converted his pole position into a lead at the first corner, but Hamilton challenged hard over the first two or three laps, the Finn just managing to hold him off.

On lap four, Hamilton appeared to have taken the lead, going for the outside at Brooklands then cutting back and passing Bottas around the outside of the 180-degree corner of Luffield.

But he ran a little wide on the exit, Bottas came back at him on the inside and took the lead back into the 180mph Copse corner.

Their fight settled down, Hamilton sitting just over a second behind, until Bottas stopped for fresh tyres on lap 16, his decision to go for the same medium compound he had used at the start committing him to a second stop.

Hamilton, though, stayed out, clearly intending to go for a one-stop strategy, and when the safety car was called after Alfa Romeo's Antonio Giovinazzi crashed at Vale, he could make a pit stop, comfortably rejoin in the lead and cruise to the finish.

The safety car gave Hamilton the lead as a gift, but the indications were Bottas would have found it difficult to hold him off anyway, once he had committed to a two-stop.

Amazingly, Hamilton also took fastest lap on 30-lap-old hard tyres on the last lap, beating the mark Bottas had set a couple of laps earlier after a stop for fresh tyres.

His sixth British GP win moved him clear of Jim Clark and Alain Prost and puts him in a commanding position in this season's championship.

From the sublime to the ridiculous

Vettel inherited third place after Ferrari initially left Leclerc out when the safety car was deployed because he and Verstappen had pitted for fresh tyres only six laps before.

The advantage Vettel gained by stopping under the safety car promoted him to third, with Red Bull's Pierre Gasly between him and Verstappen.

Gasly soon let Verstappen through and the Dutchman homed in on Vettel, catching him on lap 37.

Verstappen passed Vettel around the outside of the fast Stowe corner but the Red Bull ran a little wide, giving the Ferrari driver a chance to come back at him.

Verstappen covered the inside but Vettel was committed and could not stop in time, ramming into the back of the Red Bull.

Vettel could have complained Verstappen made a second move back to the outside - saying over team radio at the time: "What was he doing?" - but it was only marginal and the stewards decided it was the older man to blame.

The German went over to Verstappen's cockpit after the race and shook his hand, adding to the press: "Well it was my mistake so obviously he passed me and then ran a bit wide which gave me the chance to come back then I looked for a second that he was going to the right and there would be a gap of the left which didn't open and by that time it was too late and I crashed."

Amid Hamilton's record, and the drama of the crash between Verstappen and Vettel, arguably the defining images of the race were provided by Leclerc and Verstappen.

They battled extraordinarily hard but entirely fairly for lap after lap and Leclerc held Verstappen off until the safety car-period on lap 20 ended the fight.

Verstappen clearly had much better pace, but Leclerc defended with exquisite judgement, as hard as is allowed, but always on the right side of the line of fairness.

A number of times Verstappen looked sure to pass, only for Leclerc's race craft to hold him off.

Their battle even continued in the pits. They came in together on lap 13 and although Leclerc's stop was quick, Verstappen's was even quicker and they exited the pits side by side, the Red Bull just nosing ahead.

But Leclerc was not to be denied. He attacked Verstappen into Turn Three, Verstappen went in too deep to Turn Four and the Ferrari was able to sneak back ahead.

They continued to fight again until the safety-car period and a delayed second stop for Leclerc put him at the back of the queue of the top three teams.

But he caught and passed Gasly and then won third place back after the collision between Vettel and Verstappen.

"It is the race I enjoyed most in my F1 career," said Leclerc.

It was a battle that will be remembered along with the famous tussle between Gilles Villeneuve and Rene Arnoux at the 1979 French Grand Prix as one of the greatest in F1 history.

Hamilton: "I can't tell you how proud I am to be here today in front of my home crowd. There's so many British flags out there and every year I see it and you think you get used to it but it feels like the first time and I'm forever grateful to everyone out here I hope you enjoyed the day."

Bottas: "I don't know what to say, congrats to Lewis, he got a free stop and got past me there. Not really my day but the pace was good. There are positives for yesterday in qualifying as I was quickest on track. I'll keep fighting this season, it's not over yet."

Leclerc: "It's great to finish third but today was very difficult. We were where we wanted to be in the first two stints, but the safety car meant we lost a couple of positions and I'm extremely proud of the battles we had on track."

The German Grand Prix in two weeks' time, a second 'home' race in succession for Mercedes, whose chassis base is a few miles down the road from Silverstone. They continue to look unstoppable, but Red Bull are coming on strong and surely Leclerc has to win one soon.