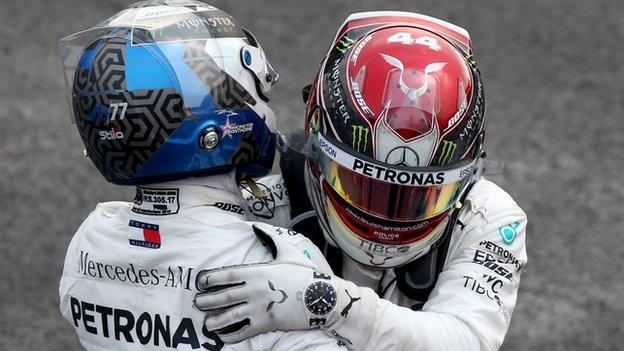 Lewis Hamilton made this one look easy, much as he has been doing all year, but the victory in the Mexican Grand Prix that took him to the brink of a sixth world title was nothing of the sort.

It was the Mercedes driver's 10th win in 18 races in 2019, but this season has surrendered to Hamilton because of the consistent excellence of the 34-year-old Briton and his team, which was again on display on Sunday.

Starting third, barged on to the grass by Ferrari's Sebastian Vettel on the run to the first corner, his car damaged quite significantly in a brush with Red Bull's Max Verstappen between Turns One and Two, which knocked him down to fifth on the first lap, Hamilton and Mercedes proceeded between them to steal yet another victory from Ferrari. Who admittedly - for far from the first time this season - hardly helped themselves.

It was a controlled, measured, clever race from Hamilton and his team, much as it has been a season in the same vein.

While Ferrari arguably sabotaged their own race by surrendering track position and the lead with both drivers at separate times, Mercedes, led by chief strategist James Vowles, made all the right calls, gambling on an early stop to grab the lead. And Hamilton made them work.

Would another driver have been able to do the same? We will never know. But certainly Vettel was impressed.

In the TV interview pen after the race, Hamilton playfully barged Vettel, making a humorous dig at the German's aggression on the run to the first corner.

Vettel first joked that Hamilton had "got massively lucky". And then said: "If you are a woman on this planet and you have this guy giving you a massage like he's treating the tyres, it's pure magic. Really well done to him that he made the tyres last."

Talk to Hamilton's engineers at Mercedes, and they will tell you similar things.

Hamilton has a reputation as a blindingly fast driver, whose success is based largely on his qualifying pace and clever race-craft.

But that underplays the subtlety of his technical understanding of car and tyres over a grand prix distance, and his ability to modify his driving to fit specific circumstances.

"He just has so many tools in his repertoire to adapt his driving," Mercedes chief engineer Andrew Shovlin said recently.

This was one of those days when that ability was on display.

After the first lap, a large strip of the edge of the right-hand floor on Hamilton's car was missing, probably from the clash with Verstappen. This would have affected the balance and grip of the car, making it more difficult than usual to make the tyres last.

And yet Vowles decided to pit Hamilton on lap 23, so he would take the lead from Vettel when the Ferrari driver made his stop later on. But it meant a 48-lap stint on the hard tyre, and holding off Vettel, who had 14-lap fresher tyres, for the final 34.

"We were not convinced," Mercedes F1 boss Toto Wolff said. "There were two main factors. We knew we had to take a risk. When you are starting third and sixth it is easier to come up with bold strategies provided you have a good car and fantastic drivers.

"So we knew we needed to do something different and then we saw [Renault's Daniel] Ricciardo going well on the hard tyre. We had quite some discussion and in the end what James and the strategy department opted for - to go long - worked out."

Hamilton said: "I can't tell you how happy I am. I woke up this morning and felt great. We struggled through practice and qualifying. I didn't know whether we'd be able to win. All the stuff that happened at the beginning... But I never gave up. I just kept pushing.

"I knew the car was damaged because it was behaving a bit funny so I had to change my driving style to make it work. I was chasing Seb down and I was like: 'I'm coming for you, man.'

"It never gets old. It always feels like the first time, and it was a damn hard race but collectively we did such an amazing job. Strategy-wise it was a bit risky stopping that early but I had to make it work and that's my job.

"I was up with Seb and we stopped super-early and I was thinking: 'Oh my God. I have 40-plus laps to do. There is no way I am going to make this work.' But then I just had to collect myself and drive in the smoothest way I could."

And so Hamilton goes to the US Grand Prix this coming weekend with a 74-point lead, and he needs to leave Austin with only a 52-point advantage to clinch his sixth title.

That means the only way Hamilton's team-mate Valtteri Bottas can prolong the championship 'fight' to the penultimate race in Brazil is if the Finn wins the race and Hamilton finishes lower than eighth.

In a normal race, that is just not going to happen.

If Hamilton's drive in Mexico was all understated excellence, he was helped on his way by his main rivals imploding.

Verstappen should probably have won, given a clean weekend, but he had anything but.

The Dutchman had pole taken away from him for ignoring yellow flags in qualifying and then his race unravelled in the first few laps, first when he lost places in his tangle with Hamilton, and then when he picked up a puncture passing Bottas. BBC F1 analyst Jolyon Palmer will look at Verstappen's weekend in his next BBC Sport column.

Meanwhile, Ferrari's weekend mirrored their season so far, somehow managing to fumble yet another good chance of victory.

This has happened so many times this year that it's easy to lose count - but this now makes it six races they should have won but didn't. And to take just the last three, a Ferrari has started all of them from pole, and the last two with a front-row lock-out, and not won any.

Mexico was arguably the biggest dropped ball of the lot. In Russia, there was a major controversy over some questionable team orders, but Charles Leclerc lost that race only because he was unlucky with the timing of a virtual safety car.

In Japan, Vettel messed up his start, which distracted Leclerc, who then did the same, and that put Bottas into a lead he was never to lose.

But in Mexico, Ferrari twice made active decisions to give up track position. First, they pitted Leclerc out of the lead, trying to ensure he protected against Red Bull's Alexander Albon, who had just pitted very early out of third place and was looking potentially threatening.

Then, when Vettel had the lead and Hamilton pitted behind him, they went with Vettel's suggestion not to stop next time around, which locked them into having to pass Hamilton on track to win the race.

The decisions made sense in the moment.

Firstly, the pre-race expectation was that tyre wear would be high, and that a two-stop was the most likely race.

Secondly, putting the two lead cars on different strategies - one on a one-stop and one on a two - is the most logical way to try to ensure at least one wins the race.

Thirdly, they thought Hamilton's stop was too early and that he would run out of tyres.

But the decisions ignored the evidence around them that Mercedes used to make theirs.

After the race, Vettel defended the team. Was it a missed opportunity, he was asked?

"Yes, of course if you start from the front row," he said. He added that "it's not as bad as it looks" because the Mercedes was just that bit quicker and their strategy gamble had paid off.

Ferrari team boss Mattia Binotto admitted they "could not be happy". But he added in mitigation that they decided not to stop Vettel when Hamilton pitted because they believed from the Mercedes' out-lap that Hamilton would be in the lead anyway, and so their best option was to run Vettel long - especially because they felt Hamilton was going to run out of tyres before the end of the race.

It's also true that the team behind, with less to lose, can take more risks. And that the Mercedes appears still to be a slightly faster race car than the Ferrari, even if the Ferrari has established a definitive edge in qualifying.

But it's equally true that a slower race car can win from the front - as Leclerc himself proved in both Belgium and Italy.

Leclerc's case in Mexico was particularly puzzling. He had pointed out in his interviews after qualifying how important it was to be leading in clear air, because at the high altitude in Mexico City a car running behind another quickly suffers overheating problems and has to back off.

This exact thing happened to Leclerc in the race - and he mentioned it afterwards. And yet Ferrari chose to put both their cars into that position.

Over the year, Ferrari have not been quick enough often enough to have challenged for the title even if they had delivered a perfect season.

But since the summer break, they very much have been quick enough. They now have six consecutive poles, and have locked out the front row three times. And yet they converted only three of those poles into victories.

It is this failure to deliver on their potential, this habit of grasping defeat from the jaws of victory, that cost them the title when they were capable of winning it in 2017 and 2018. And it will keep costing them if they cannot sort it out.